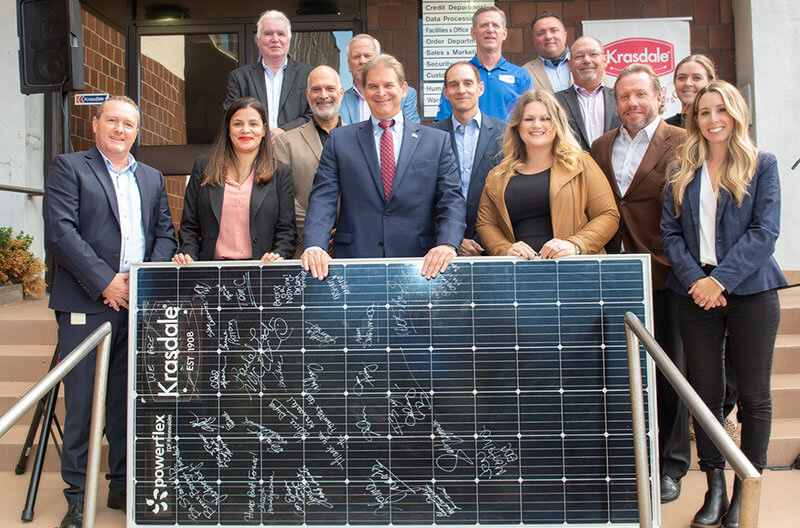 Company and local officials met Sept. 30 at the warehouse, where they got a first-hand look at the facility where the solar panels will be installed in addition to listening to remarks from key leaders responsible for bringing this project to life.

Speakers at the event included:

As part of the company’s agreement with the New York City Economic Development Corp. – the lease administrator on behalf of the city – Krasdale will have the opportunity to extend its current lease through 2041. The Hunts Point Food Distribution Center is the largest single-entry point into New York for the more than 19 billion pounds of food the city consumes each year, processing approximately 4.5 billion pounds. Founded in 1908, Krasdale has operated out of the same Bronx warehouse since the early 1970s and was one of the first businesses the city recruited to the Hunts Point Food Distribution Center.

Working with PowerFlex, a national provider of renewable energy infrastructure, Krasdale will install more than 6,500 panels at its warehouse, and the system will generate clean energy equivalent to offsetting 5.3 million pounds of carbon dioxide or removing 524 automobiles from the road annually.

“After nearly a half century in Hunts Point, we’re thrilled to be able to support our community by creating a greener New York,” said Krasdale President Gus Lebiak stated in an earlier press release. “Our focus has always been on giving back to the communities we serve, and this project represents our continuing commitment to the Bronx. We want to thank the City of New York and PowerFlex for partnering with us on this initiative.”

Designated a community solar project, the initiative will allow residents in the same utility area to share in the clean energy produced by the system. Roughly 300 residents are expected to qualify for this no-cost option, which will reduce their electric bills by 10 percent.

PowerFlex expects the installation process to take approximately nine months from start to finish, with completion taking place next year. PowerFlex’s team has provided solar solutions to some of the world’s largest corporations, including Amazon, PepsiCo and Target, among others.