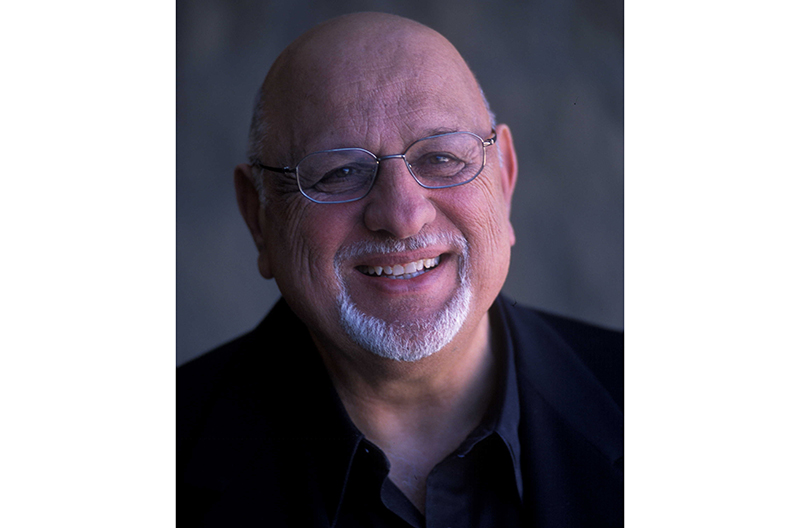 The late Eddie Basha Jr. has been inducted into The Shelby Report’s Food Industry Hall of Fame.

Born in 1937 in Arizona, he carried on the family legacy of operating Bashas’ Supermarkets, growing the company and acquiring Food City and AJ’s Fine Foods.

Trey Basha, Eddie Jr.’s son and president of Bashas’ Family of Stores, shared some insight into his father’s life story. Also offering some of their memories were his brothers and their cousin, Johnny Basha.

Eddie Jr.’s great-aunt Zelma took care of him while he was growing up, as the rest of the family worked in the grocery stores. It was Zelma, a budding artist, who inspired a love of art in Eddie Jr., Trey Basha said. She would draw pictures to entertain the youngster.

“Zelma and my dad formed a very unique relationship,” Basha said. “She really challenged my dad.”

Zelma was the reason Eddie Jr. went to Stanford University, he said.

When he came back from the university, she told him that he needed to start collecting art as a hobby. The two of them attended an art show in Laguna, California.

“They viewed all these different genres of art,” Basha said. “There were two small cowboy bronzes, and Zelma looked at him and said, ‘Eddie, that’s it. You should collect Western art. So he bought those two bronzes and the gallery is a result of 40 years of collecting art.”

Those bronzes are still in the Bashas’ art gallery. The Zelma Basha Salmeri Gallery of Western American and Native American Art features oil paintings, watercolors, acrylics, pastel and charcoal drawings. There also are pen and inks, bronze, wood and natural stone sculptures and wood-turned bowls, as well as basketry, pottery, kachinas and jewelry.

The museum has more than 3,000 pieces of art. It is open to the public during weekdays, with free admission.

Basha said his father became a mentor for several cowboy artists and the family became friends with many of them.

“You can see their personalities in their art,” he said.

Art was just one of Eddie Jr.’s passions – education was the other.

A history major in college, Eddie Jr. “was never fond of European or colonial history,” Basha said. “He was always enamored with the history of the West.”

“It was part of who he was,” Basha said of his father.

When Eddie Basha Sr. died at age 57, Eddie Jr. took over the company, which had 16 stores at the time. Eddie Sr., who was “very entrepreneurial,” according to Trey Basha, also had a dairy business. After Eddie Sr.’s death, the bank called all notes due, telling Eddie Jr. that his father was overextended and they had no confidence in him.

Basha said a family friend, Adolph Weinberg, went with Eddie Jr. to the bank and co-signed all of the notes. Basha said Eddie Jr. worked through all of the issues and started to grow the company.

Food City became part of the Bashas’ Family of Stores in the mid-1990s. The original Food City at 16th Street and Mojave was owned by Noah Billings, Basha said.

“He came to Eddie and said, ‘Eddie, I want you to buy my store.’ And my dad said, ‘OK, Noah, why me?’ And he said, ‘Because I know you’ll treat my people right.’ And so that’s how we ended up with the Food City format,” Basha said.

Johnny Basha is a cousin but considered Eddie Jr. as a father figure after losing his dad when he was 4.

He shared a story of accompanying Eddie Jr. to visit the sixth store Bashas’ opened on the Navajo Nation, in Dilkon, Arizona.

The Navajo chairman looked at Eddie Jr. and said he didn’t recall seeing a lease come across his desk, asking if someone else had signed a lease, Johnny said.

“He looks at the chairman and says, ‘You know, I don’t recall signing a lease either.”

Johnny said they both looked at him and the director of economic development and asked, who signed the lease?

“And we go, there is no lease,” Johnny said. The chairman looked at Eddie Jr. and “they both started cracking up, saying ‘we have no lease.’ They hugged each other and called each other brother. And that’s how the deal got consummated.”

Johnny said he would never forget that relationship they had in a handshake.

Ike Basha said Eddie Jr. had an amazing gift, where he could look at assets – any assets – and come up with ways to use them that “made all the sense in the world.” He gave an example of when Eddie Jr. was serving on the Chandler school board and recommended the school system lease the buildings on the weekends, so churches and other groups could use the auditorium that was sitting idle two days a week.

“That’s just one example,” Ike said. “There are countless examples of his ability to look and see and find utilization for idle assets. He was amazing with a set of plans. He could rearrange a store and add linear footage in his sleep. It was great to watch.” 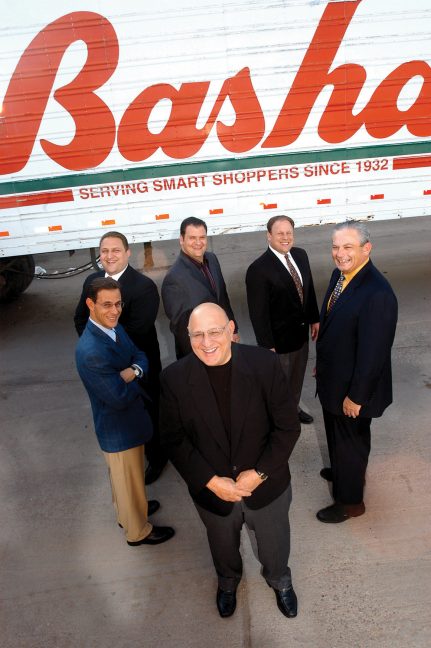 Michael Basha recalled how the art gallery came about. Eddie Jr. had moved from a small house to a larger one and they were trying to figure out how to get the paintings on the walls. “We just had these big collages,” he said. “I think he just finally outgrew the space.”

Eddie Jr. started filling space in the warehouse that used to be the distribution center but was no longer in use. He put some false walls in and started putting out the art. He used the space for philanthropic events.

The gallery has been expanded several times and is open weekdays and free to the public.

Ike Basha shared a story of his father, who was a “legendary prankster.”

“He was a practical joker,” Ike said. “He would call up and he would assume different voices, different accents and convince people that he was someone else.”

Trey Basha added that caller ID became the bane of their father’s existence “because then people knew the number that they were receiving.”

Ike said at Christmas one year, Eddie Jr. sent his assistant out to shop for “the most gosh-awful Christmas gifts she could find and tasteless, horrible, bad art – cheap.”

“He sent these gifts to friends from other friends. He created this network of gifts, these horrible gifts that these people received at Christmas,” Ike said.

He said one woman called the person whom she thought had sent the gift and asked why he would send her such an ugly necklace. “The gentleman said, ‘I didn’t send you anything for Christmas, let alone send you something gaudy.” It all started unraveling from there.

After serving on several educational boards, Eddie Jr. made an unsuccessful bid for governor of Arizona in 1994. His opponent, who won the election, was later indicted, convicted and sent to federal prison.

Trey Basha said Eddie Jr. knew about some of the alleged charges “but refused to bring those up as part of the campaign because he wanted to win on his own merits as opposed to disparaging his opponent.”

He said his father was going to run again in 1998, but he didn’t want to run against his friend, Jane Hall.

Mike Basha recalled the time they were getting ready to open the first Navajo Nation store, which was in Chinle, Arizona. It was 1982 and he was 15. His father didn’t want to fly because he was “deathly afraid” of small airplanes.

They made the several hours long drive up there and stayed overnight in a motel. His father told him there were no twin beds but they both would sleep in the king-size bed together.

“My dad, he snored. I don’t think I got a wink of sleep that night,” Mike said. “After opening the store, we made the long drive home.”

Eddie Jr. eventually overcame his fear of flying in small planes and the company had its own aircraft. About 10-12 years after their trip together, Eddie Jr. and Mike were flying up to one of the Navajo stores. “He said, remember that time we drove to Chinle? Why was I so afraid to fly? It’s so much faster to get to the stores this way.”

David Basha is the youngest of the four older boys (Eddie would later have two additional sons with his wife, Nadine). He is five years younger than Michael, six than Ike, seven than Trey.

He said because of the age difference, his older brothers would pick on him. He would cry to his dad about it. 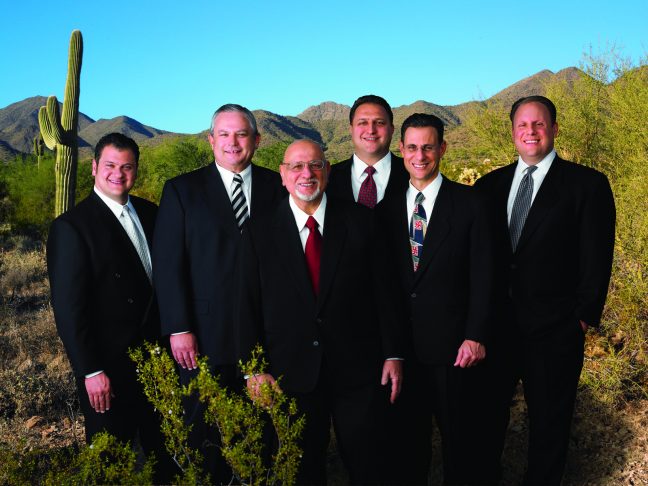 “My father told an elaborate story to me as a child and said, ‘Look, your mother was married before. And she had married a pilot, who unfortunately was shot down in the Vietnam War. And his name was Major McPherson, and your mom and Major McPherson had three sons. And when I met your mom and married her, I adopted those three sons, but you are my only son. You are my true son,” David said, adding he bought the story “hook, line and sinker.”

He said when they gathered at the dinner table at night, after dinner he would climb into Eddie Jr.’s lap and look at his brothers and say, “Only my dad. Only my dad.”

David said he believed the story for years. The truth came out during a visit with a cowboy artist friend of Eddie Jr.’s who had come to visit with his wife and mother-in-law. The mother-in-law was introduced as Mrs. McPherson.

“I lit up like a Christmas tree,” David said. “I looked up at my dad and asked if this was the boys’ grandmother. I think finally that’s where he had to break it to me that it was an elaborate lie. But he would tell you it was the best thing for my self-esteem growing up.”

The Basha brothers have many fond memories of their father, but remember him most as a loving dad and a man of great character.