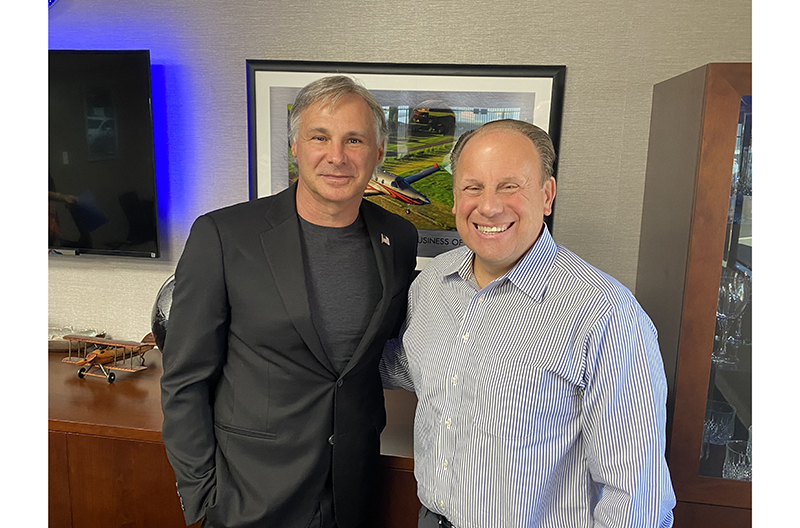 Bashas’ Family of Stores was sold to The Raley’s Companies in late 2021. Keith Knopf, president and CEO of the Northern California-based organization, and Trey Basha, president of Bashas’, recently sat down with The Shelby Report of the West’s EVP Bob Reeves to talk about the acquisition and the future of Bashas’.

Knopf, who had a background in apparel before joining the grocery industry, became COO of Raley’s in 2015, then was named president a year later. About a year after that, he was named CEO of Raley’s. As the company began to grow through acquisition, it formed a holding company and an enterprise shared services group. The totality of which is known as The Raley’s Companies.

Knopf is the president and CEO of The Raley’s Companies, which is a portfolio of retail, technology development and services, production and logistics. The company is owned by Mike Teel, who also serves as the chairman of the board.

According to Knopf, he and the leadership team at Raley’s put together a long-range plan in 2018.

Elements of that plan included growth through acquisition, market diversification, creation of a technology development and services entity, as well as acquisition of capabilities such as artificial intelligence in the space of pricing and loyalty, wholly owned “gig” delivery to support their already great e-commerce offering, and the addition of a best-in-class subscription capability and the leadership expertise to leverage and grow in this channel.

Among the guiding principles – the people matter most, established and strong brand equity, already well run with even more potential to unlock and to preserve and elevate that which was acquired and to respect the legacy.

By the fall of 2020 much of the plan had come to fruition or was in flight. What came next was an overture to Bashas,’ which led to a 15-month exploration and decision that brought Bashas’ and its 113 stores and 8,500 team members into The Raley’s Companies portfolio, Knopf said.

Knopf said he believes that the grocery sector in the United States will eventually be occupied by mega-nationals, pure-play tech operators and super regionals. Companies inspired by a purpose, in Raley’s case, “Changing the Way We Eat, One Plate at a Time,” will have a competitive advantage.

The super-regional companies “have necessary scale to compete against the large nationals but are also agile and highly tuned to the customer needs and expectations. In summary, they are big enough to compete but local in mindset and approach when it comes to treating our team’s members with respect and being a valued member of the community. And in The Raley’s Companies case, also possessing the skill and technical capability of any other in the market place,” Knopf said.

Guided by the set of principles framed in The Raley’s Companies long-range plan, Knopf said he and team began looking for other well-positioned independent – preferably family-owned companies – that were similarly situated.

The then Raley’s Companies CAO, Jen Warner (recently promoted to president of Raley’s), the much experienced and tenured CFO, Ken Mueller, and the CHRO Laura Croff did the heavy lifting. All along the way Chelsea Minor, The Raley’s Companies head of public relations and governmental affairs, helped navigate the industry and the rumor mill.

While the growth journey for The Raley’s Companies does not end with Bashas’, it was clear that Bashas’ was an obvious fit. A successful organization, steeped in a positive and 90-year family legacy, seeking its own path forward.

Consistent with the strategic growth guiding principles, Knopf said The Raley’s Companies values the expertise of the Bashas’ executive team and is committed to maintaining the office in Chandler, Arizona.

In fact, a new Bashas’ corporate office in Chandler will be announced in the not-too-distant future.

“This is not Raley’s east, it’s Bashas’,” Knopf explained. “We didn’t buy Bashas’ to make it Raley’s. We have no intention of bringing Raley’s into Arizona. We value all that Bashas’ is and we look forward to helping it become the next best, bigger version of itself. And we’ll work on that together.”

Knopf said the two markets are similar in many ways, with much of the same competition.

“What is brilliant about the strategy that Trey and his family put in place is how they looked at the market in segments,” he said. “They built brands to serve different customers’ needs and wants. Bashas’, Bashas’ DINE` Market, Food City and AJ’s are each uniquely positioned. Each has its own brand ethos but is connected through a talented and dedicated support team. This positioning, along with the digital assets and direct-to-customer acumen and leadership experience of The Raley’s Companies, will make for a powerful team.

“The Bashas’ stores serving various tribal communities also were a draw for Raley’s. It is truly a privilege to serve the tribal nations. It is a unique relationship that Trey and his family created 40 years ago, and it’s an honor to be part of its stewardship.” (See related article on page 38.)

Knopf said together, The Raley’s Companies including Bashas’ is stronger and more resilient. Among the intrinsic value of the partnership is the obvious increase in purchasing power. By collaborating on procurement, the companies realize better pricing. This said, merchandising decision-making still resides with each operating company. Moreover, savings are being realized on non-retail operating costs as well.

But the benefits go well beyond cost and expense, Knopf said.

The collaboration across the portfolio and the expanded knowledge and experience base have created great opportunities to learn from each other. Each operating company and brand within does something exceptionally well. This has created a kind of “internal share group.”

Knopf said Food City is fantastic at curating Hispanic offerings; AJ’s epicurean gourmet; Raley’s leads the market in health and wellness products and customer education on how food effects health and well-being; and Bashas’ on how to compete in a marketplace where other national grocers “hold the high ground.”

In addition, The Raley’s Companies has long held a top-rated digital customer experience. According to Deirdre Zimmermann, chief customer experience officer, those assets and capabilities will soon be incorporated into Bashas’. This is another example of accelerating speed to market in an efficient manner.

But The Raley’s Companies did not just jump in; according to Knopf, “We took the first six months to assess and learn. Our goal was and is to preserve and expand the best thinking and practice, regardless of where it came from. Like our mindset in California and Nevada, a comprehensive wage and salary analysis was completed and then a sizable investment made to ensure all our Bashas’ team members were on par or better than the respective market.

“A systems platform review was conducted by Craig Benson, The Raley’s Companies CTO, and the optimal solution adopted, and integration path charted. In some cases, the Bashas’ platform was the preferred and in others the Raley’s.”

When it came to people and leadership, “I believe in the integrity of the marketplace,” Knopf said. “I believe that people who understand the customer, who work closest with the stores, who live in the communities are the best positioned to decide how to go to market.”

Out of this perspective, incumbent Bashas’ leaders were engaged and retained, although some had reporting relationship changes given the The Raley’s Companies Shared Services leadership team.

Knopf added that The Raley’s Companies leverages a Shared Services Leadership team. This team comprises finance, human resources, technology innovation and support, legal, risk and asset protection, public relations and governmental affairs, strategy/PMO and digital direct to customer/marketing/ e-commerce. They help shape strategic direction and provide all the support services so the in-market presidents and operating teams can focus on leading the business day to day.

“We don’t need to duplicate services,” Knopf said, “but we do need great merchants, great operators and great advertisers in each respective market, with a deep understanding, informed by experience and data under one strategic umbrella but still very nuanced to the market. Trey and his Bashas’ leadership team ensure that expertise and continuity.”

Reiterating that he has no intention of bringing Raley’s into Arizona or of changing the Bashas’ banners, Knopf said the goal is to preserve the Chandler, Arizona-based workforce and support center while leveraging the shared services team when and where it makes sense.

Trey Basha said that Knopf’s first presentation was about how Raley’s values its team members, how they take care of them, how they value and give back to the community.

“That was a very important first meeting and very important first consideration for the Basha family, because it showed the alignment of values,” Basha said. “Keith [Knopf] and The Raley’s Companies have done everything they promised and more – even faster than was expected.”

Knopf said he and Basha both believe that “if it’s a partnership of like and fair-minded people, you can figure anything out. That was important to us. That was evident from the onset that this was a journey worth taking.”

Basha added that it was important to the family because the team members were so much a part of the company’s success over the decades and the family wanted to make sure they were taken care of.

Currently, Bashas’ management team is divided between the corporate office and the distribution center. According to Knopf, the team will have a new Chandler-based, modern office facility.

Chelsea Minor commented that an announcement will be made by the end of this calendar year. In addition, new store sites are also being evaluated.

Michael Basha, who leads the distribution center, trucking and repair maintenance group, will continue along with his team to headquarter out of the Bashas’ warehouse and logistic center, also located in Chandler.

“We look forward to opening additional Bashas’, AJ’s and Food City stores soon,” Minor said. There are several conversations already under way, according to Johnny Basha, head of real estate and strategic projects.

Knopf noted that it is “by the grace of Mike and Julie Teel that this goes on. It is their desire to serve the community and create great places for people to work and pursue their career aspirations. It’s their generosity that makes it possible and we are proud of not just what we do but who we serve.”

Basha commended Knopf on putting together an “amazing team,” adding that Raley’s has a professional management team with the touch of a family organization.

“Our hope as a family is to see the legacy, the opportunity for our team members to continue in the future long after we’re gone,” Basha said. “The same way that the company continued after the original generations have left. It’s not so much about us, it’s about the people that we work for and the communities that we serve.”