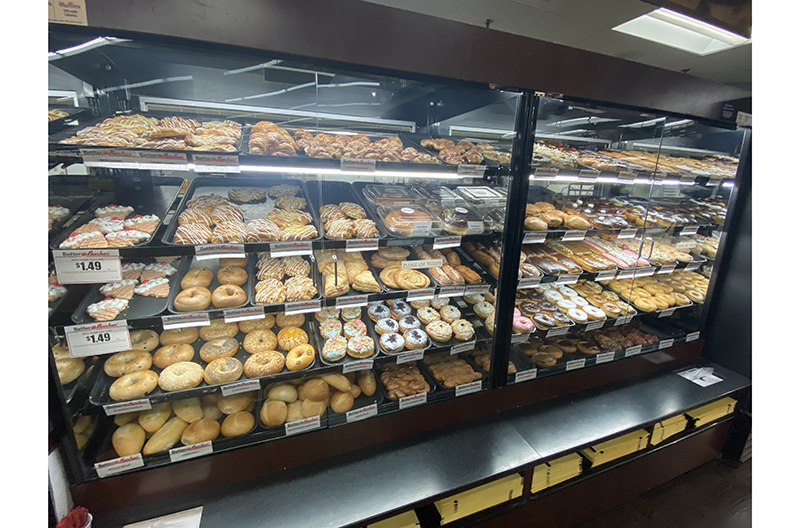 The Starbucks kiosk was the first stop, where they spoke with Lynn Engelke, director of Bashas’ Starbucks locations, which are in 32 stores.

The Starbucks kiosks employ about 300 people company-wide, said Engelke, adding that “for Bashas’ and Starbucks, I think it’s a great marriage, a great partnership.”

“We do have a lot of regulars that come in every morning, and then they stop back in, in the afternoon. It’s been a great addition to the stores,” Engelke said. “It definitely draws in a crowd and keeps them in here.”

Woodward added that there are Starbucks kiosks in three of Bashas’ Diné stores in the Navajo Nation.

“We’re the first grocer to open [Starbucks] in Native American Navajo stores,” he said. “We’re very proud and excited about that.”

Woodward said they also have opened a Starbucks in one of the company’s Food City stores.

As the walk-through continued, Greco – a native of Chandler – shared that he got his start with the company bagging groceries.

“My dad was a mailman for the local store director and said, ‘Son, you’re going to work and you start Saturday.’ I [did] and then never looked back,” he said.

“We do scratch donuts here, which is different from all the competitors,” she said. “We mix it, we proof it, we fry it here.”

She said Bashas’ is known for those donuts, adding they are free of preservatives. “It is a big chunk of our business, so we’re pretty proud of them,” Abella said. “We have a lot of varieties and we decorate here in the store.”

There are scratch bakers in every Bashas’ store, she said, noting that’s uncommon. Abella has been with Bashas’ since 2005 but has been in the bakery business since 1985.

She said Bashas’ bakers make all their cakes in-store, along with pastries, and “we are all about fresh.”

Abella said their self-service or grab-and-go cases are popular, especially since the advent of COVID-19.

She said they never shut their pastry cases down, as many other stores did. Making their donuts in-house was a plus, as they did not have to rely on suppliers.

On Fridays, the stores have a “buy a dozen donuts, get six free” offer. Abella said that keeps them busy.

“It draws them in, so we get a lot of traffic that comes through here,” she said.

“We’re proud of our bakers,” she said.

Bashas’ also sponsors a Donut Flavor Craze Contest for National Donut Day, which falls on the first Friday in June. The contest kicks off in April and winners are announced the week leading up to National Donut Day. Customers submit recipes and celebrity judges choose the winners in adult, youth and employee categories. Abella said the theme this year was Carnival.

On National Donut Day, Bashas’ donates 10 percent of its sales to The Salvation Army.

Entering the deli department, Jorge Alvarez, director of deli for Bashas’, talked about what’s special there. He cited oven-baked pizzas, the sandwich bar, fresh sushi, taco grill and hot case items, along with the cold service case that has fresh salads and Boar’s Head meats and cheeses.

The sushi chef prepares fresh sushi each day. Alvarez said the sushi is popular and is up “double digits” versus last year. 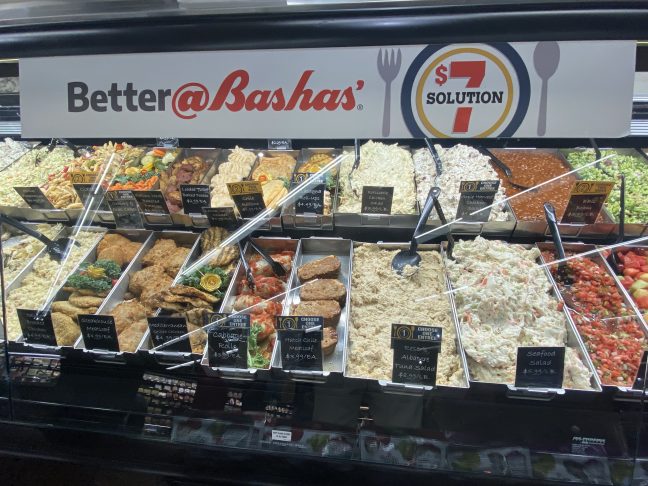 The sandwich bar features a menu board, but custom-made sandwiches are an option. Alvarez said pre-made sandwiches, made each morning, are available along with specialty sandwiches.

The wine department features a selection of upper, middle and lower tier wines. A selection of microbrews is located adjacent, in refrigerated cases, and includes Arizona beers.

Alvarez was quick to tout Bashas’ $7 Solution, which is a whole meal for $7. Customers may select one of 10 different entrée items and two of any sides in the case.

“You get a full restaurant quality meal,” he said. “And you know with today’s economy that’s really a bargain.”

They have a seasonal summer set, which runs from March to November, and then a winter set. Fresh seafood also is available.

Greco spoke to the differences between Bashas’ and its Food City brand. He said Bashas’ has an extended variety and features “hero items.” These are items made in-store, such as the fresh cut-fruit program.

The summer focus is on produce, which is “our prime time to shine,” he said. “We’re running our summer savings program, where we’re focused in on produce. We have that responsibility of driving traffic to our stores during the summertime.”

Greco said there is a higher level of focus on organic and on local in the Bashas’ brand.

“We pridefully are one of the only retailers here in Arizona that will put organic up on the front page ad,” he said, noting that produce is locally grown.

The layout of the product section is strategically planned out.

“Everything is allocated to present well and at the same time for the fastest turns,” Greco said. “We’re always having to put new product out in any given time…it all goes back to our lifestyle check – shelf life belongs to the customer, and we’re offering that through our merchandising.”

The store tour wrapped up in the floral department. Greco noted that when shoppers enter the store they “see the beautiful colors immediately” of the bouquets, roses and other flowers and house plants. Melissa Burrell, director of floral, mentioned the variety of offerings available for customers.

“We start our base levels right around $9.99 for a bouquet and then we’ll go on up to about $16.99 for a premium bouquet,” she said. “We’ve got what we call our growers bunch…and if there’s a particular flower that you like, you can mix and match the bunches at a great value. This program is in our Bashas brand and our Food City brand.”