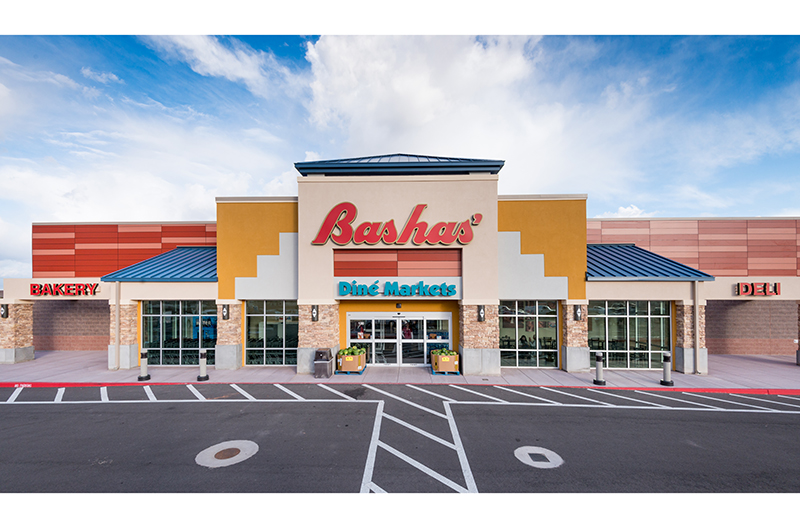 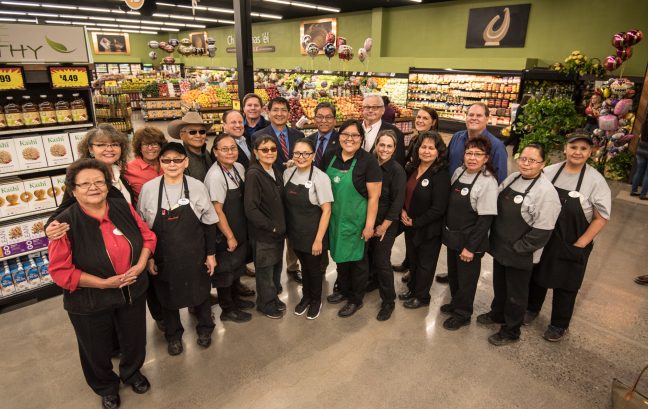 Eddie Basha Jr. traveled to Window Rock and met with the tribal leaders and told them he wanted to be their grocer.

“There were three things [my father] told me that he wanted to be remembered for when he passed away,” Trey Basha said. “One of those was bringing stores to the Navajo Nation. Because not only did we bring stores with fresh produce, fresh meat and a full contingent of groceries, but we also created jobs and provided livelihoods.”

He added that part of the lease terms was that Bashas’ had to agree to different levels of employment of tribe members. All but one employee in the Navajo Nation stores is Navajo, Trey Basha said, but that man’s wife is Navajo.

Johnny Basha said his first cousin was committed to the Navajo people.

“Eddie wanted to provide groceries to the Navajo Nation,” Johnny Basha said. “He always said that the Navajos had to drive a long way to get groceries. They didn’t have electricity. They didn’t have refrigerators. They had to use ice chests. They couldn’t eat perishables – fresh fruits and vegetables – every day. So it was Eddie’s thing to build grocery stores up there and provide good healthy food for the Navajo people.”

When opening a store on the Navajo Nation, the business committed to feed the people before they come and shop, Trey Basha said.

“That’s just part of the culture,” he said. “We would do this big luncheon prior to opening this store where we would feed all those who came out. The community comes out.”

He hearkened back to 50-60 years ago when the grocery store was the community hub, second only to church. “That’s the way it is on the Navajo Nation.”

He said leases are renewed every four years and Bashas’ has worked with a number of different tribal administrations. “It’s been an incredible relationship for us.”

Eddie Basha Jr. had great respect for the culture of the Navajo people and that has carried on. The Navajo Nation was “incredibly hit hard by the COVID virus,” said Trey Basha, adding that at one time the per capita deaths on the nation were greater than anywhere else in the U.S. “As a company, one of the things we did is put up the Plexiglass shields on the Navajo Nation first.” Bashas’ also rolled out all its sanitation efforts in its Diné Markets stores first.

The company also worked with the various tribal government entities to make sure it was complying and partnering with the Navajo Nation “to do all we could to protect our team members and our customers coming into the store,” Trey Basha said.

He noted that they have been remodeling the Diné stores and “they’re just beautiful,” featuring artwork that represents that specific community. Also, some of the stores feature Starbucks kiosks. They drove the Starbucks representative to Window Rock and spent some time convincing them of the viability of placing a kiosk there.

“It was the first Starbucks on any Native American reservation anywhere in the United States,” he said. “It’s doing fabulous. We’ve opened two others since then and we’re planning a fourth.”

Bashas’ Diné Markets is the second largest employer in the Navajo Nation, second only to the nation itself.

Trey Basha said he used to joke that “Eddie Basha was the most popular man on the Navajo Nation, second only to George Strait.”

Johnny Basha added that, in his younger days, when he would go to the stores with his late cousin it “was like being with Clint Eastwood.”

“Everybody wanted their picture taken, they wanted his autograph. It was a huge, huge deal to the Navajos, especially the elders,” he said.

It was the elders who had to drive 60 or 70 miles to get to Flagstaff or another larger city to buy fresh fruits, vegetables and meat.

“It’s Eddie that brought the stores to them, and they loved him for that,” Johnny Basha said.

He added that when Eddie Basha Jr. took him to the Navajo Nation years ago, he taught him to always conduct himself as a guest on their land. He also taught him that if there was a cultural type of issue to overcome, it was his issue – not theirs.

When Bashas’ first opened its store on the Navajo Nation, company leaders learned that the Navajos have a matriarchal society. While they previously had many men as managers, they discovered having Navajo women as managers was “key to the success of our stores,” Johnny Basha said.

Bashas’ also has opened stores on the Apache reservations after being invited to meet with the tribal council.

Trey Basha said he drove with his father to the White Mountain Apache Reservation. During that first meeting, an auditor walked in saying he had just been to the store, saying there had been “about a million dollars of shrink out the back door, there’s $250,000 in cash sitting in the safe… and there’s rotten meat on the shelves.”

He said the council erupted into speaking in the Apache language.

“Eddie’s there saying, ‘I’m here to be your grocer.’ So for the next hour, they grilled us about what we’re going to do and how we’re going to conduct ourselves,” Trey Basha said. “They would only give us a three-year lease because there was that little sense of mistrust.”

They operated on a three-year lease, which was renewed several times. Then they were out of lease, operating month to month for maybe 10 years. He added that Eddie Basha Jr. had a great relationship with the late Ronnie Lupe.

Lupe was “a powerhouse on the White Mountain Apache Reservation for many, many years,” Johnny Basha said. “And he trusted Eddie.”

His father also was contacted by the Tohono O’odham nation, asking for a meeting. They already had a building that they wanted Bashas’ to occupy.

“All of that was predicated upon our relationship with the Navajo Nation and that we had performed,” Trey Basha said.

In addition to the nine Navajo Nation stores, Bashas’ also has a store on the White Mountain Apache Reservation, as well as a store on each of the San Carlos Apache and Tohono O’odham reservations.