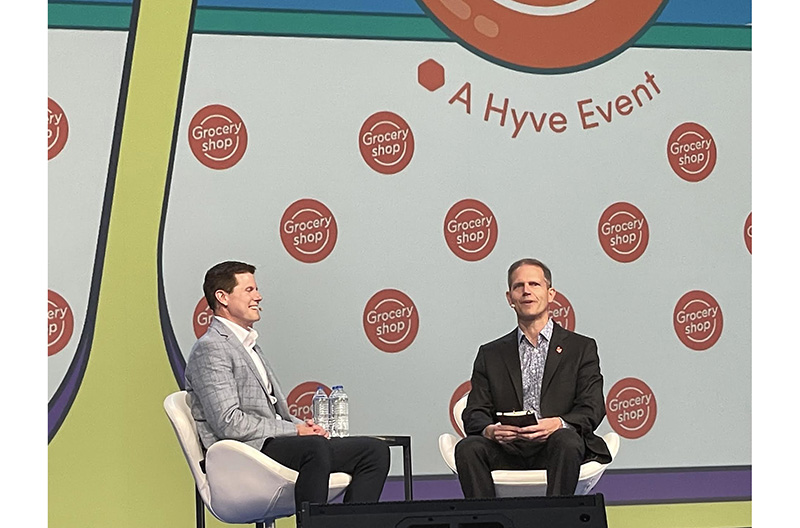 LAS VEGAS – Among the highlights of opening day at Groceryshop 2022 was a keynote conversation with Jason Buechel, the new CEO of Austin, Texas-based Whole Foods Market.

Making his first public appearance since taking the helm, Buechel was interviewed Monday by Joe Laszlo, VP of content for Groceryshop, on the main stage at Mandalay Bay Resort.

Groceryshop, which bills itself as the leading CPG and grocery event, has drawn some 4,000 attendees for four days of education and networking.

After praising John Mackey, the company’s co-founder and previous CEO who retired on Sept. 1, Buechel began by revisiting his roots in Wisconsin and a childhood connection with food.

“I’ve been gardening since I was 7. Both of my grandparents ran dairy farms. My dad was a cheese maker. I guess that makes me like a pretty stereotypical Wisconsiner,” he said with a laugh.

Buechel, one of some 200 industry leaders set to speak at Groceryshop, explained that he had worked in the retail space for 13 years before joining Whole Foods in 2013 as global VP and chief information officer. He was promoted in 2015 to EVP before being named chief operating officer in 2019.

In addition to being responsible for the operations of all Whole Food stores and facilities, he oversaw technology, supply chain and distribution and team member services.

When Buechel joined the company, he noticed that the leaders and the core values within the company “weren’t just words on a wall.”

“I’m just so honored to be able to be in the dream job that I’ve never imagined that I would be in but that is ultimately an amazing experience,” he said.

Asked how he plans to lead Whole Foods, Buechel pointed to the company’s “higher purpose and core values.”

In preparation for becoming CEO, a transition that was announced last October, Buechel went on a “listening tour” during which he met with stakeholders across the company.

Buechel added that he hopes to bring a more “store-centric” design to Whole Foods to help “unleash growth.” While the company has grown as a part of its parent company, Amazon, he hopes to spread Whole Food’s wings further.

When speaking about the brand’s discernibility, Buechel shared that his team found customers are interested in traceability and how Whole Foods’ products move through the supply chain. Store experiences also are changing.

“We’re really excited about bringing back the theater of retail,” he said. “It’s been a little difficult over the pandemic, but our customers do look for that amazing experience…not just where we were at before but ultimately where we can look to take those experiences as we go forward.”

Those new experiences could be products or offerings.

“Some of them are going to involve technology that simplifies,” Buechel said. “But as we continue to open new stores, I’m really excited about the high bar that we’re setting for the amazing customer experiences we bring.”

Buechel and Laszlo’s talk then turned to a Whole Foods store on the west side of Manhattan, New York, that has begun implementing those new experiences and theater of retail. They noted how butchers and other team members often can be seen throughout the store.

The conversation also covered other aspects of the store, including its integration with Amazon and a design that is “a reflection of the area it inhabits.”

Buechel concluded the event by sharing his gratitude to Mackey for the opportunity to lead Whole Foods and thanking customers who helped propel him into the position.

“I am truly humbled and honored for the fact that many folks are going to us as the No. 1 natural and organic product retailer…John is a legend and I’ve got big shoes to fill. I just hope I’m up to the challenge.”