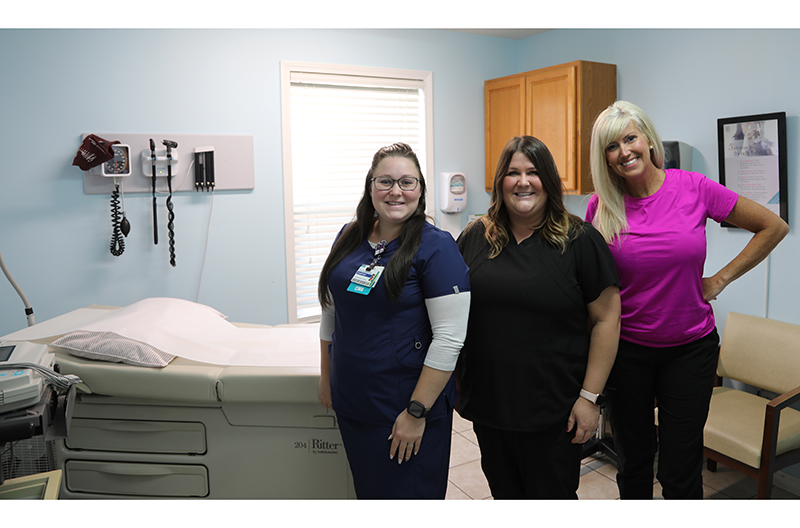 Laurel Grocery Co. takes the health of its employees seriously. So much so that after several years of concerning results from screenings through the local hospital’s community health program, Laurel Chairman and CEO Winston Griffin and President David Pearson decided to take action.

The result was Connected Care, an on-site health clinic for employees and their families, with healthcare providers employed by the local hospital.

The clinic is one of Laurel’s many attributes that helped the company earn recognition as The Shelby Report’s Wholesaler of the Year for its Midwest and Southeast regions in 2022. The company also is celebrating its 100th anniversary this year.

When the annual screenings were being conducted, hospital personnel would meet with Laurel officials to go over the aggregate results and “it was pretty bad,” Griffin said.

Around that time, Laurel employed about 270 people, but health coverage was extended to spouses, which brought the number of insured closer to 500.

Griffin said after additional attempts to improve the aggregate numbers did not help much, hospital personnel told him he had a “very unhealthy workforce.” They suggested having a doctor on site.

Griffin said he and Pearson decided to go further. “We said if we’re going to do this, let’s do it right. Let’s have a place where a doctor can come and actually see employees.”

They decided to build a clinic offering free healthcare. They wanted a location where employees and their families could have privacy and chose to construct a building near the warehouse. The company contracted with the hospital to staff and help design it.

The community health nurse the hospital had been sending to Laurel monthly – Angie Patton – was hired by the company as director of health and wellness to run the clinic.

Connected Care has been available to employees and their families for eight years and “has been a tremendous success,” Griffin said.

When building the clinic, Griffin said he asked for the top reasons people don’t want to go to the doctor. The list included long wait times with sick people, having the doctor spend just a couple of minutes with patients and difficulty getting appointments. The clinic was designed to remove those excuses.

“We put an incentive plan together with the clinic itself and said, ‘OK, we’re going to pay you to get a physical.’ So not only when you walk into that building is what you’re having done free, you’re also going to actually make money,” he said.

“Right there, we had a huge push to just get people to start going to the doctor,” said Griffin, noting the numbers showed that 15 percent of Laurel employees had never had a physical.

Starting from a disadvantage, Griffin said the company did everything it could to get employees to visit. The clinic is open three days a week with a nurse practitioner and a physician on staff.

Once people began getting physicals, they were able to address issues they often did not know they had.

“They knew something wasn’t quite right,” Griffin said. “All of a sudden, we started finding all of these issues. Our slogan over there is ‘Prevent the Event,’ with the event being a heart attack…or confirming that you’re a diabetic. Let’s address it before we get to that event.”

Patton said employees and their families began using the clinic for primary care. Within two years, it was able to decrease abnormal blood pressures from 80 percent to 43 percent, and abnormal blood sugar readings fell from 40 percent to 11 percent, through medication, diet and lifestyle changes.

Another thing the clinic can offer, since it is company funded, is having blood work and other labs as often as needed. Many times, insurance companies limit their numbers.

“We can do that as often as we want, whenever we feel it is beneficial for the patient. Again, that’s something the patient doesn’t pay for, Laurel Grocery is paying,” Patton said.

Griffin said he was straightforward with Laurel employees, telling them there were two reasons for the clinic. “One is to help Laurel Grocery’s health costs [the company is a self-funded employer], and two is to make you a more healthy person,” he said, adding that “those are both really important goals around here.”

Prior to the clinic, Laurel’s health insurance rates kept increasing each year. Those costs have not only leveled off, they’ve started dropping. “It’s all because we’re so focused on preventive medicine,” Griffin said.

The clinic dispenses prescriptions for medications to treat conditions such as high blood pressure, diabetes, high cholesterol, along with antibiotics. The medications are purchased wholesale by Laurel and employees pay that price.

The healthcare providers at the clinic are encouraged to spend as much time as necessary with each patient.

“Angie will block off an hour when someone comes in for a physical. It may not take that much time, but the doctor needs to know that there’s not a waiting room full of people to be seen. Angie doesn’t let that happen,” Griffin said.

“The waiting room is tiny, but it’s essentially not even used. We don’t want people to sit and wait.”

Connected Care has made a difference in the lives of Laurel employees and their families. Just through basic yearly physicals, a broad range of health issues have been discovered, including some that have been life-threatening. Patton said one that stood out was a 13-year-old boy who came into the clinic during its first year.

“He had been complaining of migraine headaches and had seen his pediatrician multiple times,” she said. “He came here and our doctor at the time ordered a CT scan and MRI and found that this boy had a brain tumor.”

He underwent chemo and radiation. Eight years later, “He’s cancer free and doing very well,” Patton said. “I don’t even want to think about what could have possibly happened to him had our clinic not been here.”

Patton gets feedback from employees often. “They are very appreciative, they’re very grateful, they’re very thankful for the clinic,” she said. “Because not only are we providing them a service, it’s just everything that makes up our clinic.

“They really feel that we genuinely care about them. We’re not there to harp on them or be mean…they know we’re not going to scold them, we’re going to help them.”

The overall health of Laurel’s employees and their families is important to Griffin and the clinic was designed with that in mind. “It’s been a great success,” he said.

Connected Care has been recognized by other organizations, including the CDC in Atlanta, as an example of a company “attacking the problem” of employee health. Griffin and Pearson have spoken to CDC officials about the clinic.

“I’m getting ready to go to a conference in Boston and speak on it in a couple of weeks, and I’ve been to a couple of others,” Griffin said.

He noted that Tom Frieden, who was director of the CDC at the time he gave his presentation, told him there were a lot of areas of the country that were equally unhealthy.

“They were trying to figure out how to replicate this model to other places,” Griffin said. “…But they have to understand there’s a time element and it’s an investment. It’s not overly expensive, but you have to encourage people to go and have preventative work done.”

The time spent between patient and doctor is crucial.

He added that, because the clinic employees – with the exception of Patton – are hospital staff, “Laurel Grocery’s not tied in at all – we’ve got HIPPA covered because it’s a separate building and our HR department doesn’t have anything on [employee] health. It’s all in the hospital system.”

The company pays a set fee to the hospital for its personnel, whether they see five patients or 15 in a day. The close relationship with the hospital has been key.

“I’m paying the hospital that same rate. That’s what makes it work. I know hospitals can’t do that but a company can,” Griffin said.

Griffin said the clinic will be one of his biggest legacies in the family-owned business. When his father was running the company it was much smaller, and he was able to deal with day-to-day issues.

As president, Pearson now has those duties, which leaves Griffin free to address other matters, such as the cost of health care. While he has no background in healthcare, he knew the issue had to be addressed.

“It was such a big expense to Laurel Grocery, and growing – it just felt uncontrollable until we decided to hit it as hard as we can,” he said.

Pearson said the clinic is a “huge passion” for Griffin and himself. He oversees the operations of the facility. “We’re both really, really proud of that clinic,” he said.

Sommer joined The Shelby Report in January 2022 after graduating from Brenau University in Gainesville, GA with a B.A. and M.A. in Communications and Media Studies. Sommer is excited to learn about the grocery industry and share her findings with The Shelby Report's readers!