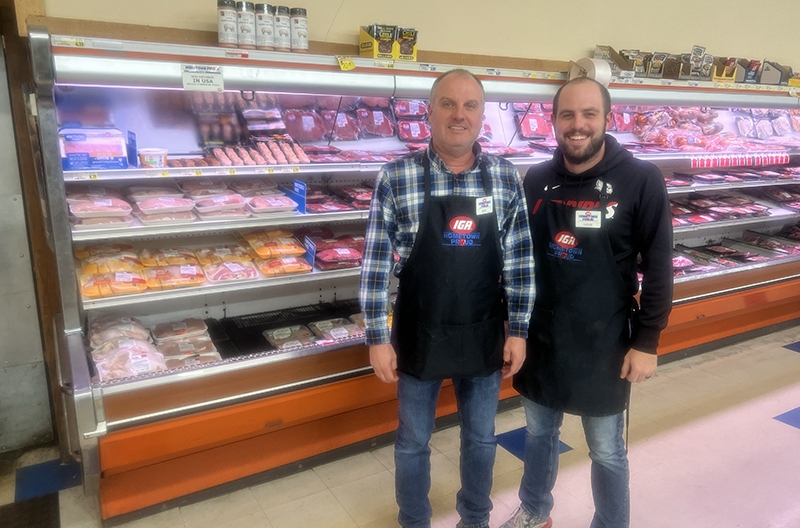 Michael Lambrecht has owned Jim’s IGA for just two years. But he has been a part of the Lacon, Illinois, community since the store’s inception.

Jim’s opened in 1976, Lambrecht’s father and the store’s namesake, Jim, came down from Chicago to manage what used to be a A&P grocery store.

“A&P decided to get out of the area and [he] purchased that and changed it to an IGA,” Lambracht said.

Lambrecht’s father died last year but had been retired from the store for more than 10 years, according to Lambrecht.

As a child, Lambrecht helped unload trucks and stock shelves. He officially started working in the store during high school. He returned after graduating college in 1991. Lambrecht’s oldest son, Lucas, has followed in his footsteps. After completing his degree, he spent three years working with Jewel-Osco.

“He worked for them and was in their management training program before coming back. He came back Jan. 21, 2020,” Lambrecht said.

Lambrecht hopes his son succeeds him in taking ownership of the store whenever the time comes.

The Lambrecht family is the only grocer left in Lacon, a town of about 1,800.

“There used to be what I think was a Jack and Jill and maybe a Red Fox years ago,” he said. “We’ve outlasted everybody. Just the Dollar General [is] in town, like everywhere else.”

Towns near Lacon have smaller populations, between 300 and 500 residents. All of them have a value store. but the closest dedicated grocery store is about 20 minutes from the cluster of small towns, a Kroger in Chillicothe, Illinois.

“There really isn’t too much around us,” Lambrecht said.

As he is based in such a small town, Lambrecht works closely within the community. He frequently donates to the local high school. Whether it be advertising space, financial or food donations, he is always willing to help. In fact, he’s willing to help out anybody who asks.

“[The school] usually asks for fundraisers – advertising space and food,” he said. “I remember one time the motorcycle club was doing a fundraiser and we donated all the hamburger buns. Throughout time, we help people by donating pork chops and [other items], whatever they ask for.”

Much like many other retailers, Jim’s IGA has had to deal with rising operation costs and employment and supply shortages. But Lambrecht feels he has fared “better than others.”

For example, aside from the early onset of the COVID-19 pandemic, he has rarely found himself with bare shelves. He has felt the pains of the shortage of baby formula.

“We just had stocked infant formula a little bit ago but that crossed right away. It was out again,” he said. “Cat food is starting to get a bit low. There doesn’t seem to be any rhyme or reason. We just do our best to track it all down wherever we can.

“It seemed worse at first when COVID started. Everybody was wiping out paper products and toilet paper. I don’t think it looks as bad. We get three trucks a week, but every time you see that out of stock, it’s almost as many pages as the stuff that came in.”

Lambrecht is currently fully staffed and considers himself “much better off than he was 10 years ago.”