Home » Are You Prepared? 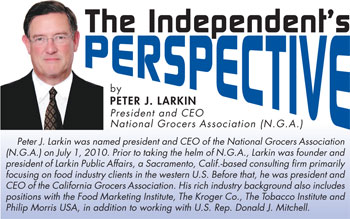 The month of June marks the beginning of the Atlantic hurricane season, and forecasters are predicting a busy season, but hurricanes are only one of many events that can impact retail and wholesale operations. As we’ve seen earlier this year disaster can strike at any given moment. The devastating earthquake and tsunami in Japan literally wiped entire towns off their foundations. Deadly tornados that struck cities and towns across the country this spring collapsed retail establishments and leveled entire communities in a matter of seconds. Don’t think it can happen to you? Think again.

Supermarkets are on the front lines of emergency response both in preparation for an impending disaster such as a hurricane, flood, blizzard or ice storm and as one of the primary operations that must be up and running for a community to be able to recover after a disaster strikes. Many local and state governments have partnered with local retailers, wholesalers and even state trade associations to coordinate response efforts after a disaster in order to quickly get basic necessities such as food and water back into local communities.

The relationships are important for a number of reasons:

<li>First, the quicker the community recovers the better for your businesses. If there is a mandatory evacuation, supermarket operators may be given special access to affected areas ahead of the general population.</li>

<li>Third, during declared emergencies state and federal governments have additional powers, including the power to commandeer inbound shipments of supplies or fuel for generators. By getting the supply lines opened quickly—with distribution centers able to receive and ship ­merchandise and retail locations able to receive and sell products—governments are less likely to take such action.</li>

<li>Finally, helping the communities that we are part of is what the supermarket industry is all about. Whether it’s donating supplies or allowing the use of a store location as a central distribution point for relief goods, our industry will do what it takes to help our local communities recover quickly.</li>

It’s also essential that all companies, large and small, have a plan. Do you have a way to contact your employees if they become scattered and phone lines become jammed? How will you transmit orders to your wholesaler if Internet traffic becomes unreliable? Can you access your bank and your funds to pay employees and vendors? These are all important questions that should be addressed and communicated to your management team, vendors and employees now, before it’s too late.

The Boy Scout motto says it best: “Be prepared.” So as the next Atlantic hurricane ­season begins, use this opportunity to review and update your disaster plans. We can’t control when or if the next disaster will strike, but by being prepared we can ensure that we’ll be ready to respond effectively and help the communities that we serve recover.