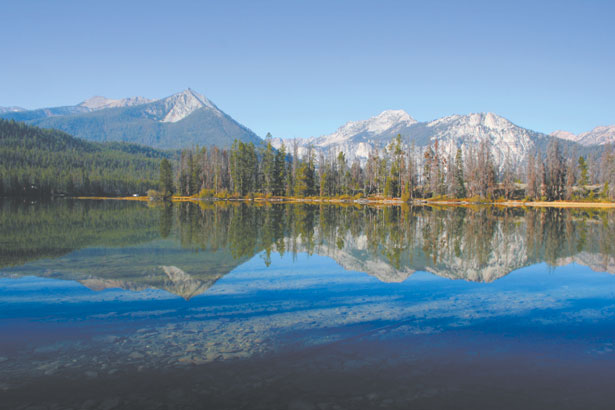 Too many children still go to bed hungry in Idaho: That’s the conclusion of the latest study tracking food insecurity in the United States.

A house is food insecure if there isn’t access, at all times, to enough food for an active, healthy life for all household members.

Idaho Food Bank President Karen Vauk told KBOI2 out of Boise that the statistics are much higher than what’s on the report because even though it was only recently released, the data was collected two years ago.

“We’ve seen the number of families who are needing food and assistance go up significantly since 2009, so we believe those numbers for children are actually higher than we’re seeing,” Vauk said to the news station.

Many empty shelves at the food bank back up the claims of a food shortage. Every month, the food bank tries to distribute one million pounds of food. but Vauk says that goal is now impossible.

“We don’t have much food right now, and even at a million pounds a month, it’s not enough to meet the needs of people facing hunger,” Vauk said.

A 9.4 unemployment rate in Idaho is adding to the problem.

“I can tell you that just from a layman’s perspective, (the economy in Idaho) is still struggling mightily,” said Michael Read, VP of public and legal affairs for Boise-based WinCo Foods, to The Shelby Report.

“We’re still seeing the impact of the recessionary economy. There’s a fairly high level of unemployment and a high number of people on food stamps.”

Increases in Supplemental Nutrition Assistance Program (SNAP)/food stamps caseloads between May 2010 and May 2011 occurred in all parts of the country. Among the 10 states that registered the largest over-the-year percentage caseload increases was Idaho with a 16.1 percent increase, according to the Food Research and Action Center.

Because the SNAP benefits are distributed at the beginning of each month in Idaho, the increase in the number of those getting and using the benefits has significantly increased the strain on the grocery industry that already existed.

“Over the last couple of years, the thing that has been fairly noticeable in the grocery industry is that the percentage of individuals on foods stamps has significantly increased,” Read said. “The way the industry tries to serve that percentage of its customer base has become an increasing challenge, particularly in a state like Idaho that distributes all of those benefits on one day only.”

According to Read, entities including WinCo and the Northwest Grocers Association are working with the Idaho government to spread the SNAP benefits out over a greater number of days so that the grocery industry as a whole can better serve all of its customers, “but particularly those receiving SNAP benefits,” said Read.

“Planning for a top-heavy sales month is tough,” he said. “You’ve got to increase your in-store inventory, you’ve got to schedule your labor appropriately, and that does present challenges when you’ve got such a huge percentage of your business being done in a relatively few days at the beginning of the month.

“We’ve been working with the state legislature as an industry over the past few years and we hope that we’ve got a resolution worked out with the State Department of Health and Welfare as well as the legislature. We hope to move that agenda through at the early part of next year’s session.”

When asked about the likelihood that the resolution would pass, Read said that everyone involved was “optimistic.”

A small population has fairly small-scale needs; it’s just a matter of supply and demand.

Idaho is ranked 39th in the nation in population, with a little more than 1.5 million people, most of whom live in the state’s limited urban areas.

“We don’t have many urban markets at all in Idaho,” Read said. “I think most of the communities are served by independent grocers and my sense is they’re reasonably well served in that fashion.

“The larger communities are very competitive with the number of chains as well as independent stores.”

But growth in the grocery industry is slow going, despite Idaho ranking fourth in percentage of population growth in the nation from 2000-2010 (21.1 percent). The exceptions come few and far between.

Fred Meyer, a division of The Kroger Co., is planning its seventh Treasure Valley store in the new Eagle Island Marketplace planned for southwest Eagle. Construction is set to begin in the fall, and the store will be approximately 175,000 s.f.

According to a July 27 article in the Idaho Press-Tribune, the new Fred Meyer will fill a void since there’s no real retail grocery shopping in the area.

Also according to the Idaho Press-Tribune, an Asian Food Mart opened in April in Caldwell.

“There’s not another Asian food store close to Caldwell; it’s the only one in the Caldwell-Nampa area,” owner Paul Pegg told the paper. “This is experimental. We’re hoping that there’s a good market for it. It’s good food that everyone would like.”

Pegg told the Press-Tribune that he hopes to have some household and kitchen items popularly used in Asian cooking, such as rice cookers, in the near future.

In March, WinCo Foods, which is headquartered in Boise and has 10 stores in Idaho, unveiled a plan to help the economy in its home state, albeit marginally.

The employee-owned chain, known as “the supermarket low-price leader,” revealed in March that it would move about 60 jobs to Boise from Portland, Ore., over the next two years. The positions are in the buying, pricing, print shop and marketing divisions.

“We’re trying to centralize all administrative functions of the company,” Read told The Shelby Report. “We were in a split office setting for many years with our general offices in Boise. Management decided it would be more effective to have everyone (in Boise).”

WinCo opened five stores in the last year, three on Nov. 7, 2010, alone. Two of the stores are located in Washington, and one is in California. The stores range in size from more than 96,000 s.f. to more than 119,000 s.f.. The stores initially employ 600-plus individuals collectively, most of whom have been hired from each local market area.

As far as Idaho is concerned, however, no new stores have shown up nor are any planned.

“We haven’t had much growth (in Idaho), but we are maintaining and increasing same-store sales in the state,” Read said. “We don’t plan to, at least in the next year or two, add any new stores.

“We’ve got a fairly large and loyal customer base in Idaho, though, and I think as long as we continue to stick to our business mode, which is to be the area’s supermarket low-price leader everywhere we operate, we’ll maintain that base and continue to attract new business when they see the value we bring.”

Walmart, which operates 19 Supercenters in the state of Idaho, opened a new store in Hayden in September 2010 that added 350 new jobs in the area.

The 206,000-s.f Supercenter, which is open around the clock, offers a full line of groceries plus a bakery, a deli serving fresh food and meal solutions, meat and dairy products, fresh produce, beer and wine. In addition to apparel and accessories, a lawn and garden center, health and beauty aids, and an expanded electronics department, convenience services include a vision center, pharmacy and digital photo processing center. Leased areas and services include a Cost Cutters Hair Salon, a Subway Restaurant and Potlatch No. 1 Federal Credit Union.

A month before that, a new store opened in Post Falls, a 154,000-s.f. Supercenter that also is open around the clock.