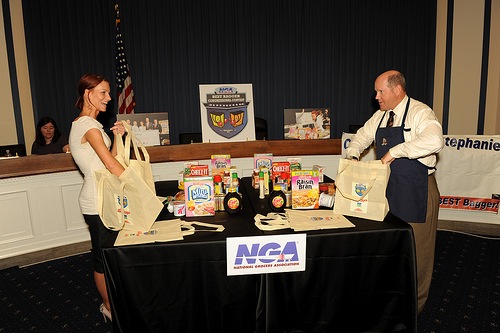 The 2012 national champion, Stephanie Teteak from Larry’s Piggly Wiggly/Kaukauna, Wis., who won the competition at this year’s N.G.A. Show competed against her member of Congress, Congressman Reid Ribble (Wis.-8). Teteak’s bagging strategy proved to be victorious once again with a 36.81 second win.

“N.G.A. is proud to honor the industry’s hard workers with such a fun event, which is made possible by our generous sponsors: Kellogg’s, Bunzl and Pan-Oston,” said Peter J. Larkin, N.G.A. president and CEO. “I’d also like to give a special thanks to Congressman Reid Ribble for his stellar good sportsmanship against an expert bagger like Ms. Teteak, and Tom Verhagen, president and CEO of Larry’s Piggly Wiggly for churning out such hard workers. Our first National Congressional Best Bagger Competition was a great success and N.G.A. looks forward to hosting many more in the upcoming years. Congressmen, start practicing.”

In the featured photo at top: Stephanie Teteak goes bag to bag with Congressman Reid Ribble.