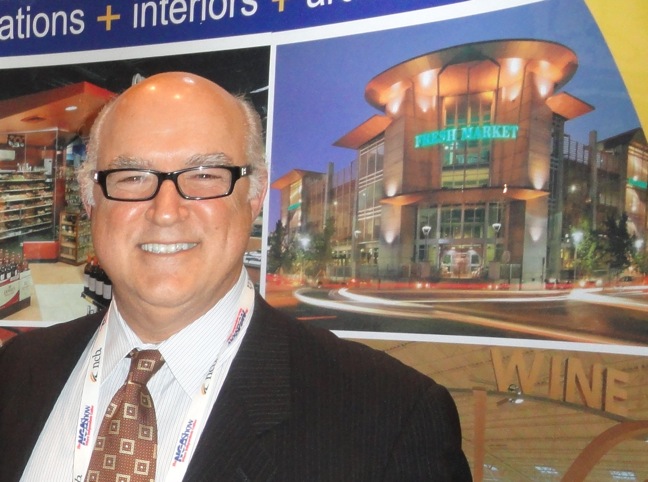 While the 2013 NGA Show was filled with retailers and wholesalers, many of those companies have worked with api(+) (Architecture Plus International) to improve their store designs. In an interview with Bob Reeves of The Shelby Report, Juan Romero, CEO and founder of api(+), discussed his company and the important work the firm does for retailers and wholesalers.

Romero, who came to the U.S. in 1961 as a Cuban refugee, grew up in Miami, Fla., and began working with Food Fair, a supermarket chain. Working his way up from produce to cashier, Romero said that while he “loved the business,” he left to pursue design and become an architect.

The food industry, however, wouldn’t be ignored.

During his work for a retail design firm based in Cincinnati, he ran operations in Florida. One day, he said, they asked him to start calling supermarkets to see if they could get into supermarket design.

“My very first call was to a company called Kash n’ Karry in Tampa, Fla., and they at that time were looking for a design firm to help them design a new prototype,” Romero explained. “From that day, we hit a home run on that first design we ever designed.”

He moved into the food industry design business, and the rest, he said, is history.

“From there, we have worked, frankly, with just about everybody in the nation right now as far as the supermarket industry, whether it’s Walmart all the way down to small independents.”

api(+) is a multi-disciplinary firm, allowing it to “offer our clients total solutions, not just something that has to do with décor…not just something that has to do with strategy of architecture, but the entire thing,” Romero said. While Romero began the company as an international business and continues to work with large corporations across the globe, he said the NGA Show is an opportunity to work with independent grocers “who seem to have more passion at a closer level to their heart when it comes to stores.”

Romero has worked with several different retailers, including The Fresh Market, Delhaize, Schnucks in St. Louis and Tesco in the U.K., to name a few. Not all clients come easy, though, as Romero spoke of how api(+) gained Publix’s business: “For the longest of time, since we were working with a competitor in their marketplace, they wouldn’t give us any work, but we finally got them to…they’ve always recognized us as doing very creative work, it’s just it was a competitive issue that was in the middle of it.”

In addition to the U.S. and U.K., api(+) also has done work in Hong Kong and Canada.

Whatever format a store has is ripe for the picking at api(+). Romero’s first venture, Kash n’ Karry, has a warehouse format, which may not leave too much room for creativity. However, “there’s a discipline to good design (and), frankly, it doesn’t matter what your budget is. Good design is good design, and it solves issues and creates a momentum and marketing approach,” Romero said.

Silbermann: Produce Takes Center Stage And The Center Of The Plate
Siemienas: Strong Wholesale Business Will Lead Supervalu Into Future