Home » Silbermann: Produce Takes Center Stage And The Center Of The Plate 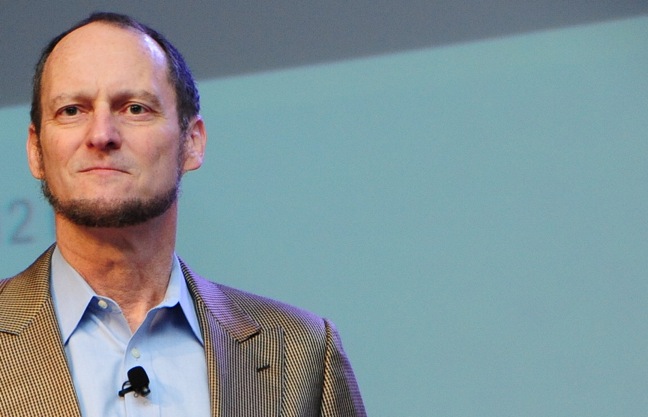 There is no question that produce is in the spotlight. It is driving the greatest traffic flow into supermarkets, said Bryan Silbermann, president and CEO of the Produce Marketing Association (PMA). He shared several trends in produce on Feb. 11 with attendees at the National Grocers Association (NGA) Show in Las Vegas.

And produce has found a home at the center of the plate. Silbermann said the key message for retailers is to watch the competition in the restaurant space. Many trends begin in foodservice and migrate to retail.

“Frankly, what Americans are eating gets influenced more by chefs and restaurants than it does by what you put on your shelves in supermarkets,” he said.

Silbermann said that he was at the National Press Club with Dawn Sweeney, CEO of the National Restaurant Association (NRA) about 18 months ago. The NRA launched its Kids LiveWell initiative in July 2011. To join Kids LiveWell, restaurants must offer more healthful choices, like fruits and vegetables, based on recommendations by leading health organizations.

“In case you haven’t noticed this, the impact of that program on chain restaurant menu offers has been tremendous, and this is the kind of food for thought that NRA is pushing,” Silbermann said. “Part of this is response to public opinion. Part of it is response to regulatory pressure, but it certainly is offering greater options to kids in restaurants.”

He talked about ethnic changes in the population and the variety of flavors from cuisines around the world that are becoming more popular. Again, the competition—restaurants—is leading the trend.

“From Italy, Spain and Greece all the way to North Africa, Mexico and Southeast Asia, this is what the culinary professionals call the World Flavor Trail, and it is driving healthier menu research and development throughout the chain restaurants,” Silbermann said. “I spend a lot of my time talking to people like the Culinary Institute of America and others, and it’s amazing to see how produce is playing a larger and larger role in cutting sodium, bringing new flavors to food. Folks, you’re going to see this if you’re not already seeing it on the Food Network or other TV. This is really driving things.”

Silbermann asked how many attendees had read the 1982 book “Megatrends” by futurist John Naisbitt. He predicted that as society became more high tech, consumers would move toward things that are high touch.

“You see this absolutely everywhere,” Silbermann said. “That’s what produce does in the store. It’s the farm stand feel. It’s back to nature. This is part of the high tech, high touch trend.”

Local produce is beginning to edge out organics in importance to shoppers. He said people are looking for connections and stories, and technology can play a critical role in putting the story of a farmer out there for consumers.

While there are all kinds of definitions of what a “locavore” is, the trend is influencing not only what consumers want, but also even state and local regulations. That is, until somebody discovers “it’s very difficult to get tomatoes in winter when you’re in New Hampshire,” Silbermann said.

What he sees happening in the next several years is a movement toward locale, local with an “e.” Take, for instance, Washington apples. Consumers will take a more balanced approach and understand that it’s the locale of the produce as much as it is local.

“Yes local is important in terms of supporting the community, in terms of sustainability, cutting down on carbon emissions because you have less transportation and so forth, but reasonably if you want to have food 52 weeks out of the year…if you want to eat bananas, you can’t get local bananas in the United States because they’re not grown in this country,” Silbermann said.

Produce can be a true convenience food. He said retailers tend to think of cut fruit as “just value added, as packaged products.” But it is great for people with busy lifestyles.

Convenience also comes from how produce is merchandised. He would like to see retailers look at produce from the consumer’s point of view to judge how easy it is to find everything in one place. They also should see items that are grouped together. For instance, avocados, tomatoes and garlic placed together might get a shopper thinking about making guacamole.

“You see this from the salad manufacturers in a lot of the new varieties of salad mixes with new dressings and so forth, Silbermann said. “You wouldn’t otherwise try it, so it’s a great way to introduce people to new products. It obviously saves time. There’s flavors added.

“I want you to pay attention to this. I think you’re going to see an explosion in the next several years in terms of flavors that are being added, especially to cut vegetables for cooking,” he said, “little packets, sachets and so forth put into the bag or the container with ready-to-use veggies.”

The one thing Silbermann said the produce industry has done a particularly poor job of is giving people sizes that are convenient. Varieties of fruit that are too big, or huge ears of corn people really don’t want are examples, he said.

Food safety is paramount, of course, particularly in produce. Growers, processors and retailers know that. Silbermann spoke about combating what he called “misinformation put out by a group called the Environmental Working Group about the so-called ‘dirty dozen’” (items the group claims expose consumers to pesticides) and he offered a site hosted by the Alliance for Food and Farming (www.safefruitsandveggies.com) that is a resource for science-based information about pesticide residues. Funding for the website comes from the agricultural community, from growers and associations, not from biotech or chemical companies.

More NGA Show photos can be found here. Check back for updates and additional photos from the show throughout the week.