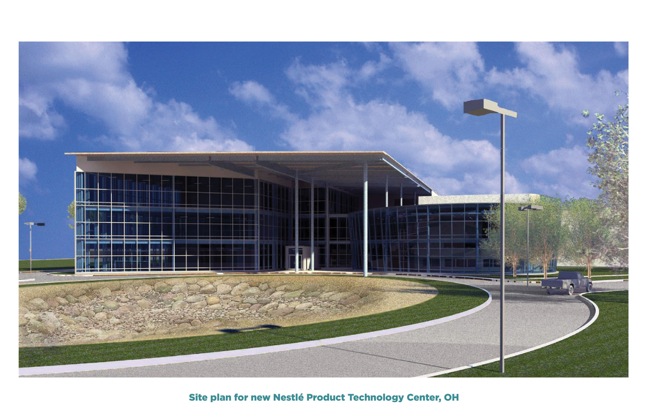 Nestle S.A. will invest $53 million to establish a new building that will expand the existing R&D facility in Solon, Ohio. The new center will be designated as a global Product Technology Center (PTC), dedicated to frozen and chilled foods research, and will serve Nestle’s businesses worldwide.

The new building will be located on 18 acres in a park-like setting off of Solon’s Cannon Road. The glass-faced facility will house offices and labs for approximately 100 scientific, professional and technical staff. The 144,000-s.f. building also will include a pilot plant where new recipes and the latest technologies will be tested and evaluated. Construction is expected to begin this summer and Nestle expects the new facility to be operational in late 2014. The decision to expand the research and development capabilities in Solon reflects the growth in size and complexity of Nestle’s frozen and chilled food businesses, the company says.

“We are pleased that the R&D effort first established in Solon in 2001 to serve our regional needs has matured into a global Product Technology Center,” said Johannes Baensch, Nestle’s global head of research and development. “We currently operate 11 Product Technology Centers around the world. PTC Solon will become the 12th of these important centers of excellence for Nestle. Here we will establish a critical mass of technology expertise and product knowledge for our global Nestle frozen and chilled foods business.”

Sean Westcott will serve as director of the new PTC in Solon. Westcott, a veteran Nestle employee, is an expert in leading product innovation, operations and quality control teams, the company says. He replaces former head Roberto Reniero who, with his team, gained rezoning approval from the Solon community in 2011 and designed the facility to comply with Leadership in Energy and Environmental Design (LEED) standards. In March, Reniero completed his assignment in the U.S. and was named head of PTC Lisieux in France, the Nestle center of excellence for chilled dairy products and healthy drinks.

“We are committed to what we do at PTC Solon because this is the place where we combine cutting-edge innovation with deep awareness of consumer needs and preferences,” Westcott said. “Our chefs, food scientists, nutritionists and operations experts work side-by-side with the various Nestle businesses we support to create foods that are more delicious, wholesome and satisfying.

“We’re extremely grateful for the support we’ve received from Mayor Susan Drucker and the City of Solon, from Gov. Kasich and JobsOhio, and particularly from the community itself, which demonstrated its support with an 85 percent approval when we requested rezoning,” Westcott added.

The PTC will join other Nestle facilities in Solon, including Nestle Prepared Foods Co., an employer in the city since it was first established there in 1968. Led today by President and CEO Frank Higgins, the business employs more than 1,900 in its offices and production facility. In April 2012, the company moved its Hot Pockets and Lean Pockets brands from Denver to Solon. The company operates 11 manufacturing facilities in the U.S. and employs more than 8,800 people.