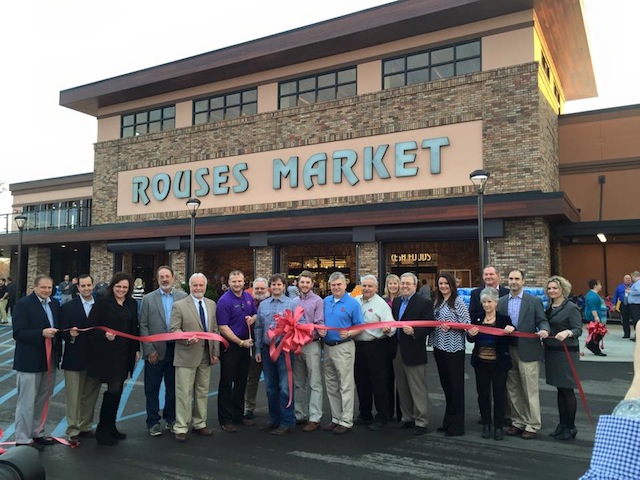 As The Advocate reports, the Thibodaux-based grocer had a location at 630 S. Range Avenue in the late 1990s in a building once home to a National Superstore. At that time, Rouses had eight stores in the Houma-Thibodaux area. Today, the chain has 45 locations stretching from Lafayette to Gulf Shores, Alabama.

“When we were here before, we were a little bit ahead of our time,” Donny Rouse, managing partner, tells the newspaper. “We weren’t quite ready to make a move that far away from our home office. It was a far stretch for us. Plus, we were in a store that was older and smaller than our competition.”

Now, instead of being in an older, smaller space, the nearly 50,000-s.f. store is one of the main attractions in Juban Crossing, the long-awaited regional shopping center that features retailers such as Belk, Academy Sports, Old Navy and Bed, Bath & Beyond.

The layout of the Denham Springs store is unique, Rouse says, with the produce section in the middle of the store next to a section that merchandises fresh, pre-chopped vegetables and fruits. The fresh seafood department is one of the first areas shoppers see.

“We wanted something more exciting and fun,” he says. “This is not a traditional box grocery store. We figure people will spend a lot of time in here.”

Over the past few years, Rouses has positioned itself as a more upscale chain, with a strong focus on Louisiana and Gulf Coast products. Those products range from packaged items such as Abita beer and Zapp’s Potato Chips to king cakes and jambalaya prepared in-store and fresh meat and produce supplied by local farmers.

“Nobody has the mix that we offer to our customers,” Rouse tells the paper. “We don’t put all this stuff in the store to make a big show for the grand opening. We put all this in the store, and we make it work.”

Rouses’ return to Denham Springs comes after the chain made a splash in Lafayette and New Orleans. Rouse says the company had wanted to get back into the Baton Rouge market for years, but it was easier to go into the other cities first.

The chain is using the same playbook to take on the Baton Rouge market as it did in Lafayette.

First, it opened a store in an outlying community. Rouses opened a Youngsville store in 2009, then its first Lafayette location opened in 2011. After the Juban Crossing opening, Rouses plans to build a 55,545-s.f. store on Airline Highway in Baton Rouge in the Long Farm Village development.

The timetable for the Long Farm Village opening hasn’t been set, Rouse says.

Additionally, plans are under way for a third Rouses in metro Baton Rouge. The location hasn’t been finalized, but Rouse reveals he’s looking at spots in Zachary, Gonzales and the heart of the city.

“There are plenty of opportunities here in Baton Rouge,” he says.