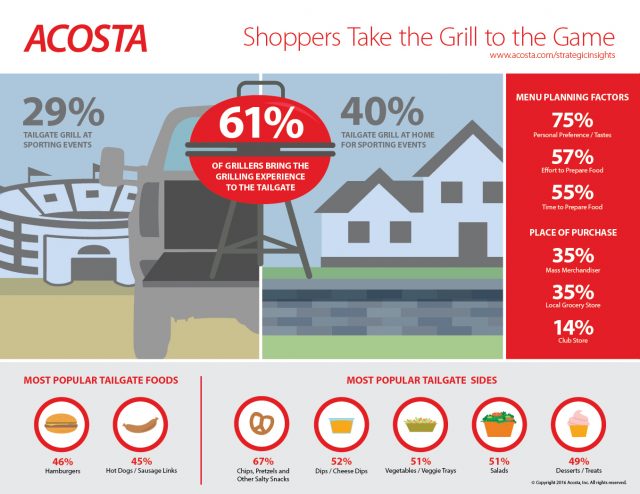 In honor of National Grilling Month in July, Acosta, the Jacksonville, Florida-based full-service sales and marketing agency in the consumer packaged goods (CPG) industry—released new research about the grilling habits and preferences of U.S. shoppers.

Though National Grilling Month takes place during the summer, Acosta’s research indicated that grilling goes far beyond traditional summer barbecues, with 61 percent of respondents saying they bring the grilling experience to the tailgate—one of the ways this method of cooking has gained year-round popularity.

“Our research shows shoppers choose to grill for two primary reasons: it provides a better flavor than other cooking methods and also gives them a chance to enjoy the outdoors,” said Josh Pelham, director of insights and strategy at Acosta. “This outdoor enjoyment factor, coupled with warmer weather, are likely some of the reasons why we also found almost eight in 10 grillers cook outside for key summer holidays. However, it’s the flavor factor that shows why many people are opting to grill throughout the year, even when the weather might not be as ideal.”

Summer is a popular time for grilling, but it doesn’t end there.

Tailgate grillers get warmed up for the big game by menu planning.

Sports fans have a variety of menu options.

Forty-six percent of grillers who tailgate grill hamburgers, while 45 percent grill hot dogs/sausage links. To accompany these grilled meats, the most popular side dishes are:

“Tailgate grilling–either at the stadium or at home–provides a unique cooking experience, and also menu versatility,” Pelham said. “Retailers and brands should keep these occasions and foods in mind when developing seasonal displays and creating meal solutions for shoppers.”

Acosta’s 2016 grilling research was completed via an online survey of the company’s custom shopper community panel.