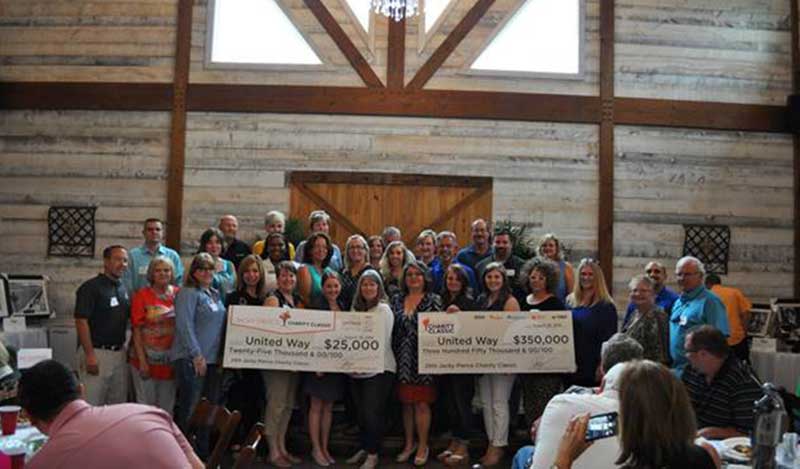 The United Family has presented donations totaling $375,000 to 25 United Way affiliates. These proceeds from the 25th annual Jacky Pierce Charity Classic golf tournament were presented to United Way organizations in West Texas, Dallas-Fort Worth and eastern New Mexico at the company’s tournament charity dinner at The Barn at Eberley Brooks in Lubbock, Texas, on Aug. 28.

This year’s tournament gift of $350,000, along with a special anniversary gift of an additional $25,000, brings the tournament’s total funds raised to more than $3 million since its inception in 1991. This year’s proceeds were distributed to 25 United Way organizations in the communities The United Family serves.

“We are proud to host The Jacky Pierce Charity Classic for the past 25 years and strive to continue impacting the communities we serve,” said Robert Taylor, president of The United Family. “The United Way shares our vision in making all our communities a better place to live, and we are proud to support their organizations throughout Texas and New Mexico.”

The tournament was named in honor of United Supermarkets’ longtime produce director, who guided the annual golf tournament from its infancy until losing a lengthy battle with cancer in August 2002. The tournament was renamed to honor Jacky Pierce’s memory in 2003, and the 25th annual edition was played Aug. 28-29 at Lubbock Country Club and Texas Tech Rawls Course.

“Jacky Pierce touched our hearts in many ways, and this golf tournament allows our team members to honor the great man he was and continue his legacy by supporting an incredible cause,” added Taylor.