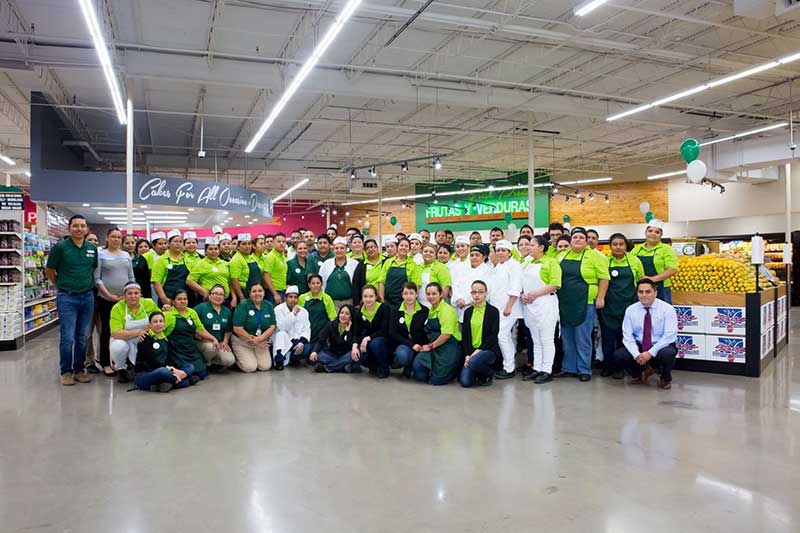 The population of Dallas-Fort Worth hit 7.3 million in mid-January. That is one million more people than were counted in the 2010 U.S. Census.

Immigrants legal and otherwise stayed home on Feb. 16 to illustrate their impact on the U.S. economy. In the Dallas-Fort Worth metro area, the “Day Without Immigrants” led to several businesses being closed, including some grocery stores. Among them were all Super Mercado Monterrey and El Rancho Supermarket locations, as well as El Mercadito Super Market in Arlington, NBC DFW reports.

The event was designed to protest President Donald Trump’s immigration policies, which call for a wall to be built on the U.S. and Mexico border and increased deportation of immigrants living in the U.S. illegally.

Dallas is a so-called “minority-majority” city, where there are more Hispanic residents than people of other ethnicities. City-Data.com puts the percentage of Hispanics at about 40 percent in Dallas proper, the Dallas Observer reports. Fort Worth is nearing the distinction, according to City-Data.com, with approximately 40 percent of the population white and more than 35 percent Hispanic.

Established players are expanding and new markets have opened hoping to appeal to the Hispanic shopper. In North Texas, that includes the aforementioned companies, as well as La Michoacana, Fiesta Mart and El Rio Grande Latin Market.

Houston-based Fiesta Mart continues to make inroads in Dallas-Fort Worth. Last July, it acquired all nine of the remaining Minyard Food Stores and two Sun Fresh Markets affiliated with Minyard in the metroplex from RLS Supermarkets. Three opened as Fiesta Marts in October: two in Dallas on Lake June Road and MLK Boulevard, and one in Irving on West Shady Grove. In December, former Minyard stores in Balch Springs and Waxahachie reopened as Fiesta Marts.

All of the remaining former Minyard and Sun Fresh stores now have opened. Fiesta Mart spokesman Sean Deitrick told The Shelby Report that the last of them opened Jan. 11. It was the Meadowbrook Drive store in Fort Worth.

The company also began remodeling existing Fiesta Mart stores after the Minyard acquisition and celebrated the grand reopenings of two stores in Arlington and Fort Worth in October.

“These grand reopenings…are another way to solidify our commitment to serve our local communities through excellent customer service, great values and a wide variety of international and specialty food options,” CEO Michael Byars said. “We’ve worked strategically to prepare these stores for this exciting time in Fiesta Mart’s history, and we can’t wait to provide a new, improved shopping experience within these stores.”

El Rio Grande Latin Market’s newest store offers healthy alternatives such as fresh fruits and juices in its Palapa department, traditional carnitas and spices as well as a full complement of traditional Latino-inspired dishes in its cocina.

Former Tom Thumb in Grapevine will again be a Tom Thumb

Tom Thumb, an Albertsons/Safeway banner, plans to open in a location it once owned in Grapevine. Safeway sold the Tom Thumb store to settle Federal Trade Commission anti-competitive concerns when it merged with Albertsons. Minyard Food Stores purchased the Grapevine store and opened it as a Sun Fresh Market in 2015. In 2016, H-E-B acquired the Grapevine store and five others in North Texas from Minyard.

H-E-B’s Central Market bought the six stores in order to operate just two of them—a 42,000-s.f. store at Midway Road and Northwest Highway, which is expected to open this fall; and one at McKinney and Lemmon avenues, which has no opening date yet. Once those two stores open, there will be seven Central Market locations in North Texas.

H-E-B also sold its acquired Sun Fresh Market in McKinney to Safeway/Albertsons, and another one in Dallas was sold to Lincoln Property Co.

Albertsons/Safeway also purchased three former Fresh Market stores last year. Two are in Dallas—Turtle Creek and Lakewood—and the other is in Fort Worth. There is no word yet on when those stores will open, but they also will operate under the Tom Thumb banner.

Amazon’s ninth Texas fulfillment center will be in Coppell

It will be Amazon’s third in Coppell and will employ 1,000 people in full-time jobs. The first Coppell facility began fulfilling customer orders in 2013 and the second launched during the 2016 holiday shopping season.

*Editor’s note: This is part of the North Texas Market Profile, which appears in its entirety in the March 2017 print edition of The Shelby Report of the Southwest.