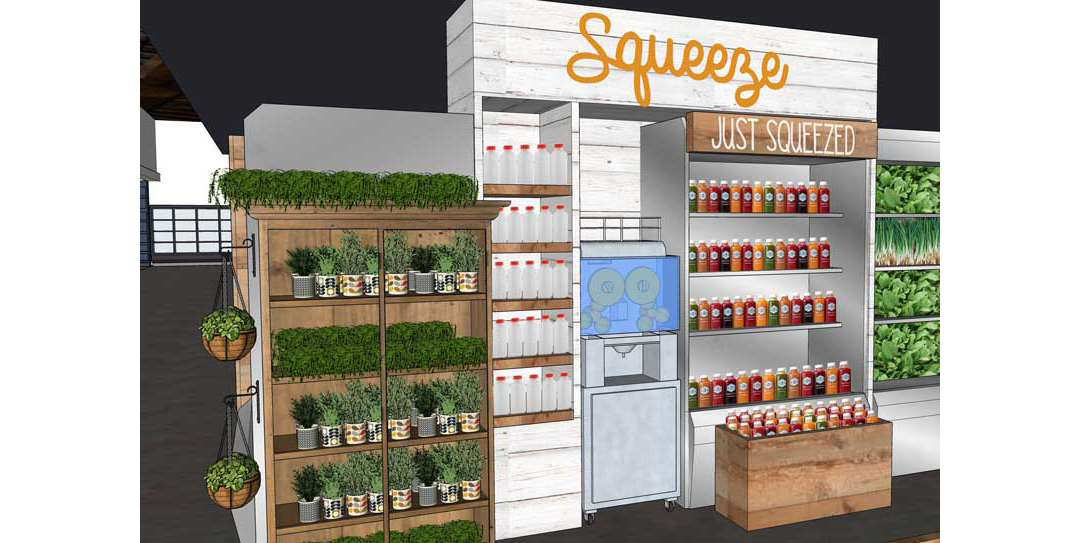 The 25,000-s.f. store on Mulholland Drive in Woodland Hills, California, located in a space formerly owned by Haggen, is the first major design departure for Bristol Farms in its 35-year history and is “a store that we’ve been dreaming up for a decade,” Kacie Davis, owner of KMDesign Co., which is implementing the design, tells The Shelby Report.

Unlike the somewhat heavy European design features the stores have had, “our main objective was to minimize the décor—to strip it away of all the excess noise in the store and let the food speak for itself,” she says.

Davis, who is the daughter of Bristol Farms Chairman/CEO Kevin Davis, has been working on redesigns for both Lazy Acres and Bristol Farms and has worked in the store design field for four years.

“The food is the only color in the Mulholland store; if there is other color, it’s the signage color which directly relates to the food offering,” she says.

Steve Howard, VP of perishables, says the new design “lets us bridge the older customer to the newer Millennial,” adding that Kacie is “bringing in some different colors and tones that keep us trend-setting while still keeping our same quality.”

The newly designed store was a year and a half in the making, according to Kacie.

The consensus among Kevin Davis, President and Co-CEO Adam Caldecott, advertising executives and other stakeholders was that this was the kind of store to appeal to the next generation.

In a press release about the store, Caldecott said, “We are excited to offer our customers an elevated shopping experience while maintaining Bristol Farms quality and food standards.

“With the Mulholland store, we are kicking off our new concept format and inviting customers to shop, stay, eat and play, becoming the culinary destination for the community. Through the interaction between customers and employees, as well as the store’s local involvement, the Mulholland location will be a place where our shoppers truly feel at home,” he said.

One of the distinct features of this new store is a food hall, which runs along the right wall of the store.

Because the entrance to the store is right of center, the food hall (and the produce department) are the first things shoppers see.

“We’re trying to accentuate that fresh feeling right when you walk in the doors,” Kacie says.

Howard adds that when shoppers “walk into produce, they get the color and the sensation of the fresh food experience. We’re 60 percent perishables and 40 percent non-perishables, and we really try to set that tone right when you walk in the door.”

The food hall has 20-foot-plus-high ceilings throughout “that just makes it feel like you’re outside in a farmers market,” Kacie says. “It has so much energy, and that energy really pulls you around the entire perimeter of the store.”

According to Howard, Bristol Farms’ goal is for a shopper to eat at the store at lunchtime and then “come back over the weekends or later that night on their way home from work” to shop again. 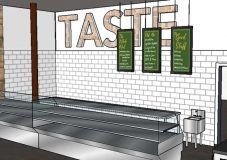 On the wall in the food hall are four-and-a-half-foot-tall letters that spell out TASTE. On the face of the letters are real recipe cards from Bristol Farms families, a way to show “the collaboration of people’s ideas within the company,” Kacie says.

The store’s artisan California bakery would not be complete without Bristol Farms’ beloved “The Cookie,” served warm all day as well as hundreds of small-batch treats from premium purveyors.

The floral department, which is to the left when one walks in, features wooden steps, “and the bouquets are just jumping off of those,” Kacie says.

Howard says floral is not an afterthought in this design but a showpiece.

“It will be our first time that our customer will be able to walk in and immediately interact with our floral team, so we’re excited about that.”

“For the holidays we’re going to have a white poinsettia, as well as a red poinsettia. She’s done some new and exciting things, brought a new look and a new flair to the department.”

The grocery department is behind floral. Kacie says the 25,000-s.f. size is ideal for Bristol Farms stores; that allows the stores to carry the center store items necessary to make them one-stop shops. More than 4,000 natural and organic grocery items as well as traditional grocery products and supplies are on shelves. More natural living and healthcare-type items have been incorporated into the store.

A wine and spirits cave offers both mainstream and “obscure libations,” the company says.

The meat and dairy departments are on the back perimeter of the store. More than 300 international cheeses are displayed in the deli/dairy section; the butcher shop carries prime and choice USA meats and also offers free seasoning and knife sharpening.

Another unique design feature is a bicycle mounted to the wall; the wheels are the Os in the word “food.”

That feature pays tribute to Bristol Farms’ “slow food” philosophy in addition to the fact that the store is located in a biking community.

“We’re trying to connect with the community and show them that we’re part of the community, too,” Kacie says.

The décor relies materials like wood, chalkboard and galvanized metal—things you might find at your local hardware store.

“We’re using ‘found’ resources; nothing is overly engineered,” she says.

It is the 13th Bristol Farms store.

Bristol Farms is planning to open three more new stores over the next 12 months; locations to be announced. 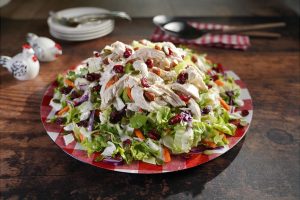 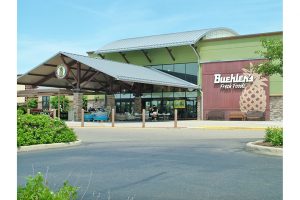