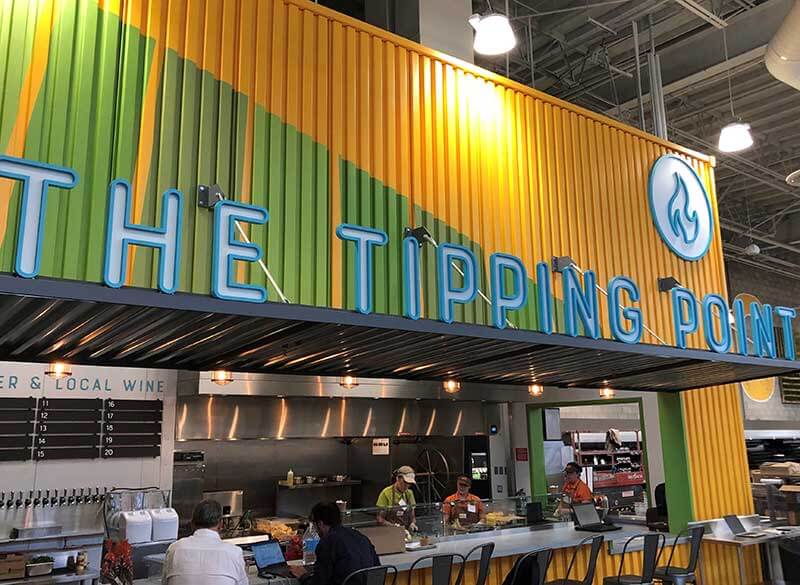 Save Mart, the flagship store of The Save Mart Cos. (TSMC), is opening a new location Oct. 2 in Modesto, California, featuring a fast casual restaurant called The Tipping Point. With both indoor and outdoor garden seating, the restaurant will serve tri-tip barbequed and served five different ways—wet or dry sandwich, torta, taco or salad, alongside street corn, churros and other side dishes. Guests may even choose to order a whole tri-tip.

In addition to its signature tri-tip, The Tipping Point will have a wide selection of local beer and wine on tap. When the store opens, it will feature Dust Bowl, Blaker Brewery, Heretic, Drakes, 21st Amendment and Tioga. It will also host four William Hill and Louis M. Martini wines on tap, along with a variety of bottled wines. Local beer and wine selections will change seasonally and be announced to followers on the store’s Facebook page.

“We have a strong identification with how good food brings people together—and tri-tip is a staple in the Central Valley,” says Nicole Pesco, CEO for The Save Mart Cos. “The Tipping Point gives the community a new gathering spot to enjoy this amazing food in a comfortable atmosphere—and you won’t have to clean the grill at the end of the evening!”

In the coming weeks, The Tipping Point food menu and other signature prepared foods from throughout the new store’s hot bar and service deli will be available for on-demand delivery by DoorDash.

TSMC, the largest family-owned grocer in California, operates 83 Save Mart stores throughout California and Northern Nevada. Based in the Central Valley, the company operates 207 traditional and price impact stores under the banners of Save Mart, Lucky, FoodMaxx and MaxxValue Foods. It also operates Smart Refrigerated Transport and is a partner in Super Store Industries, which owns and operates a distribution center in Lathrop and the Sunnyside Farms dairy processing plant in Turlock.