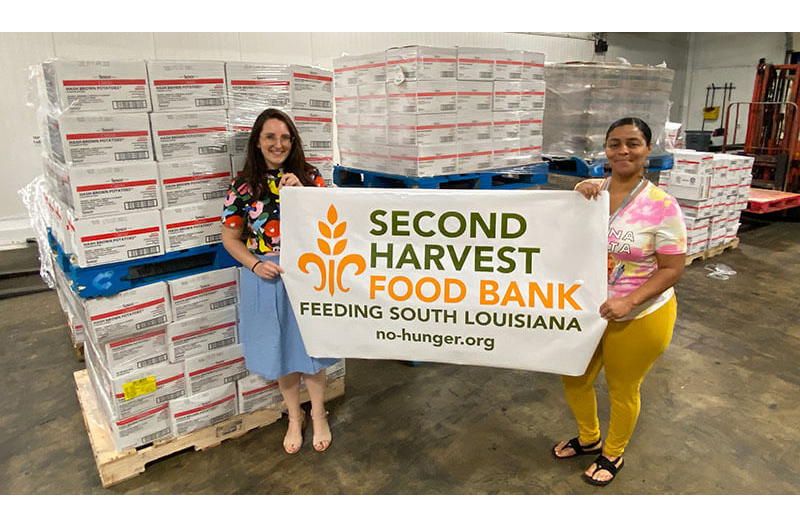 Continuing more than a decade of support of the fight against hunger, Rouses Markets this week donated nearly 14,000 pounds of food to Second Harvest’s response to the COVID-19 crisis.

“This amazing donation will help us prepare thousands more hot meals in our Community Kitchen,” said Second Harvest Executive Chef Susan Goss. “It’s such a wide variety of products that will be a key asset in our kitchen.”

The 18-wheeler load of frozen potato products include hash browns, sliced potatoes and other products.

Rouses Markets works with Second Harvest year-round. This donation was earmarked for children and seniors, two of our most vulnerable groups during difficult times.

“We know so many children rely on the meals they receive at school, and we’re working to make sure they and their families have three meals a day,” said Donny Rouse, CEO. “One in six seniors struggles with hunger or poor nutrition. We want to make sure they have enough food as well.”

Second Harvest’s Community Kitchen has greatly ramped up meal production from a regular 1,000-a-meal day to nearly 4,000 meals a day, according to Goss.

“With the help of supporters like Rouses Markets, we are on our way to our goal of 10,000 meals a day to help feed as many seniors, children and families impacted by this emergency,” said Goss.

For over a decade, Rouses stores have featured $5 and $10 bags of non-perishable food items guests can purchase, which are collected and sent to Second Harvest community partners.

The late Anthony J. Rouse Sr., founded Rouses Markets in 1960. Donny Rouse, CEO, is the third generation of the family to lead the family owned chain, which is one of the largest independents in the country. Rouses Markets has 64 stores in Louisiana, along the Mississippi Gulf Coast and Lower Alabama and employs over 7,000 team members.