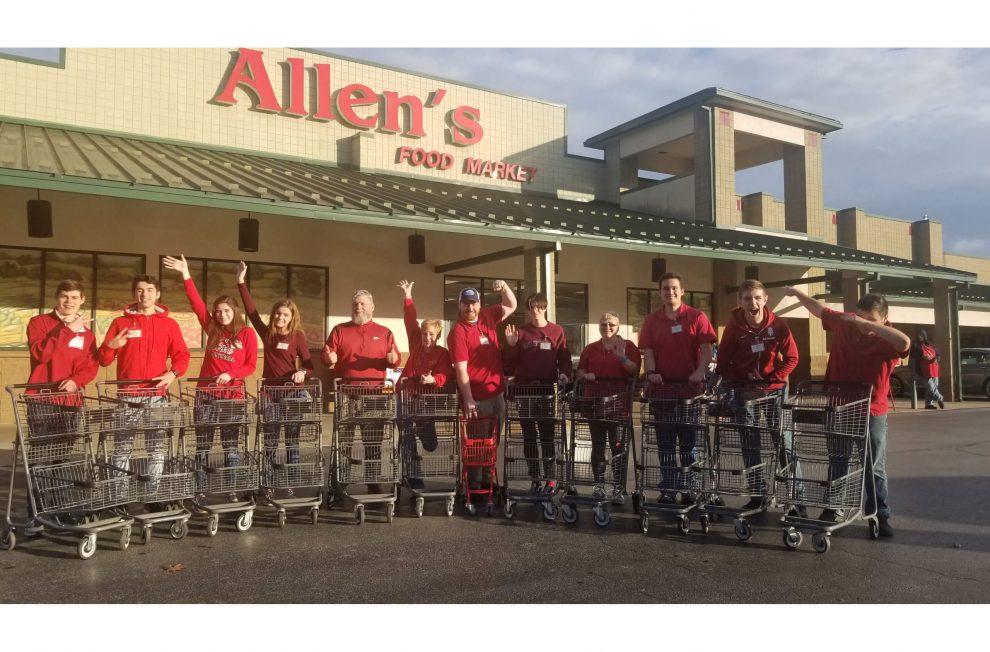 Bella Vista is a city of about 31,000 in the northwest corner of Arkansas, some seven miles south of the Missouri line. It lies in the middle of a resort area with a large number of retirees and also serves as a bedroom community to nearby Bentonville, home of Walmart’s headquarters.

Serving the Bella Vista community for the past 21 years has been Allen’s Foods. Steve Morrow has managed the store since the beginning on behalf of Tom Allen, the owner. Allen also owns Carter’s Foods, a family store in Vinita, Oklahoma, that has been in business since 1952.

Morrow said Allen gave him authority to run Allen’s Foods as if he owned it when he was hired. And that’s just what he has done.

“We are just a little, tiny train,” said Morrow, likening his operation to the classic children’s tale, “The Little Engine That Could.” He and his staff come to work each day thinking they can be a little bit better than the day before and outwork the big-chain competitors.

Morrow has been in the grocery business for 46 years, spending the first 25 of those years with Consumer Markets, a chain of about 40 stores in Southwest Missouri that closed in 1999.

Morrow enjoys the camaraderie with his shoppers and likes to make shopping an experience for them. He believes that’s what differentiates Allen’s from competitors.

Morrow visits with shoppers and their kids, joins staff members to sing happy birthday to customers and displays stellar report cards of top students. If someone observing an anniversary comes into the store, employees announce it over the intercom. But all of that has been derailed to a degree due to the COVID-19 pandemic.

“I love all the back-and-forth with shoppers, but it has gotten tougher with everyone wearing masks and people being more careful,” he said. “They are not as interested in hanging around and discussing things.”

Looking back to the hectic pace that began in March, Morrow said everything quickly went “nuts.” Suppliers couldn’t keep up with demand. He pivoted, using restaurant suppliers to augment the regular supply chain. Gradually, suppliers caught up.

The toughest challenge was with personnel, with several staff members departing due to health concerns. His employee base decreased as business soared. Recognizing the contributions of employees, Morrow paid “combat pay.”

Morrow believes in the power of social media, particularly Facebook. The store has thousands of Facebook friends. Every day, Allen’s promotes the business in some way.

That was especially evident during the early days of the pandemic. Store employees demonstrated the extra cleaning that had become part of their new daily routine and increased safety measures.

Morrow said the top social media priority is promoting the efforts of employees and the store’s latest specials. For example, each morning he notes the latest deals from the meat department. On a recent summer morning, a local farmer delivered a load of fresh corn. That was quickly posted.

“This is how we get our message out, and these days you have to have a message,” Morrow said.

“Previous to all of this, we would have people call us and ask us to put an order together for them to be picked up, and we would do that for them,” he said. “But right now, it’s not something we can manage. Some of my friends in the business say they have quit doing it because they can barely manage the influx of customers. Six months from now, we may give it a try.”

“For example, if the featured item is a roast, we will have the potatoes and carrots there ready to go with it, and have a roast cooking in a crockpot,” Morrow explained. “It’s not to serve. But they will smell it cooking, and we will have the instructions there for how to do a roast. The next day, it might be burgers.

“This has been especially appealing for people who are home more now, and may be cooking for the first time in a while. We have six butchers on staff. The head butcher has 50 years’ experience. Every one of them knows how to cook the items we are selling.”

Allen’s biggest growth area over the last few years has been organic and gluten-free foods. Morrow credits his son, Justin, the store’s assistant general manager, with building the natural foods section. In eight years, he took it from a small part of one aisle to a department that generates the third most business, behind traditional grocery and meat.

“People drive from the surrounding communities to shop our natural department because we have the largest selection and variety in our trade area,” Morrow said.

Complicating the myriad pandemic challenges, a driver accidentally drove into Allen’s in June after hitting the gas pedal instead of the brake. The car went through concrete and brick walls and came to rest in the middle of the natural foods section. The department had to close for about a month, resulting in a temporary financial hit.

Looking ahead, the looming challenge is when school starts back in some form or fashion. Like many stores, Allen’s hired a lot of students for the summer. If they return to school, that will create a void. That’s true every year, but Morrow said it’s even more of a dilemma now due to the difficulty in finding employees.

“I have a great crew,” he said. “The core of us have been together for 20 years. We have great leadership in our departments. I’m very bullish on how the rest of the year will go.”

When fully staffed, Allen’s employs 60. That is currently down to 50 due to the loss of some part-timers. Morrow said his counterparts with independent groceries in Arkansas report the same difficulties hiring. Allen’s doesn’t have self-checkout stations and offers carryout service, so the labor requirements at the front end of the store are higher.

Morrow began his career in 1974 carrying out groceries at a store in Joplin, Missouri. He likes to say he has never been promoted since, at age 62, he continues to carry out groceries for shoppers.

“I’m still a carry-out, 46 years later,” Morrow said.  “That’s the part of the job I love. If it were not for the shoppers, I wouldn’t be able to stand it. I don’t want to be a boss in an office. I’m out there in the front of the store, and they know me by name.”