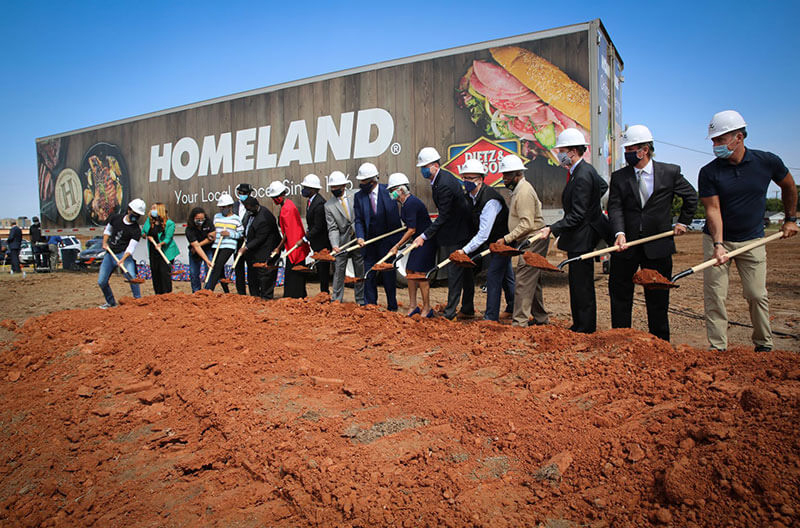 HAC Stores broke ground Oct. 1 on a 30,000-square-foot Homeland store in northeast Oklahoma City, an area considered a food desert. The company is supplying groceries to a smaller store in the same area to help fill the need.

Getting a full-service grocery store to northeast Oklahoma City has been in the works for more than 20 years. Former Councilwoman Willa Johnson served in the area and brought the need to the attention of city officials. City councilors that followed in her seat carried the same torch for bringing a store to the northeast side.

The city leaders also gained a champion in Cathy O’Connor, president of the Oklahoma City Alliance for Economic Development. Getting a grocery to the northeast area has been on her radar since 1998.

O’Connor has overseen the puzzle to get the grocery store, which included putting together the right site, the best finance partners and a good store operator.

“The lack of a full-service grocery store has been something we needed to try and solve, but we had to get all the pieces to come together,” she said. “Frankly, those pieces clicked together this time.”

The deal started with a land swap with the State Commissioners of the Land Office. O’Connor praised the office for its cooperation.

The Alliance is working with Arkansas-based Heartland Renaissance Fund and U.S. Bank to get New Market Tax Credits. The tax credits are designated specifically for new construction in low income areas. National Cooperative Bank is the lender and works with co-ops and has a specialty in the grocery industry. The city of Oklahoma City created a Tax Increment Finance District for the site and OG&E sold a small piece of land to the Alliance to complete the site and is working to move some utility lines.

“U.S. Bank and Heartland were both very impressed by the project, the overall community support and the economic impact, with the store creating 75 jobs,” said O’Connor. “This will be the first new investment of this scale in northeast Oklahoma City in a very, very long time. Both entities have sent representatives here, and we’ve done virtual tours. They were very impressed by Oklahoma City and the council’s leadership on this.”

While construction has started on the larger store, Homeland has been supplying groceries to northeast residents for about two years, though it hasn’t been in one of its own stores. The company bought groceries for RestoreOKC’s microgrocery, a 1,440-square-foot metal building on the nonprofit’s organic farm. Because the nonprofit was such a small operation, it was difficult to get an account with a large supplier.

In January, Homeland will provide more groceries for the Market at East Point, a retail center on NE 23rd Street. The 6,800-square-foot grocery store is backed by RestoreOKC. The store will offer grocery staples and organic produce grown at Restore’s nearby community garden.

Homeland President and CEO Marc Jones said the Oklahoma City-headquartered, employee-owned company is excited to bring the large full-service grocery store to the city and has been committed since 2016 to figuring out how to make that happen. He and O’Connor looked at several sites before deciding on the site not far from the Oklahoma state capitol.

He said the store will likely be the most diverse customer base the company has, with neighbors, state capitol employees, area warehouse employees and downtown residents coming to the store.

“This is a really interesting business opportunity,” he said.

For Homeland, this is only the beginning of its work, explained Jones. As construction progresses, there will be community meetings to discuss what the store should offer and what murals should be on the building. There will be hiring events as well to fill 75 positions.

And by fall 2021, Homeland will be operating a new store, which will have a bakery, a deli, a butcher and a pharmacy.

Jones said he commends O’Connor and the city of Oklahoma City for its perseverance on the project.

“It was incredible to see so many people work together for the good of the community,” said Jones. “It will create an impact in a part of town that needed a positive impact.”