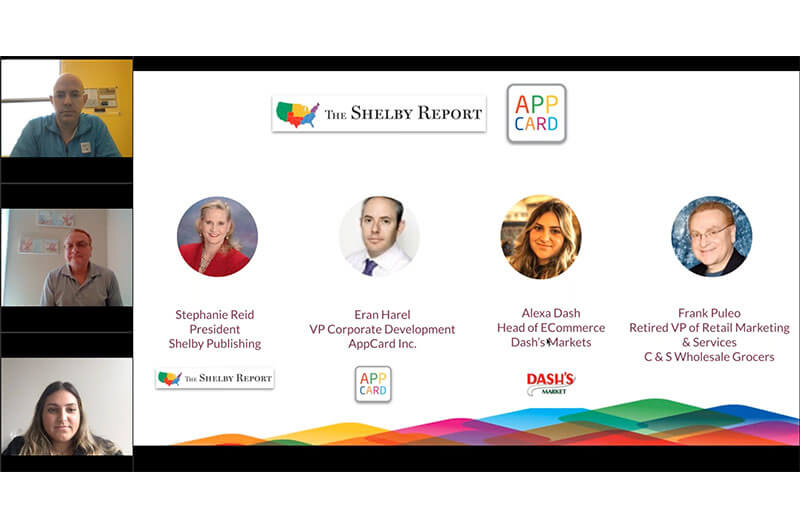 Grouping customers has become a tactic of the past and grocers today have an opportunity to fulfill the shopping experience in one trip.

The Shelby Report recently partnered with AppCard to host a webinar, “Driving Value For The Grocer: Personalized Marketing and Shopper Analytics.” Participants learned how independent grocers of all sizes can gain control over the conversation with shoppers and personalize that engagement by making data actionable, while also reducing their advertising costs and increasing conversions.

“Moving beyond the traditional loyalty platform, AppCard’s multi-channel engagement and the industry’s smartest analytics provide brick-and-mortar retailers with the solutions necessary to successfully compete with reemerging restaurants and the growing use of Amazon,” Reid said.

Kicking off the conversation was Eran Harel, VP of corporate development and strategic partnerships with AppCard. Joining later were Alexa Dash, head of e-commerce at Dash’s Markets, and Frank Puleo, retired VP of retail marketing and services at C&S Wholesale Grocers. Both companies have used AdppCard’s services.

“I would start by saying that we do not believe in loyalty per se,” Harel said. “…The shoppers who are enrolled into a rewards and loyalty program – that does not make them a loyal customer. But rather, if we are able to build a relationship that entices behavior and results with the shoppers – increase of their recency, frequency and monetary span, and do that with personalized offers and rewards that derive not only of their past purchase but future intent, delivering the shoppers’ preferred touch point – then and only then we can earn the customer loyalty,” Harel said.

He went on to say the focus needs to be about empowering independent grocers to be able to control their conversation with the shoppers, whether that is for loyalty and promotion, digital coupons or their customer relationship management.

One can make life easier as an operator to have point of sale data, CRM and marketing all on a single dashboard, and doing it in such a way that encompasses any touchpoint possible.

AppCard serves 1,400 independent grocers throughout the U.S., an estimated 19 million plus shoppers. The company makes sure its focuses on empowering the ability to communicate with shoppers, which allows retailers to identify them and drive repeat purchasing, reducing advertising costs.

Transitioning to Puleo and Dash, Harel noted how the industry has changed dramatically in the past year. He asked to what extent do they think shoppers’ expectation and experience has changed.

“When you do have those customers in your store, you have to make sure you’re doing everything to be their No. 1 store and to get their returning business,” she said. “And you want to be able to offer them things that the bigger stores have, such as these great loyalty and coupon programs

According to Puleo, shoppers weren’t really expecting an omnichannel or more intimate relationship with their retailer.

“I think their relationship with the retailers has really stepped up and they don’t really want to shop around,” he said. “And if you give them more personalized offers, you’ll get them to come to your store instead of somebody else’s.”

Dash shared some of the campaigns at her family’s markets in Buffalo, New York, which Harel described as “exceptionally successful.” These included: a survey campaign (with incentives) to help the team learn more about customers; punch card campaigns; and a tiered targeted campaign to increase basket sizes.

Industry wide, Dash’s stores are known to have an “exceptionally high” coupon redemption ratio, according to Harel. He mentioned the AppCard in-lane customer facing terminal (NTR) placed next to the POS, which help “simplify shopper participation with easy access — and ensure efficient data capture and more complete shopper profiles,” according to the AppCard website.

Dash said it’s contributed more than company officials “could have ever expected,” in regard to shopper interaction as a whole and coupon redemptions in particular.

“They’ll start looking and they’ll say, ‘OK, I’m going to come back next week, because I’d love to use all these coupons.’ Or they might not have even realized that these coupons were available without the use of this machine,” she explained.

Harel then asked what Puleo and Dash think independent grocers should do in order to be successful and what they need to prioritize in their programs.

Puleo listed being on the forefront of technology and embracing it as the top priority. No. 2 is to treat each shopper as an individual and, thirdly, using AI to its full potential.

“Being able to target those lost shoppers is super important because it is so hard to get people to go from shopping their whole life at one store to one day, waking up and deciding to come shop at your store,” she said.

Harel then asked what independent grocers who haven’t launched a program like AppCard need to know and be aware of for a successful launch.

“I would definitely say you’re going to want to start small with maybe one campaign and a point catalog and gain the customers trust,” Dash said.

“That way you can grow it and have the loyalty of the customer and the trust of the customer. You don’t want to try to do too much, and nobody knows what’s going on,” she said.

Puleo recommended making sure the team has the program down well.

In response to an audience question. Dash said using a program such as AppCard works well for small independent grocers. She mentioned the time commitment is ultimately up to the operator, with a brand advisor from AppCard always there to help.

“I do it all myself with the help of maybe one person,” she said. “So that’s what’s so great about AppCard because…they’ll give you somebody to work with, and they’ll help you create campaigns.”