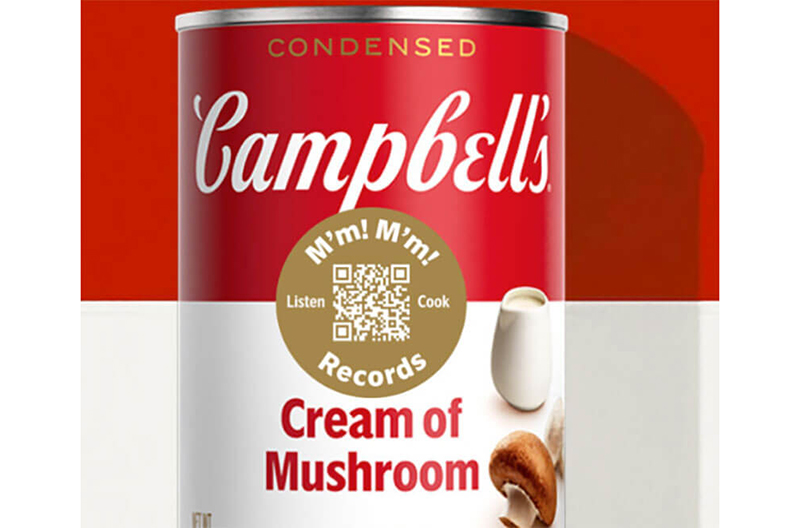 Camden, New Jersey-based Campbell’s has partnered with Universal Music Group, a leader in music-based entertainment, to unveil a specially marked label on its red and white cans that unlocks reimagined classic songs performed by recording artists, each paired with their favorite brand recipe.

According to a recent Campbell’s survey, 73 percent of home cooks listen to music while preparing a meal, and one third specifically cite music as a source of inspiration in the kitchen.1

With more Americans cooking, Campbell’s partnered with select Universal Music Group recording artists Julia Michaels, Peach Tree Rascals, Jac Ross and Mickey Guyton to take songs and recipes from their own memorable moments and put a fresh spin on them.

Each week, a Universal Music Group artist will drop a new version of a remade song paired with their personal favorite Campbell’s recipe.

“I’m thrilled to drop my new song and partner with Campbell’s,” said Michaels. “As someone who is newer to cooking, Campbell’s has become the starting point for me to create simple and delicious recipes that fit my hectic schedule and build my confidence in the kitchen. I can’t wait to see how fans find inspiration from this playlist and the meals they’ll cook up as a result.”

This partnership with Universal Music Group continues Campbell’s efforts to modernize its brand. Throughout the pandemic, the brand connected with millions of new households, and with back to work and school ramped up, consumer demand for quick and easy meals continues to rise. Campbell’s recently unveiled a redesign to its red and white label, marking the first new look in more than 50 years.

“How music can single-handedly set a mood is undeniable,” said Linda Lee, chief marketing officer for meals and beverages at Campbell Soup Co. “Partnering with UMG and their artists to create music that inspires American home cooks is a unique opportunity for Campbell’s to bring a bit of inspiration to those daily dinner dilemmas beyond what’s on the table.”

Campbell’s  also will launch the Sounds Good Tonight SoundCloud contest on Nov. 15. Consumers and aspiring musicians will be encouraged to submit their own cooking-inspired anthem for an opportunity to partner with Campbell’s and win $20,000. The contest will live in a branded microsite, offering a downloadable sound kit full of Campbell’s-inspired sounds for young creators to remix, reimagine and create a new song that can be served as the perfect pairing to a night cooking at home.