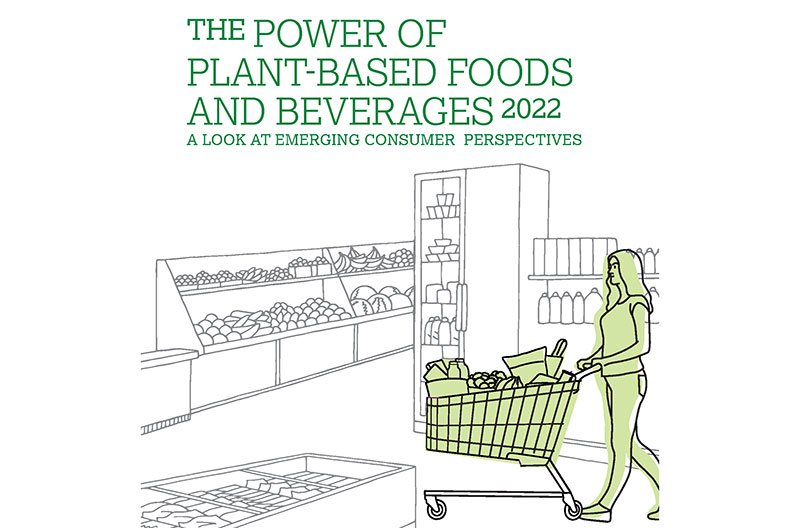 FMI – The Food Industry Association, has released the “Power of Plant-based Foods and Beverages” report which is the first comprehensive review of the broad plant-based topic, addressing naturally plant-based foods such as fruits, vegetables, beans and whole grains and alternatives to traditional animal-derived items.

FMI’s analysis found nearly half of shoppers put a lot or some effort into selecting plant-based foods or beverages.

“More than 40 percent of shoppers at least occasionally eat a meat, dairy or seafood alternative, but dairy alternative sales are more than twice those of meat alternatives,” said Steve Markenson, director of research and insights. “The plant-based foods most likely to be regularly consumed by shoppers are naturally plant-based – fruits and vegetables (75 percent) and beans, nuts or grains (47 percent).”

“Our ethnographic research suggests consumers are seeking out plant-based foods and beverages primarily for both taste and nutrition,” said Krystal Register, senior director for health and well-being. “The food industry has an opportunity to provide guidance and educate consumers on overall healthy eating approaches that include alternative options in alignment with the Dietary Guidelines.”

Rick Stein, VP of fresh foods, underscored how retailers might work with their shoppers to better define where these categories appear in the store. “There’s no consensus among shoppers about where to find plant-based alternatives, which demonstrates the opportunity for both cross-merchandising in addition to creative in-store messaging,” Stein said. “For example, for meat alternatives, the top choice is not the meat department – it’s a designated plant-based foods section and the frozen foods section, followed by the meat department.”

The research found that curiosity is a major characteristic for shopper experimentation. Millennials are more likely than Gen X and Boomers to put effort into selecting plant-based foods, and nearly half of shoppers buying plant-based foods and beverages live in households making more than $100,000 and have children. Shoppers interested in these foods and beverages tend to have bigger basket sizes, but also shop online.

NielsenIQ sponsored the report and provided sales data and analysis for it. A comprehensive methodology was undertaken for the report, including a consumer survey, digital consumer ethnography, consumer interviews, retail and manufacturer interviews and sales-data review.

“As the lens of plant-based expands beyond meat and dairy alternatives and we see ‘plant-based’ marketing claims on food and beverage products, the segment is now worth nearly $10 billion,” said Sherry Frey, VP, total wellness, NielsenIQ. “This research comes at a critical inflection point that will help the industry understand consumers and their drivers around plant-based decisions.”

FMI’s report is a new addition to the association’s portfolio of existing consumer analyses regarding produce, meat, bakery, health and well-being, foodservice and private brands.

The full report can be accessed at FMI.org/PowerofPlant-Based.