Home » At AJ’s, Focus Is On ‘Bringing Best Of The Best’ 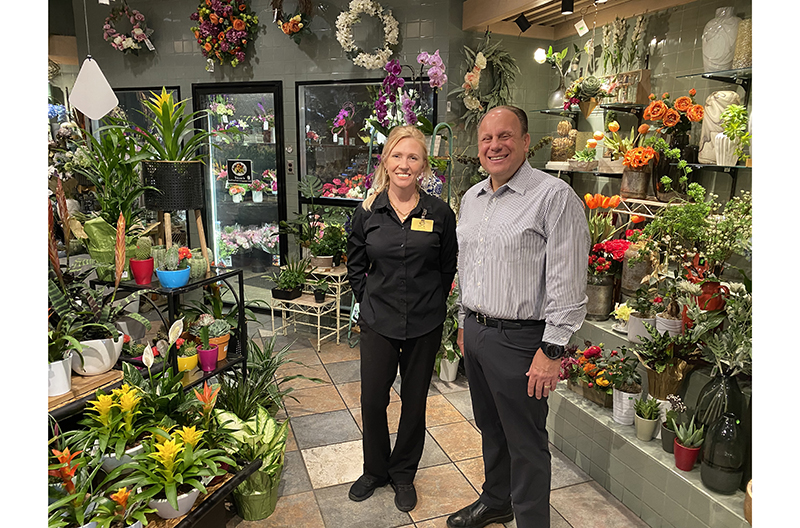 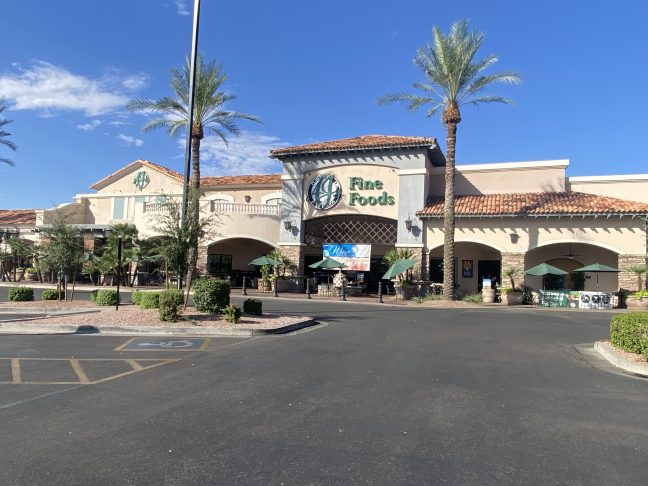 In the floral department, Mead and Lori Sandin, floral manager, discussed AJ’s popular gift baskets. Some are pre-made and others are customized to customer preferences. The baskets are very popular during the holiday season, for either personal or corporate gifts.

Items such as wine, fruit and cheese can be included in gift baskets and AJ’s floral staff are educated on those options, Sandin said.

Peonies are a seasonal favorite and the department also offers roses and a selection of Hawaiian flowers directly from Maui. “We are one of the florists here in the East Valley and in Scottsdale that can purchase those,” Sandin said.

Pre-wrapped bouquets are available, but Sandin said they are “one on one with customers when it comes to floral delivery with types of arrangements. We’ll pretty much work hand in hand with all departments, especially with catering.”

Mead added it is a full-service flower shop. With COVID-19 having affected smaller flower shops, he said AJ’s is the “go-to now.”

In the meat department, much is prepared in-house. Mead said seafood is delivered fresh six days a week. Much of AJ’s offerings are high end, such as dry scallops that have not been processed or treated, Mead said. AJ’s also has a heavy focus on a sustainable program, including wild-caught shrimp.

Prime beef is available, with some stores having dry aging rooms. Choice cuts are offered along with Alaskan salmon when in season. And there’s fresh, wild-caught halibut.

“Again, we have a real focus on sustainability,” Mead said.

He added they have several value-added options, such as kebabs. “These are all our own recipes,” he said, noting they use local spices when available. “Just trying to make life easier on our guests.”

Because AJ’s is smaller, with 11 stores, there is more opportunity to have “mom and pop” businesses start there. He said as the local businesses are able to handle larger quantities they may be moved into the Bashas’ format.

While the other banners offer organic produce, it’s a signature offering at AJ’s.

“We have a dedicated organic section,” Mead said. “Our focus is on specialty and premium – bringing the best of the best.”

Woodward added that the AJ’s staff does a good job with merchandising and vignettes. “There are themes, just like those gift baskets are themed about ice cream or movie night,” he said. “Their endcaps, their vignettes – they’re very good merchandisers.”

Moving into the wine department, Woodward said all AJ’s stores have cellar masters. “They are probably some of the most educated people in the industry,” he said.

AJ’s carries high-end brands along with less expensive wines, offering a wide variety of choices. It also carries wines from small vineyards that produce for AJ’s.

The cellar masters have had a rosé program for about 15 years. 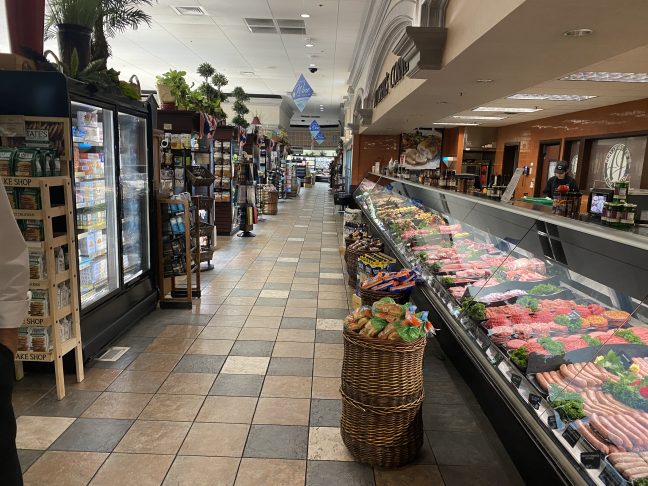 “They’ll taste through probably 100 rosés and then try to bring unique and specialty offerings that maybe the market hasn’t seen,” Mead said.

Mead added that AJ’s will have wine tastings in-store, with some locations having their own tasting bar. A special tasting event, the Summer Wine Spectacular, sold out quickly, with 400 people in attendance.

He said the stores offer a program of 40 wines $13.99 and under. “Our team literally will taste hundreds of bottles to get to this,” Mead said.

“They do a good job tying the product in the store together with an event that also supports our charities and our community,” Woodward said. “It’s kind of a win-win situation.”

In addition to its wines, Mead said AJ’s has a great bourbon program. He said three team members would soon be visiting Kentucky, including the head of the cellar master program.

“They will actually taste single barrels and then they’ll purchase those, bring them back and they’ll be bottled for our guests as an exclusive to AJ’s,” he said.

Turning to AJ’s tequila program, Mead said last year they bought a barrel of bourbon then sent the empty barrel to Mexico, where it was filled with tequila. “We had a tequila that had aged in a bourbon barrel,” he said.

Woodward said AJ’s does a good job with craft beer, offering a popular program where customers mix and match. Local breweries are also featured in the department.

The store has a Cigar Emporium, which has lockers that used to be available to customers. Woodward said customers used to buy their cigars, lock them up and then stop by and get them at a later date.

Mead said during golf season a lot of golfers come in to buy a cigar or two for the course that day. He said between the cellar masters and their distributor, they work on having a “best of” program. “As cigars are rated, we really try to rotate in and out some of the top cigars,” along with the classics.

Another popular item in the store is its sushi, prepared daily by AJ’s sushi chefs.

In the deli, AJ’s has an olive bar. Mead said they are still offering olives in containers as they have not gotten back to full service due to COVID. Woodfired pizza is available, made to order or by the slice. The deli features a sandwich program, along with salads.

“All salads are made in-house, so we have a salad chef at every store,” Mead said. “Typically, we average around 40 to 50 varieties of salad made daily.” 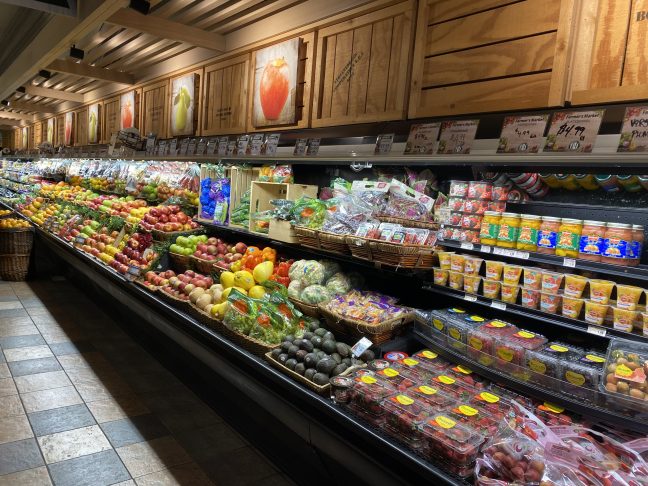 Continuing the tour, Mead noted the tags denoting local products. There is a focus on going to farmers markets to find local producers and let them know they have an opportunity with AJ’s.

“We’ll spend the time and try to help them through the process, whether it’s educating them about certification they have to have, licensing and insurance.”

Moving to the center of the store, Mead talked about Chris Bianco’s brand of canned tomatoes. He got his start with his pizzeria in the back of AJ’s in its original format, before it was bought by the Bashas family. He later opened restaurants and was just nominated for the James Beard Award, Mead said.

“When he started canning his own tomatoes, he came to us and we started selling them,” he said, adding that they feature him and try to tell his story and include him in their events.

“That’s the cool thing about AJ’s,” Mead said. “Every aisle is like a little discovery. It’s really what makes AJ’s AJ’s. You come in, and you’re always delighted and surprised.”

He said that a buyer, Steve Lefevre, went to Italy with an importer and spent 14 days going from town to town. They visited two towns a day, meeting artisan producers of various products. AJ’s imports a container of such products a couple of times a year “to bring unique products to our guests,” Mead said.

In the oil section, there is a wide variety of olive oils, along with avocado, sunflower, sesame and almond oils.

Mead said they focus on educating the staff, having them go through and taste several of the oils to better serve the customers.

They also listen to requests, which is how AJ’s began carrying Tate’s Bake Shop cookies. “Years and years ago a customer actually brought them back from New England and said, ‘Hey, can you get these?’”

AJ’s selection of specialty chocolate bars, is “definitely one of the best in the country,” Mead said. He noted a brand made by a small chocolatier in Utah. “The owner used to call on us personally, and we would ship it over from Utah and bring it in,” Mead said.

Jeni’s Ice Cream, based in Ohio, is another example.

She came to their attention after one of their chefs was talking about her after an appearance on the Food Network. One of AJ’s buyers reached out to her to see if she was interested in selling her products in Arizona. She told them she had a large following of people originally from Ohio who now lived in Arizona.

“She said if you guys bring it in, I’ll share with my fan group that you guys have it,” Mead said. “So long story short, we brought it in…it was a smash success, just huge.”