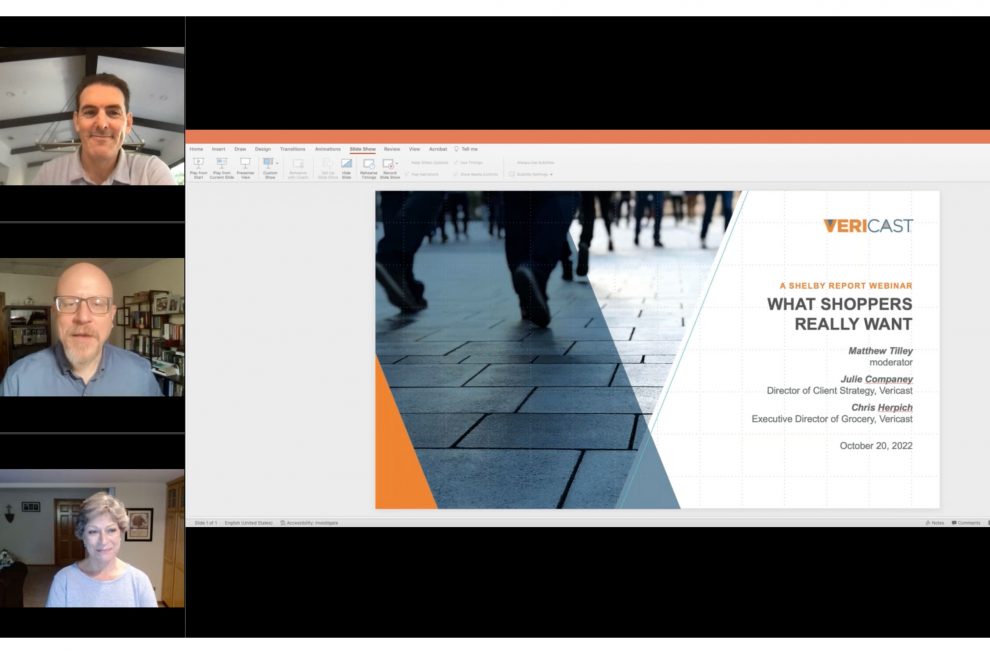 The almost hour-long webinar, held Oct. 20, featured a question-and-answer discussion between Tilley and the two presenters.

What is driving consumer behavior?

“I don’t think it’s any surprise to anybody on this webinar that it’s all about the inflation in the economy,” Companey began. “That’s the impact that we’re all feeling no matter if we’re going to the grocery store, the restaurant, filling up our tanks for our cars.”

Companey is responsible for collecting and understanding the data which was presented by Vericast in its CPG and Grocery Trend Watch report, a copy of which was available to download for free during the webinar.

“What’s interesting in the stuff I’ve been studying is, this is considered to be really dramatic inflation. This is the level of inflation that most consumers in the U.S. have never been exposed to,” Companey continued. “The younger generations, they have absolutely no familiarity with anything greater than a 2 percent inflationary level…Whereas the older generations have been there, done that. They understand what we’re dealing with, and they have a high level of concern about inflation.”

She mentioned an article that was previously published by The Shelby Report. The article cited Dunnhumby Marketing Company’s consumer tracker, stating that 64 percent of U.S. consumers could not afford to have an unexpected expense of $400 or more.

“That alone kind of gives you an idea of the impact of what we’re all dealing with…What we’re also seeing is, as a reaction to inflation, higher income shoppers are actually shifting their behaviors a little bit more dramatically than you would expect. They are going to Aldi, they’re going to Walmart, in fact, both (grocery chains’) leaders have recently spoken publicly about how they’ve been winning middle- and higher-income shoppers…That tells you this is not just affecting that low-income shopper. It’s everybody,” Companey said.

She said that retailers all around the country are experiencing a dramatic increase in private brands sales.

“They have actually more than doubled during Q2 versus Q1,” she said.

Consumers are becoming more savvy and utilizing more options to find deals with their favorite retailers. They are continuously checking and comparing prices in online coupons, deals and sales while comparing those prices to other retailers and comparing prices via the print circular before and while they’re shopping.

“There are categories where shoppers are willing to say ‘You know what? I don’t need to buy my name brand products any longer. I’m willing to trade down’ in those particular categories…categories like paper goods and cleaners are where consumers are actually thinking ‘I can trade down to a private brand’ the most.”

“They want to replace that restaurant meal that they feel like they just can’t afford. So they’ll splurge on nicer quality meats for one special meal maybe during the month or during the week.”

What about the convenience factor? How is that affecting consumer habits?

Because consumers have returned to their typical habits and behaviors, those grocers hoping to get a slice of the convenience-oriented consumer’s wallet are going to have to work harder, according to Companey.

“These shoppers, they’re actually, in many cases, buying their freshly prepared meals on the same day they plan to eat it. It’s part of their grocery shopping routine. They’re thinking about these freshly prepared meals, so why not make sure that, whether it’s a day of part advertising or some other avenue, you are in front of the customer as they’re literally time starved,” she said.

“There is a value equation to every trip, and some are going to be willing to pay more if they’re time starved. I think that’s really kind of a strategy that (businesses) are taking for urgent home delivery. On the other end of the spectrum, there are those that are focused more on saving and are willing to cross channels, stores, etc. to get the best deals,” he said.

What things grocers are dealing with when considering meeting these needs?

“The first thing that comes to mind is the overall competitive environment. There’s always a push-pull dynamic here and the fight for dollars or share of wallet continues to be fierce, Herpich said.

He explained that grocery, as a high-volume, low-margin industry, cannot afford to “lose a trip.” This becomes complicated by the increasing number of options for consumers as well as the continued economic strain and omnichannel presence consumers are enjoying.

“Shoppers are willing to search for the best deal, best product before committing to a purchase. This obviously has nothing to say about product availability and the importance there,” Herpich explained.

Citing the CPG and Grocery Trends reports, he stated that Millennial parents and families continue to mostly prefer shopping in store compared to online. These trends are also echoed in decreasing brand loyalty. Herpich recommends keeping this and other factors in mind to continue mixing up their consumer outreach strategies.

Other topics covered in the webinar included: possible trends in the future, advertising suggestions and other consumer worries.

To view the on-demand webinar from The Shelby Report, click here.