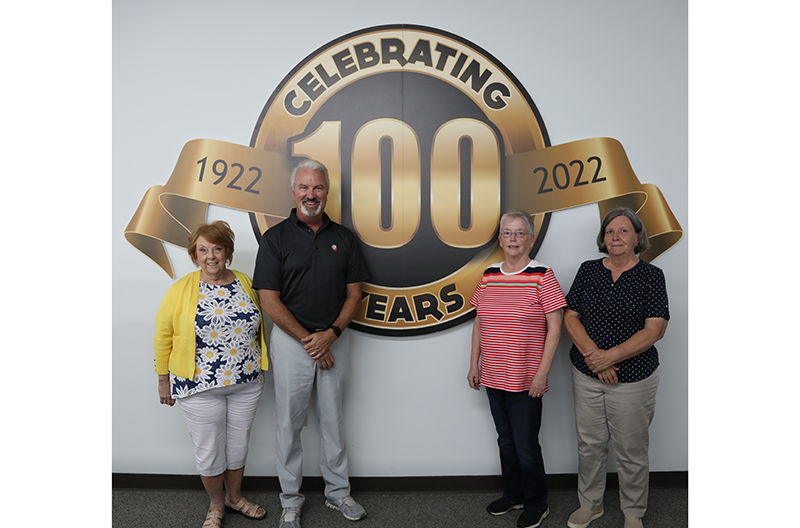 Laurel Grocery Co. is a 100-year-old, family-owned and operated company. That family dynamic is extended to its employees, as well. Being considered family by an employer goes a long way in retention, as evidenced by the number of longtime workers at the wholesaler.

That hasn’t gone unnoticed by Chairman and CEO Winston Griffin.

“We have a lot of long-term employees, which is wonderful,” he said. “I love our Christmas gathering, which is the one time a year when we all get together in one place, have a meal together, have drawings, presents, and we give service awards for the long-term employees.”

Each year he gives awards for 25-40 years of service. For the past two years, he has presented 50-year awards.

“That says something extraordinary,” Griffin said.

He added that Laurel’s employees are “the most important” and the company takes care of them the best it can.

“It’s the fine people of southeastern Kentucky who have made Laurel what it is – good, hardworking, family-loving people that have been here a long time and don’t want to move out of the area,” he explained. “They are glad there’s good jobs here and they enjoy working here and living here. That’s the backbone of the whole organization.”

As part of the The Shelby Report’s celebration of Laurel being named Wholesaler of the Year for its Midwest and Southeast regions, five of those long-term employees shared their experiences at the company.

Susan Adams, human resources director and payroll, has been with the company for 30 years. She recalled that she had only been working there for a couple of weeks when her father had a heart attack.

“I was afraid I was going to lose my job to take care of him,” she said. “Bruce Chesnut told me to do whatever I needed to do to take care of my family, as that is the No. 1 priority.”

Adams started her Laurel career as a buyer’s assistant for two years, then moved into advertising for 12 years.

“Back then, we had to run the ad pictures through a waxer and stick them to the ad templates. We had to print out the color plates and take them to the printer,” she said. “Almost everything was done manually back then. Each designer had a set of stores that they worked with. This was my first stint in advertising at Laurel.”

From advertising, Adams transferred to retail accounting, where she handled store payroll for two years before moving back to advertising.

“As a creative person, the opportunity to rejoin the advertising team appealed to me. A lot had changed in the process since I was last in the department. Everything was done on a Mac using Adobe software, which was a learning curve.”

In early 2011, Adams moved again when an opportunity opened as an accounts payable clerk. During this time in accounting, she was trained as a backup for payroll and payroll taxes.

In 2016, she became payroll manager and in 2019 took on the responsibility of human resources director while keeping her payroll duties.

“In my time at Laurel, I have been afforded many opportunities to grow and progress. What I have found is that if you put your heart into your daily tasks and stick with it, you can have a great career,” Adams said. “One of the things I love is that Laurel really does feel like a family – everyone knows everyone’s spouse and children. It is a really tight-knit group of people.”

Brenda Givens, in accounts payable expense, has been with Laurel for 51 years. She said Bruce and Steve Chesnut are close to her in age, while Winston Griffin was about 9 years old when she came aboard.

She recalled working with Elizabeth Griffin in the summer and they would get Winston, who was the youngest, to “go to the candy hole and to bring us back gum and candy.”

She said Laurel has been a family to her. “I grew up in the company with Winston, Bruce and Steve. God had a hand in my joining this company, and I feel that is why I have stayed.”

When she first started working at Laurel, Givens said she needed a car. She had moved from Middlesboro to London and didn’t know anyone locally. When she went to the bank for financing, she was told she needed a co-signer because of her age and being new in town.

“I had nowhere else to turn, so Mr. (George) Griffin co-signed my loan so that I could get a car. I was so grateful to him for doing that for me,” she said. “From that point, I knew that he had a heart for people. He knew each employee and what was going on in their lives.

“The family has been very good to me. I have enjoyed every moment of my time at Laurel and wouldn’t change anything about it.”

Givens said after losing her husband, her Laurel family has become even more important.

“As long as I can remember how to get here and what to do, I don’t want to retire – I want to keep working.”

Eileen Murray, a buyer and buyer trainer, and Cosetta Hale, accounts receivable manager, started at Laurel about the same time – about 50 years ago.

The women started with the company by keying orders. They would have to physically wait on the sales staff to go out and get ordering strips from the stores and bring them back. In some cases, that could keep them waiting until after hours on a Thursday or Friday.

Murray said she is thankful to the Griffins and Chesnuts for her job, which has helped her to raise her family and stay in Laurel County. She has four children and all of them have worked at the wholesaler at some point. And one still does – daughter Melissa Caudill is Laurel’s controller.

“The owners really make you feel like family. If things were not going right, they would always bring you into their office to talk to you about it,” Murray said.

She shared that an older lady at her church, who knew she worked at Laurel, told her she would have a job as long as she wanted it, adding that it was “the place” to work.

Murray also noted that when she and Hale were hired there were not many places to work in Laurel County, which caused people to leave the area.

Hale said she is thankful to the owners, who have treated her like family. She said they helped her husband get a job at Institutional Distributors, a sister company at the time, so they could stay in Laurel County. Her daughter also worked for the company at one point.

“When my daughter started working at Laurel, I introduced her to Bruce [Chesnut] and he said, ‘I feel like I know her, I’ve watched her grow up on your desk through the years,’” said Hale, referring to photos on her desk each year.

Hale also recalled Winston Griffin’s mother, Elizabeth “Sis,” used to invite them to her home during the holidays and would take them out to eat. “She was really nice and genuine,” she said.

Both Murray and Hale are still going strong and enjoy walking together when the weather allows.

“We’re just not walking quite as fast as we used to,” Hale said.

Doug George, CFO, has worked for Laurel since Aug. 1, 1985. He said his grandfather opened a store about the same time that Laurel got its start in 1922.

“He was in the grocery business until 1969, when my mother took the store over. Back then, stores were the only social gathering place in the community and the post office was located in the store [Marydale, Kentucky],” George said.

Don Chesnut used to call on his grandfather. When his mother took over the store, she was a Laurel customer. George said back then, “You got a job at one of three places – Laurel Grocery, Griffin Pie [now Flower’s Bakery] or Kern’s Bakery. His father worked for Laurel.

“Since I had an association with Laurel from my family, it was only natural that I pursued a job here,” he said.

George said his dad’s plan was to get him a job in the warehouse so he would change his mind about going to college. His father died in March 1986. “I had no interest in accounting whatsoever but decided to go to college while working at the warehouse.”

While attending school, he worked as a security guard, order router and computer operator.

“I would come in on Friday night at 9 p.m. and leave Sunday, when all orders were complete. This was the last two years I was going to college through the week,” he said.

One of his accounting professors suggested he major in accounting because George performed well in his class.

“Bruce Chesnut asked me one day in the warehouse if I was going to college and asked what I was majoring in. He said to let him know when I graduated, and he would have a place for me in the accounting department. When I graduated, I told Bruce and he said perfect timing – we have an opening.”

After graduation, he moved to the administration building as a staff accountant. He studied and acquired his CPA under Philip Smith, who later decided to go into practice for himself.

“I went to Bruce and told him that despite being young, I would give him my all. I took over as controller in 1999. When Bruce stepped down as CFO, I was promoted to CFO in 2006,” George said.

He noted that Laurel made it possible for him to become a CPA, a Chartered Global Management Accountant, a Certified Valuation Analyst and to earn his MBA. He has seen firsthand that Laurel has continued to get stronger through the years.

“Laurel is everything to my family,” he said. “When I was growing up, in my house if it did not come through the Laurel warehouse, it did not go on our table. That’s just the way it was. I was brought up to be loyal to your employer. Everything I have is because of Laurel.”