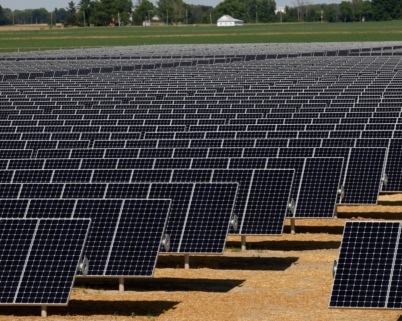 Campbell Soup Co., BNB Renewable Energy Holdings, Enfinity America Corp., FirstEnergy Solutions and SunPower Corp. will today celebrate the completion of a 9.8-megawatt (MW) solar power system at Campbell’s manufacturing facility in Napoleon, Ohio. More than 200 jobs were created during construction of the system, which is now generating the equivalent of 15 percent of the facility’s annual electricity requirements.

“This system is a milestone achievement that will reduce Campbell’s operational expenses while generating clean, renewable power that contributes to the environmental health of our friends and neighbors in Napoleon and across Northeast Ohio,” said Dave Stangis, Campbell’s vice president of corporate responsibility and public affairs. “Campbell is committed to managing our environmental resources with tangible initiatives that produce measurable results.”

BNB Renewable Energy Holdings developed the project from its inception in 2009 in partnership with Campbell. A key to the project’s success is a power purchase agreement (PPA), which guarantees that Campbell will buy 100 percent of the energy generated by the photovoltaic (PV) array. Additionally, BNB secured an agreement with FirstEnergy Solutions, which contracted to purchase all of the solar renewable energy credits and environmental benefits associated with the project.

Enfinity co-developed the project with BNB, arranging term financing for the project with Wells Fargo and working with BNB to manage the engineering, procurement and construction (EPC) contract with SunPower. With the closing of financing and the completion of the purchase, Enfinity, working with BNB, will provide operating and maintenance services for the life of the system.

Matthew Baird, a principal and founder of BNB, said, “BNB and Enfinity have shown what’s possible when focused development expertise meets a ready source of funding. 2012 is going to see more of these solar success stories.”

Enfinity America Corp. CEO Rafael Dobrzynski said, “Large-scale distributed generation installations like this will be an important part of the way forward for Enfinity, and indeed the solar industry as a whole. More and more commercial and industrial companies are seeing that on-site solar energy is a viable business proposition and a brand-builder, as it shows a commitment to sustainable energy. Importantly, our access to rapidly deployable capital means we can accelerate the pace of development without relying on the federal cash grant.”

At the 60-acre site, SunPower designed and installed the SunPower Oasis(TM) system using high-efficiency SunPower solar panels with the SunPower® T0 Tracker system. The Tracker follows the sun’s movement during the day, increasing sunlight capture by up to 25 percent over conventional fixed-tilt systems, while significantly reducing land use requirements. The 9.8MW array was commissioned Dec. 30, 2011.

“SunPower’s proven T0 Tracker delivers the highest energy production per acre for solar power plants, reliably maximizing savings on electricity costs for the next 20 years or more,” said Howard Wenger, SunPower president. “We applaud the serious commitment made by Campbell and its development partners, which will deliver long-term financial and environmental benefits.”

The solar project in Napoleon is the latest step in Campbell’s journey to supporting renewable energy development. By 2020, Campbell aims to reduce energy use by 35 percent per ton of product produced and source 40 percent of the energy used by the company from renewable or alternative energy sources.