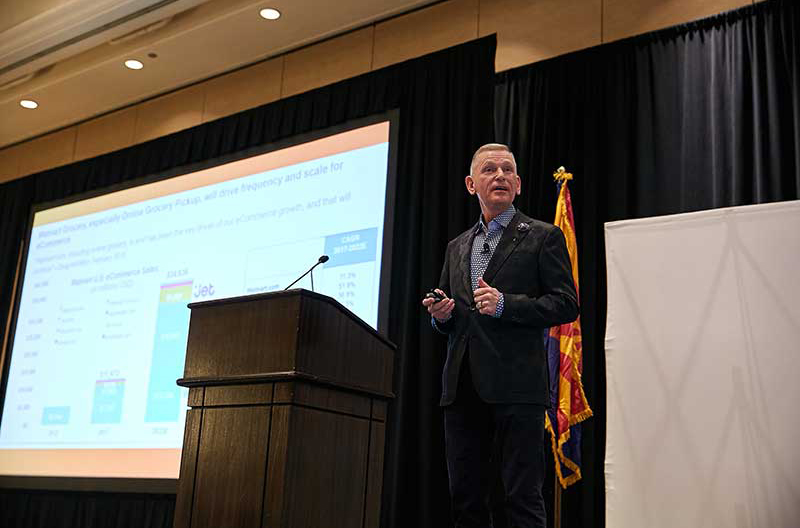 Affiliated Foods President and CEO Randy Arceneaux, the current chairman of ROFDA, said asking a retailer to speak at the organization’s fall conference was “one of the beautiful things that we started a few years ago. They’re the true heroes of our business, especially independent operators.”

Associated Wholesale Grocers (AWG) President and CEO David Smith introduced this year’s retailer/hero Kim Eskew, president, CEO and chairman of Harps Food Stores. Smith said the chain is known “not only for the stores it runs but also for its reputation. They have a culture that is extraordinary. They are probably some of the most honest, hardworking and transparent retailers around, and they run fantastic stores.”

Eskew began his ROFDA address by saying how blessed he is to be in the position he is in with Harps. He has been with the Springdale, Arkansas-based, employee-owned company for 41 years.

He joked that “it seems like it happened quickly, but I’m not an overnight sensation.”

Eskew shared with ROFDA attendees a 1982 photo of him with Gerald Harp, one of the owners of the chain at that time, cutting the ribbon on the first store Eskew managed in Fort Smith, Arkansas.

Harvard and Floy Harp established Harps Cash Grocery in 1930. The family shepherded the chain until 2001, when Harps became employee-owned through an employee stock ownership plan (ESOP). Had the company not become employee-owned, Eskew would not be in the position he is today; the role would have been taken over by a family member.

The decision to become an ESOP not only changed Eskew’s life, but the lives of many Harps employees. The results of an annual valuation of the retailer’s stock are revealed each year around Thanksgiving. Back in 2001, a share of Harps stock was valued at $27.90. For 2018, each share is valued at $445.40. As AWG’s Smith pointed out, that is a 1,544 percent increase.

“The valuation process is a bit convoluted, so it’s a little hard sometimes to know what’s going to happen, but all the people that just retired—cha-ching for you,” Eskew said. “For those people who have been with us since 2001, you know what that means to them? I haven’t done the math since we got the new stock price, but I’m going to estimate that, depending on what you were making in 2001, you’re going to have about 10 times that in your ESOP account.”

It gives Harps employees the ability to retire comfortably with the sum that most financial planners suggest is needed to maintain one’s lifestyle in retirement.

“Having a company that gives back and engages with their employee-owners and makes them part of the company like that is extraordinary,” Smith said. “It’s an important part of their culture. That’s a part of the ownership and entrepreneurship of every single employee within Harps.”

The impressive growth in the value of the stock did not come easy. Eskew said there were many obstacles to overcome, including Walmart’s growth spurt that began in the mid-1990s. The first Walmart Supercenter, complete with a grocery department, opened in Washington, Missouri, in 1988, and the format would radically change the national grocery landscape. By 1995, Walmart had 239 supercenters and a presence in each of the 50 states. Hundreds more would open during that decade, and discount stores were converted in order to sell food. The impact certainly was felt in Walmart’s home state of Arkansas.

“There were several years that we absorbed up to 20 Walmart store openings in markets where we have stores. They were throwing out stores sometimes faster than we could keep up with them,” Eskew said.

The Harps Food Stores’ home office is located just 17 miles away from the headquarters of Walmart, the largest private-sector employer in the world. In Arkansas, Walmart is a big deal.

More than 50,000 people in the state work for Walmart. The retailer has donated $83.7 million in cash and in-kind donations to charities in its home state, or $27.72 for every person living in Arkansas, Eskew said. A Walmart employee is on the board of every charitable organization operating in the state.

“The truth is people forget who we are maybe, because they’ll come to us and say, ‘we would like a million-dollar donation.’ Well, that’s a crazy number for us. But for Walmart, it’s normal, so they are used to that,” Eskew said. “Every now and then you just want to pass out and fall out of your seat. If we gave the same percent of our sales that a million dollars represents of Walmart sales, that would be about a dollar.

“I’m just saying Walmart is a big deal,” he added. “A lot of people like Walmart where we live, and so doing business there is a little different because we need their folks to shop with us.”

For independents, getting into e-commerce has been a struggle and often fiscally out of reach. Eskew cited Nielsen data released in June that showed a 3.47 percent increase in total sales of fast-moving consumer goods/fresh foods at outlets such as grocery and drug stores, select dollar and club stores and mass merchandisers, among others. Most independent grocers, including Harps, did not see a similar increase because most of that growth was in the e-commerce channel.

“This is not being driven by independents. A lot of independents are either late to the party or just getting to the party,” Eskew said. “The increase is probably largely from Walmart, Kroger, those folks—and some Amazon, although I’m not sure how much of that is really Amazon.”

E-commerce growth can look significant on paper, but it depends on the source of the information and widely varies from one market to the next, he said.

Walmart has predicted that 60 percent of its growth in the next five years will be from online sales. Eskew said the numbers get confusing because the Bentonville-based retailer refers to its click-and-collect service as “Walmart Grocery,” which is rolling out at a good clip—about 1,000 stores a year.

“For the next four years, they might be able to sustain what seems to be great growth,” Eskew said. “A lot of that is probably going to be because Walmart is just adding more stores—but they count that as same-store sales. Sometimes they count it as their online sales as well. If you take those two segments and add them together, the numbers don’t always add up.”

Walmart doesn’t charge for its click-and-collect pickup service. Eskew said that if it costs the world’s largest retailer an additional $4 in labor for each online order and, using “only” the 600,000 and 700,000 weekly transactions that Harps itself conducts to calculate the cost, that would come to about $2.5 million a week.

“You’d be out of business overnight,” Eskew said. “At some point, you’ve got to charge what it costs to do this, and I don’t know when that’s going to happen for Walmart.”

Walmart also has begun offering delivery in about 100 markets, including, as of late October, areas where Harps operates stores.

“We tried to beat them, but they beat us by a little,” Eskew said. “We rolled out Instacart to 12 locations to test and work out the kinks before we roll it out to 50 of our locations. It is our first foray with delivery, and we’re going to work on click and collect a little later—maybe a year from now—and roll that out.”

Harps can take the slow and steady approach because, first, it does not have the impetus of a head-on battle with Amazon like Walmart has and, second, the average household income of a Walmart click-and-collect shopper is $85,000, which is well above that of the majority of Arkansas households.

Meanwhile, Amazon has not found great success with online grocery sales. In 2012, about 4.2 percent of its customers regularly purchased groceries online. By 2016, that had grown just to 4.6 percent.

“Despite all this noise about how it was growing, the truth was Amazon hadn’t really been able to move that needle a whole lot—and that was prior to its purchase of Whole Foods, which made me think they’re determining that they’ve got to get a little brick and mortar in the game in order to grow this segment of their business,” Eskew said.

Other strong competition is coming from dollar format chains. Harps competes with 334 Dollar General stores in the markets where it operates. Eskew said if they’re averaging $31,000 a week in sales, that impact is more than $10 million. Not only have dollar formats been busy building more stores, they still are seeing growth in store visits, including more affluent shoppers.

Smaller stores and what’s a 10Box?

Harps was building new stores even as Walmart’s massive supercenters began to populate markets across the U.S. If Walmart built a supercenter across from a 60,000- or 65,000-s.f. store, the smaller one would struggle to survive, Eskew said. So, Harps began building smaller stores in key locations rather than single large supermarkets.

The most common Harps store size is about 32,000 s.f. Harps stores typically feature a bakery/deli as well as a convenience kiosk with gas pumps. More than 30 stores also have pharmacies.

Harps is a member of Associated Wholesale Grocers (AWG), which has championed the Cash Saver cost-plus 10 percent concept. When Harps decided to give the format a try, it wanted a unique and catchy name for the concept and decided on 10Box.

“I had a guy who said, ‘I thought this was a home improvement store, but I came in.’ He was buying groceries, so it worked,” Eskew said. “We even have a mascot called Mr. Squiggles that is on top of all of our 10Box stores.”

In August of 2018, Harps acquired a Warehouse Market in Claremore, Oklahoma, to convert to the 10Box Cost Plus. It opened on Nov. 14.

As part of one 10Box opening celebration, Eskew said the company ran a $2.97 per pound special on whole ribeyes and sold nearly 35,000 pounds of them.