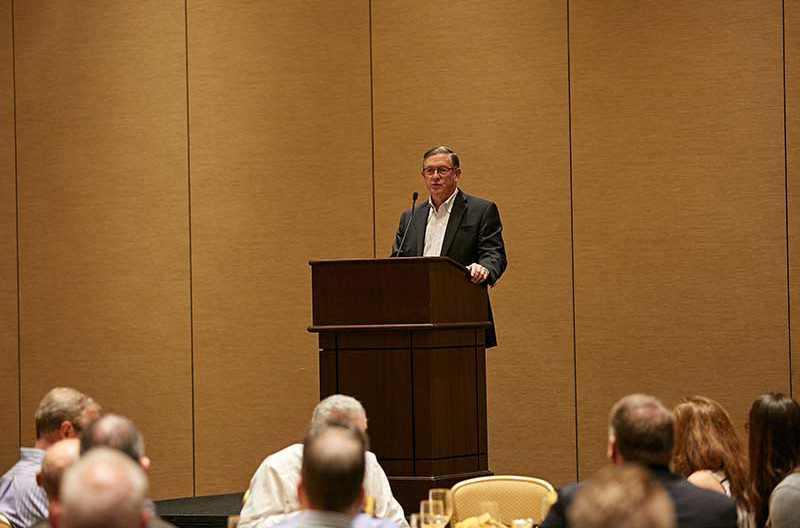 The 2018 mid-term elections changed the makeup of Congress, with 100 new members who took office in January. National Grocers Association (NGA) President Peter Larkin told the grocers in attendance at the November 2018 ROFDA Fall Conference in Arizona to invite these new members to their stores and talk about the issues impacting them on a daily basis.

“With 100 new members of Congress who haven’t had to deal with any issues, let alone our industry issues, now is the time to forge those relationships,” he said.

Larkin noted the diversity of the new Congress is much stronger than before, including the fact of many more women being elected than in the past.

He said NGA’s Political Action Committee supported more than 50 candidates who were supportive of the association’s issues. Of those candidates, 87 percent were re-elected.

“It’s probably 60-40 in terms of our Republican to Democratic support. It doesn’t matter what the party is, as long as they’re supportive of us and the issues that are important to us,” Larkin said. “As a result of that, we have some very, very strong relationships with some of the new leadership that will be coming in.”

Larkin spoke of issues of concern to the industry in the lame duck session of Congress.

“When they wrote the tax reform bill, there was a comma, believe it or not, that was put in the wrong place that ended up disadvantaging retailers in terms of their ability to take 100 percent depreciation on new equipment,” he said. “We have a chance to fix that glitch in the lame duck session. We think there’s maybe a 60-40 chance of getting that done. If not, I’m fairly confident we can get it done early next year and it would be retroactive to 2018.”

In what has come to be an accurate prediction, Larkin also mentioned watching for the possibility of a government shutdown, as a portion of the government was only funded through Dec. 9.

“This is where you’re going to see the fight over the border wall,” he said of the Republicans who are coming back for the lame duck session and the president. “We’ll see how much they are willing to go to the brink and shut down the government if they don’t get the funds for the border wall. So watch that one carefully.”

Issues expected to be addressed:

Larkin said with changes in the House, the next Congress should take action on paid family leave.

“Both the Republicans and the Democrats are supportive of paid family leave and both have provisions to do so; the only difference between the two are the length of the leave and how it’s going to be paid for,” Larkin said. “Democrats are more supportive of the employers paying for it. Republicans are saying that people ought to be able to take their paid leave but use their Social Security benefits early to be able to fund that. We’ll probably see some movement to compromise in that arena.”

He also predicted there would be activity on the issue of minimum wage.

“Although, to be honest with you, minimum wage has devolved into much more of a state and local issue,” Larkin said, adding that many states and municipalities already have raised their minimums way above the federal rate. “So whether or not that has much of an impact on our industry remains to be seen.”

On the issue of reforms to payment systems, Larkin noted that Maxine Waters will be the new chair of the House Financial Services Committee.

“She is much more amenable to and in sync with our views about reforms to the payment systems; for example, loosening up some of the rules allowing us to have PIN and credit transactions as a more secure transaction and the ability to route transactions in a much more economical way for retailers,” he said. “And really what we want is a seat at the table with these organizations that are setting the rules. So we’ll see where that goes, but I think we will have at least a chance of getting some progress there.”

Larkin said a much-talked-about infrastructure bill could be very important to the grocery industry.

“Within that bill, it’s not only roads and bridges but making the distribution of food more economical and efficient,” he said. “It really comes down to our ability to get changes to trucking rules, hours of service and training programs for new truck drivers. A lot of things will be wrapped up in that effort.”

Larkin said that is one of the things the Democrats already have said they are willing to work with the president on to “see if they can accomplish something good.”

“Former Transportation Secretary Ray LaHood just came out urging the president to support a modest increase in the gas tax to be able to fund that, so we’ll see how that goes,” Larkin said.

Health care is another area where there may be some cooperation between Congress and the president, Larkin said, particularly in the area of reducing costs of prescription drugs.

“If that happens, we have an issue that is kind of a complication that is called DIR (Direct and Indirect Remuneration) fees,” he said. “These are fees that pharmacy benefit managers are charging back to retailers and pharmacies and they’re uncontrollable and they’re done after the fact…If we get prescription drug cost legislation moving in Congress, we think we’ve got a good chance in dealing with the DIR fees as a result of that.”

On the issue of trade and regulations, Larkin said he thought most people in the grocery industry would agree that over the last two years they have been successful in rolling back some regulations that have been harmful to the industry.

“We’re going to have to watch very carefully to see if that battle is rejoined in terms in putting some of them back,” he said. “Although with a Republican majority of the Senate and the president in the White House, I think that’s an uphill climb, and even many of the Democrats are not going to want to refight those fights. So we shall see.”

Larkin cited immigration as a “big, big, big theme in this election. And I think both sides understand that our system is about as broken as broken can be.”

He mentioned a general immigration reform bill proposed a few years ago by a bipartisan group in the Senate, the Gang of Eight. The bill “passed the Senate, languished in the House and never went any further, but that could be the blueprint for us finally dealing with this issue.”

“Am I optimistic? I should be because all the factors are there,” Larkin said. “But we’re going to have to see how quickly this election devolves into the backbiting, name-calling stagnation we have seen over the last several years… We’ll just have to watch and see how that goes.”

The new House will be made up of more conservatives on the Republican side and more liberals on the Democratic said, Larkin said.

“Does that bode well for cooperation? Theoretically, no, but hopefully good sense will prevail,” he said.