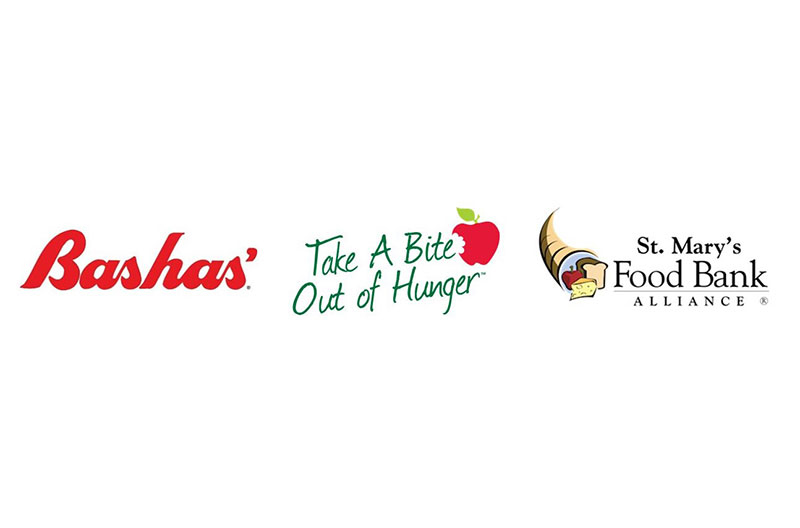 Arizona-based Bashas’ supermarkets and FirstFruits Marketing donated about 16,000 pounds of apples to St. Mary’s Food Bank in Phoenix May 8. The donation is part of a “Take a Bite Out of Hunger” give-back campaign.

FirstFruits Marketing created the Take a Bite out of Hunger campaign to help feed the underserved while bringing attention to the problem of food insecurity in the United States and Canada. This is the second year that Arizona’s hometown grocer has participated in the campaign. Bashas’ earned the donation—the equivalent of about eight pallets of apples—based on the number of apples it sold in stores across the state during the first quarter of 2019.

“Participating in the Take a Bite Out of Hunger campaign allows us to make a meaningful difference in our community,” said Edward “Trey” Basha, president and CEO of Bashas’ Family of Stores. “This donation of more than 16,000 pounds of apples helps put a sizable quantity of fresh, nutritious produce into the hands of Arizonans who need help.”

Hunger isn’t just about being hungry. It’s about food insecurity, or not having regular access to safe, affordable and nutritious foods. In Arizona, as many as one in seven people struggle with hunger, and the number of hungry children is higher yet. About one in four Arizona children—more than 370,000 youth—experience hunger or food insecurity.

“Partners like Bashas’ and FirstFruits play an essential role in our mission to feed hungry Arizonans,” said Tom Kertis, president and CEO of St. Mary’s Food Bank. “The fresh produce we are receiving through the Take a Bite Out of Hunger campaign will directly benefit hundreds of Arizona families.”

“Local grocers like Bashas’ have a deep commitment to their community; they help bring this campaign to life,” said Tim Corkill, regional marketing manager of FirstFruits Marketing. “With the partnerships we have created from coast to coast, we’re able to make a true impact while also helping raise awareness about the important issue of food insecurity.”
Bashas’ Family of Stores—a family-owned grocer that operates Food City, AJ’s Fine Foods, Eddie’s Country Store, and both Bashas’ and Bashas’ Diné supermarkets—is an Arizona-based company founded by brothers Ike and Eddie Basha Sr. With more than 100 grocery stores, it is one of the largest employers in the state and one of the Best Places to Work in Arizona. Since the company’s inception in 1932, Bashas’ has given back more than $100 million to the communities it serves.