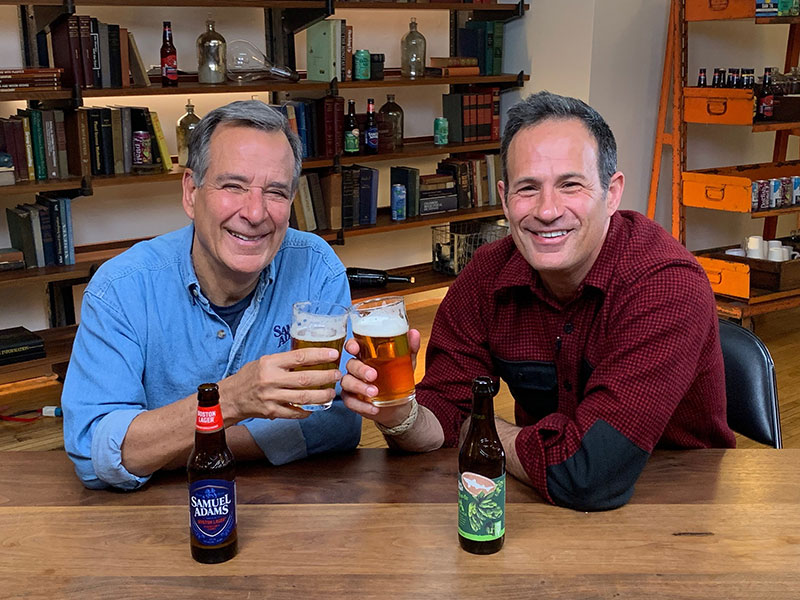 Together, the companies will create an American-owned platform for craft beer that has more than half a century of craft brewing expertise; a balanced portfolio of beer and “beyond beer” brands; and industry leadership in innovation and quality, they say, adding that following the transaction, the combined company will have “a leading position in the high end of the U.S. beer market, bringing together Boston Beer’s craft beer portfolio and top-ranked sales team with Dogfish Head’s portfolio of IPA and session sour brands.”

The combined company will, however, maintain its status as an independent craft brewery as defined by the Brewers Association. Yet it will be better positioned to compete against the global beer conglomerates within the craft beer category that are 50 to 100 times its size, while still representing less than 2 percent of beer sold in the U.S.

Koch and Calagione will continue to lead brewing innovation for the newly combined company, according to the press release announcing the deal.

Sam and Mariah Calagione, Dogfish Head’s two co-founders, have elected to take substantially all of their merger consideration in the form of Boston Beer stock and will collectively become the largest non-institutional shareholders behind Jim Koch following the close of the transaction. Sam Calagione will join Boston Beer’s board of directors and Dogfish Head’s staff will join the Boston Beer team and continue to be heavily involved in beer and “beyond-beer” projects, as the companies expand opportunities for future innovation.

“We believe we are creating the most dynamic and diverse American-owned platform for craft beer and beyond,” said Koch. “Dogfish Head has a proud history as a craft beer pioneer with a brand that is beloved by American consumers and highly respected by the industry. Sam and I have stood shoulder to shoulder in some of the defining efforts in craft brewing including the creation of the Brewers Association, the craft beer definition, the craft brewer seal and the creation of the Savor food and beer event. This combination is the right fit as both Boston Beer and Dogfish Head have a passion for brewing and innovation; we share the same values, and we will learn a lot from each other as we continue to invest in the high-end beer category. I am very happy that Sam will join the board of directors at Boston Beer. He is a tremendous friend, innovator and brewer, and I could not be more excited to work together with him for many years to come.”

“Not only are Dogfish Head and Boston Beer two original American breweries, but Jim Koch and I worked hard with other leading craft brewery founders and the Brewers Association to develop and champion what defines independent American brewers,” said Calagione. “This merger better positions Dogfish Head and our co-workers to continue growing within this definition for many years to come. In fact, Mariah and I believe so much in the future of our merged companies that we are all in, and personally we’re reinvesting nearly all of the proceeds back into the combined entity. We’re also proud to announce that we intend to devote a percentage of the Boston Beer stock that we receive to establishing a foundation and funding various local charitable programs.”

The combined company will be led by Boston Beer CEO Dave Burwick, who said, “This is a formidable combination of brands, incredible brewing talent and leaders who remain 100 percent focused and committed to the long-term health of our breweries and growing the beer industry. United, we will have the highest quality, most distinct, high-end portfolio from both a price-point and product perspective with the top-ranked sales organization to bring it to market. We expect that we’ll see more consolidation in the craft industry over time, and we’ll be in the best position to take advantage of those changes.”

The transaction is expected to close late in the second quarter, subject to customary closing conditions. Calagione and his family will receive approximately 406,000 shares of Boston Beer stock based on a share price of $314.60. Dogfish Head shareholders will also receive $173 million in cash, most all of which is for the benefit of Dogfish Head’s financial investors, with the exception of certain transaction-related expenses.

Boston Beer expects that its current cash on hand and available line of credit will be more than sufficient to fund the cash component of the transaction. It is expected that Calagione will join Boston Beer’s board of directors beginning in 2020.

Dogfish Head employs approximately 400 employees, produces most of its beer at its brewery in Milton, Delaware, and sells its beer in more than 40 states. Boston Beer plans to consolidate Dogfish Head results into Boston Beer’s financial results beginning late in the second quarter of 2019, and Boston Beer currently estimates that the transaction will be neutral to slightly accretive in 2019 and will not have a material impact on full-year 2019 earnings per diluted share.