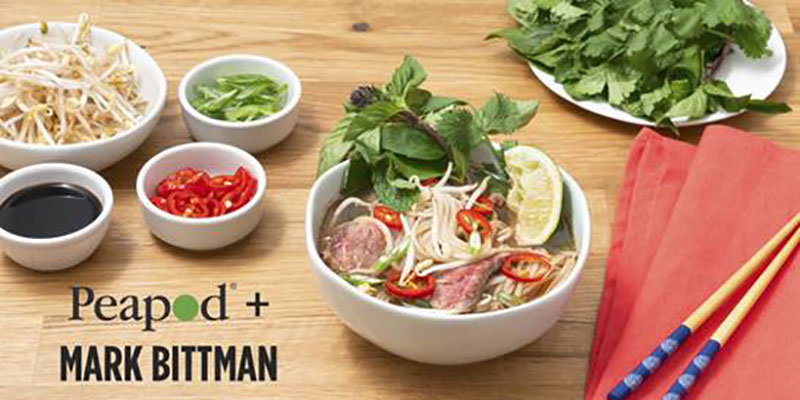 Chicago-based Peapod has a new meal kit collaboration with Mark Bittman, one of the country’s best-known, most prolific food writers.

Peapod is making it easy for customers to get some of Bittman’s newest meals on the table by highlighting several of his new cookbook’s recipes in shoppable, click-to-cart format recipes as well as an exclusive meal kit, Fast Pho, a Vietnamese inspired dish which features pre-measured, fresh ingredients.

Peapod began offering meal kits in 2014 as one of the first retailers to combine the convenience of meal kits with online grocery delivery. The introduction of Bittman’s meal kit comes as Peapod’s annual meal planning forecast stated that 77 percent of Americans say they would rather eat a homemade meal than go out for dinner. And more than 40 percent of Americans value meal kits as a tool to make cooking at home simpler.

In addition to this meal kit, Peapod shoppers can also find four new recipes from “Dinner for Everyone: 100 Iconic Dishes Made Three Ways,” Mark’s new cookbook, on Peapod.com, all of which are shoppable. With one click, customers can fill their Peapod carts with all ingredients.

According to the author’s website: “Mark Bittman is the author of 20 books, including the How to Cook Everything series, the award-winning Food Matters, and The New York Times number-one bestseller, VB6: Eat Vegan Before 6:00. For more than two decades his stories appeared in the Times, where he was ultimately the lead food writer for the Sunday Magazine and became the country’s first food-focused Op-Ed columnist for a major news publication. He has written for nearly every major newspaper in the United States and many magazines, and has spoken at dozens of universities and conferences; his 2007 TED talk has more than a million views. He was a distinguished fellow at the University of California (Berkeley) and a fellow at the Union of Concerned Scientists; he is a member of the faculty of Columbia University’s Mailman School of Public Health.”