Gov. Phil Murphy presented his budget proposal for Fiscal Year 2021 to the New Jersey Legislature last month, and we continue to be amazed at how harsh the repercussions could be on NJ consumers and business without any solutions to solve NJ’s property and income tax burdens or affordability crisis. His $40.8 billion proposed budget is the largest budget proposed in state history and includes a surplus of $1.6 billion and $300 million allocated to the State’s Rainy Day Fund.

There is no property tax relief for residents who pay the highest in the nation. The governor’s priorities include a $4.9 billion contribution to the pension system, chooses winners and losers in school aid, some funding for the broken NJ Transit system and an increase in the Earned Income Tax Credit. This proposal continues to call for more taxes, including a Corporate Responsibility Fee, a cigarette tax increase and an income tax increase.

Here are some of Gov. Murphy’s proposed budget recommendations that will impose a significant burden on residents and business if approved by June 30:

As you may recall, the governor proposed this tax during the last budget cycle. NJFC formed and led a coalition of business trade groups and other stakeholders in opposition to this tax increase, meeting with numerous legislators over the course of several months to educate them on the significant and detrimental impact of this proposed tax. If enacted, this tax would have fallen disproportionately on our industry and members, and we were pleased this new tax was ultimately not included in the final budget. We will be reconvening the coalition and commencing meetings again on this issue.

This proposal is harmful to NJFC member companies which operate as pass-thru entities. NJFC will be conveying our opposition to this proposal. This is the third time Gov. Murphy has asked the Legislature to approve an income tax increase.

Legislative leadership has previously rejected an income tax increase, however, recently Senate President Sweeney said that he could accept a millionaire’s tax increase if the governor is willing to make an additional $1 billion contribution to the public pension system.

The Senate President has also proposed an increase in the Corporate Business Tax to fund NJ Transit improvements. Assembly Speaker Coughlin has said he is cautious about raising broad based taxes.

NJFC will continue to analyze this proposal and advocate for our members during budget negotiations over the coming months. By State Constitution, the state budget needs to be approved by the New Jersey Legislature and signed into law by June 30, the end of the fiscal year. It is important for industry to become engaged on these issues and take action to help combat these extremely onerous proposed tax increases. 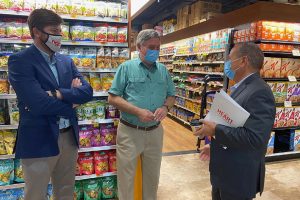