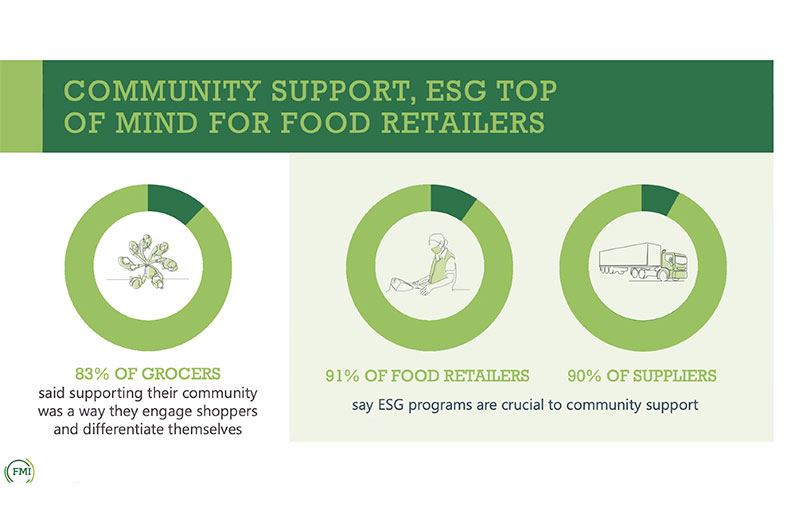 “A major trend that has emerged from the pandemic is shoppers are looking for fresher, healthier, more convenient options at their grocery store,” said Leslie Sarasin, president and CEO of FMI. “Food retailers have absorbed this feedback and are making great strides to create both online and in-person shopping destinations that cater to shoppers’ evolving tastes.”

Despite the macroeconomic challenges, a majority of retailers (61 percent) pointed to a positive impact on business sales and profits in 2021 from local and national economies.

On the other hand, food suppliers – surveyed for the first time in the 74-year history of the Speaks report – were less upbeat (50 percent positive, 36 percent negative). Retailers and suppliers agree that the current economic climate will not be as favorable, with both segments anticipating that inflation will cause operating costs to increase (78 percent retailers, 90 percent suppliers).

The survey showed that shoppers in August reported spending an average of $136 a week on groceries, down from $148 a week in February of this year, Sarasin said. It also reported that two thirds of shoppers said they’re spending more on groceries than they did a year ago, which may indicate they are buying less because of higher prices.

“Even an industry known for its customer service needs a periodic reminder to pay attention to emerging consumer behaviors,” Sarasin said. “And the past few years have brought us back to this foundational principle of the way we function as an industry.

“We’ve seen a revitalized energy among our retailers in getting their differentiation strategies informed by and in sync with the latest consumer behaviors and trends.”

Mark Baum, chief collaboration officer for FMI, noted that as a result of shifting consumer behavior during the pandemic, 91 percent of all retailers offer online sales and nearly half of those saw online increases in 2021.

About 20 percent of those same retailers are expecting their online sales to increase again this year, although many saw a dramatic e-commerce increase “during the throes of the pandemic,” he said.

To accommodate the shift in shopping behavior, “retailers have evolved their delivery models and service differentiation strategies,” Baum said. “Almost 90 percent of all retailers now offer store or curbside pickup for online ordering, and 56 percent offer home delivery either via third parties and 34 percent are using their own employees for those same sets of services.”

To meet the increased e-commerce demand, food retailers also are shifting their labor allocation, he said, with 52 percent saying they are doing so to support online purchase fulfillment. Forty-eight percent are increasing staffing for inside store fulfillment and curbside pickup and 32 percent are offering more workers for home delivery.

“Despite the growth of e-commerce use and sales, many grocers are still trying to crack the code of online grocery shopping,” Baum said. “There’s a lot of headroom in terms of being able to improve e-commerce operations and the overall operating model.”

Andrew Harig, VP of tax, trade, sustainability and policy development for FMI, said swipe fees have “increased exponentially in recent years.” Merchants’ card processing fees totaled $137.8 billion in 2021. That’s an increase of 25 percent from previous years and more than double from the previous decade, according to Nielsen data.

According to Sarasin, consumers’ own health goals also have been driving business growth for retailers. A major trend that has emerged from the pandemic is that shoppers who are looking for “fresher, healthier, more convenient options are spending more time in their grocery stores,” she said. As a result, food retailers are trying to separate themselves from their competitors with product differentiation strategies.

This includes 90 percent expanding local assortments throughout the store, and 81 percent product innovation and new item introductions. Eighty-one percent of those surveyed said they are enhancing the storewide organic assortment to better engage customers and to serve their needs and those of their families, Sarasin said.

Many grocers, 75 percent, also are offering fresh prepared foodservice programs and 82 percent of those are increasing the space allocated for fresh grab-and-go type products. Also, 64 percent are expanding space allocation for plant-based foods and 70 percent said they are expanding their fresh produce department.

The rapid adoption of technology continues to be a key component in helping food retailers and their suppliers overcome many of the challenges posed by COVID-19, Baum said.

About three quarters of food retailers are continuing to invest in and experiment with technologies “to both improve customer experience and also enhance business efficiencies.

“The same percentage of suppliers also said their tech investments last year had a positive impact on profit margins,” he said.

A lower number, about 39 percent, were less optimistic about the short-term impacts of tech investments.

Among the areas seeing a “big technology makeover” include tech to personalize shoppers’ experiences to enhance foodservice ordering and delivery, and tech that allows for dynamic pricing, product traceability and especially around mobile checkout systems to make checking out faster and more frictionless.

He noted that food suppliers are more likely than retailers to have embraced technologies such as advanced data analytics and AI and machine learning for price optimization, assortment planning and supply chain logistics.

While technology is important to the way food retailers are operating, Sarasin said ultimately “the retail business is about people and about serving communities.”

“While inflation is a cause for concern for the food industry, it is much more concerning for American families who work hard to put food on their tables,” she said. “The food industry is committed to addressing these challenges so we can support families in the communities in which we operate by providing access to healthy and affordable foods.”