For the past three years, Heat Seal and Kroger have been working together on their Energy Smart™ Wrapper project. 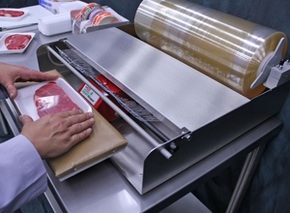 With its patent pending, on-demand sealing technology, the Energy Smart Wrapper ensures that energy is consumed by the film seal plate only when store associates need to seal a package. The new units, which will become fully available sometime in 2013, provide significant energy conservation by no longer requiring the seal plate to be energized throughout the day. The Energy Smart Wrapper also maintains levels of productivity seen with the old-style wrappers.

The Energy Smart Wrapper was tested in markets across the United States and has logged 75 to 80 percent less electricity than old-style stretch film overwrappers, saving Kroger more than $1.5 million per year.

“We have enjoyed the opportunity to collaborate with Kroger on this innovative new technology,” Ron Zieske, president and CEO of Heat Seal LLC, said. “We are excited about the Energy Smart Wrapper and the opportunity it creates in providing significant energy conservation throughout North America.”

Test units were installed in 2011 and monitored for six months. Actual energy conservation was more than 75 percent, compared to old-style units. Heat Seal has since increased its production to meet Kroger’s needs for the new wrapper. Kroger currently is in the process of replacing its old-style units throughout all of it store brands.

Since 2000, Kroger has reduced energy consumption by more than 30 percent. The company recently received recognition for its efforts with the top award for Energy Efficiency, from The Alliance to Save Energy 2012, which was in part from the Energy Smart Wrapper and Kroger’s LED projects in their stores.

Those interested in the Energy Smart Wrapper can contact Heat Seal regarding the education and commercialization process and to evaluate their application needs.