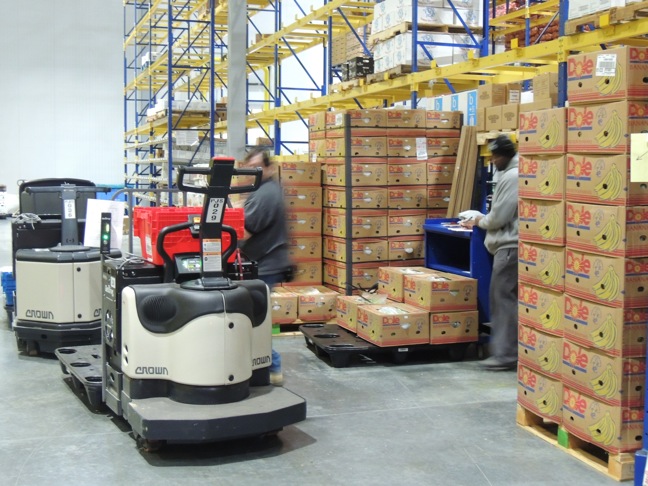 Associated Wholesale Grocers’ (AWG) newest division has been in business for just six months, but already it’s making a big impression on independent retailers in the Gulf Coast region.

David Smith, SVP and Gulf Coast Division manager for AWG, reports that the wholesaler’s “little operation in the swamp” has exceeded expectations since it opened in Pearl River, La., in mid-January.

“We’ve surpassed all of our productivity and accuracy expectations as far as shipping product and ­getting things out,” Smith tells The Shelby Report.

“We did a lot of planning and testing last fall to prepare for opening down here,” he adds. “It has gone much, much better than we ever dreamed. We, of course, prepared for the worst and were pleasantly surprised with the way things started and also with the quality of employees we have.”

“We’ve been around 87, going on 88, years, and we’ve grown from one warehouse in Kansas City,” Smith says. “But we’ve never gone into a new area and built a new facility. We’ve always started out with a warehouse that somebody else had that we picked up and we’ve replaced them through time, but we’ve never gone into an area where we weren’t and built an all-new facility and an all-new workforce.”

“It’s a larger facility than normal in that we built it 45 feet clear—so it’s 45 feet tall vs. our typical facility, which is 32 feet. And instead of having five pallet positions high, we have nine pallet positions high throughout the entire facility. It gives us a lot more storage capacity, and we think that’s really going to pay off for us in the long run—giving us more variety and the ability to store products down here and to keep prices low for our member stores.”

The warehouse and distribution facility is expandable to 1 million s.f.

In addition to the company’s associates, Smith attributes the majority of the new division’s early success to its independent member retailers.

“We were blessed by having retailers that wanted to become a part of our co-op,” Smith says. (Prior to the new division opening) “we were hauling groceries 500 miles (from Memphis and Nashville, Tenn.). It was a long, long trip. But those members, they wanted to be a part of our cooperative, and they knew that if they would stay with us, we would grow to the point that we would be able to have them a warehouse of their own. And we made it, together. And we gained business and never lost a single member. We’ve done nothing but go forward from that point.”

It’s that spirit, Smith points out, that shows the value of working together as a cooperative.

“That’s what gave us the chance to come down here,” he says. “It wasn’t anything I or our management team did; it was our members. They had the determination and the willpower and they said ‘we know if we get behind this we can make it work’ and they did.

“We’ve got them a wonderful facility here,” Smith says. “We’ve got a lot of growth potential. We’ve already got a number of new stores.”

In fact, AWG is slated to open seven more stores by the end of the year—“stores that are under construction, that we have for our members,” Smith says.

“This (new division) was a game changer for them,” he says. “Their cost of goods, for many of them, dropped as much as 2 percent, and in a business where the average margin is around 1 percent net profit. Having their cost of goods drop that much, it gave them the capital to reinvest in their companies and to go out and seek new locations. It’s really spawned a lot of growth, adding additional grocery stores down here. In addition to picking up new members, people who want to come with us as a supplier—we’re opening some stores in some underserved areas, some food deserts, some areas that may have had grocery stores years ago but they went out, and they’ve really needed one but it didn’t make financial sense to do it.

“That’s exciting, too. We love to be able to give back to the communities and support our members as they go out and find new spots to run grocery stores.”

AWG’s Gulf Coast area retailers are saving approximately $5.75 million a year as a result of the new division opening.

In choosing a location for its new division, AWG had its share of choices in the Southeast. In addition to Louisiana, the company was considering sites in two other states as well, according to Smith. It was a workforce solutions program called FastStart, provided at no cost through Louisiana Economic Development, that helped solidify AWG’s decision to build in Pearl River.

FastStart works with businesses to anticipate and address a company’s workforce needs early in the startup or expansion process.

“We had three different states that we had locations in that we could build,” Smith says. “We could build in Alabama, Mississippi or Louisiana, as long as it was along the I-10 corridor. So we were talking to all three of the states and, without any disrespect whatsoever to the other states because they’re wonderful and we’re so glad we do business in both of them, Louisiana just came to us with a wonderful package of support. One of the things they brought to the table was Louisiana FastStart.”

The FastStart program put together a team of experts to document how AWG does business in its other divisions in order to get an understanding of the company’s culture.

“From that we were able to really distill how our company does business and have that (data and information) for all of our new hires,” Smith says.

“We were able to speed up the (hiring and introduction processes) so that, truly within just weeks, the employees who were here were every bit as proficient as many people would have expected them to be after years of service. And so it did, as they call it, give us a ‘fast start’ with opening.”