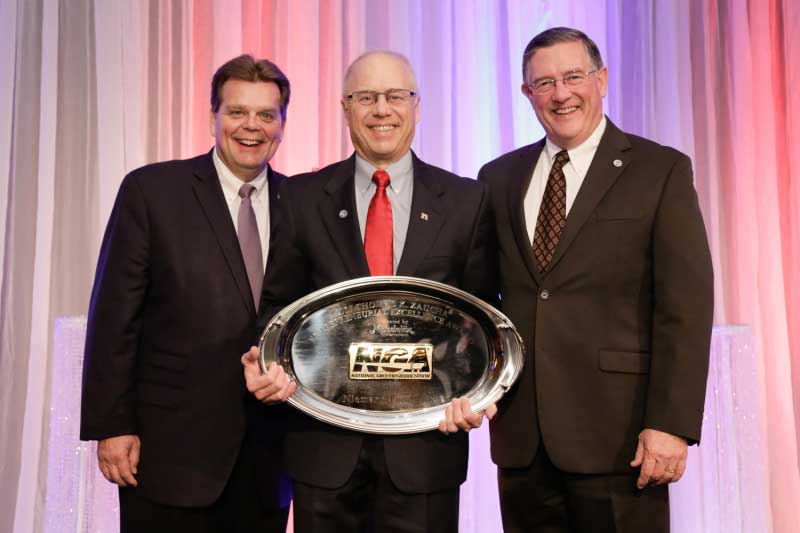 The National Grocers Association (NGA) recognized two industry leaders with top awards during the 2017 NGA Show, which kicked off Sunday in Las Vegas.

The Thomas K. Zaucha Entrepreneurial Excellence Award was presented to Rich Niemann Jr., president and CEO of Niemann Foods Inc. Niemann began his career with Niemann Foods in 1977, following his graduation from the University of Illinois. He has been the president and CEO of the company since 2005. Niemann serves on the NGA Board of Directors as the immediate past chairman and has held positions on numerous boards, including the Illinois Food Retailers Association.

“A passionate leader who has his eye always to the future, Rich is continuously inspiring others in the independent supermarket industry to find new and innovative ways to better serve their communities. NGA is proud to honor such a distinguished individual for his service and dedication to his stores, his community and our industry,” said NGA President and CEO Peter Larkin.

Since 2009, the Thomas K. Zaucha Award, presented by Mondelez International and named after NGA’s first president and CEO, has been presented annually to recognize an independent grocer who exemplifies persistence, vision and creative entrepreneurship.

The Thomas F. Wenning Pinnacle PAC Award was presented to Roger Collins, chairman of Harps Food Stores. Collins started with Harps in 1986 as VP of finance and CFO. He was promoted to EVP in 1995 and CEO in 2000. Collins stepped down as CEO in 2016 but remains chairman. He has served on both the board and executive committee of NGA, the National Cooperative Bank and Associated Wholesale Grocers, as well as the Board of Regents for the NGA Research and Education Foundation. In 2015, Collins was awarded the Thomas K. Zaucha Entrepreneurial Excellence Award by NGA.

The Thomas F. Wenning Pinnacle PAC Award was established in 2014 to honor Tom Wenning for his 40 years of service to NGA and the independent supermarket industry and is presented to an NGA member who helps advance the role and presence of the independent grocer and NGA in government and political affairs.

“The NGA Show continues to experience growth, showcasing that this event is truly the event where independents gather. We are excited to continue to build off of the momentum from previous NGA shows,” said Larkin.

Over the next few days, the show will feature more than 40 education workshops and an expo floor with more than 325 exhibitors in various categories such as produce, meat, technology, craft beers and general merchandise, as well as health, wellness and beauty product sectors.

“Year after year, the NGA team seeks to provide show attendees with an event that has them leaving with the necessary resources, tools and solutions to address shifting demands and marketplace challenges, and ultimately help them grow their bottom line,” added Larkin.

Former Speaker of the U.S. House of Representatives John Boehner was featured as the keynote speaker for the opening session, sponsored by The Kraft Heinz Co. A former small businessman, Boehner served for nearly five years as the 53rd Speaker of the House, where he led efforts for a smaller, less costly and more accountable federal government, according to NGA.

In addition to Sunday’s NGA Show events, the NGA Board of Directors, by recommendation of its nominating committee and a subsequent vote by the NGA membership, announced its 2017 board of directors, officers and executive committee members, as well as the election of eight new board members.

A full list of the NGA Board of Directors can be found here.

The NGA Research and Education Foundation on Sunday recognized scholarship recipients for the 2016-17 academic school year at a brunch in support of the NGA Foundation, sponsored by Chobani.

“The NGA Research and Education Foundation has accomplished a lot in its 25 years of service, but I know we can do more,” said Elizabeth Crocker, VP and executive director of the NGA Research and Education Foundation. “I look forward to refocusing our energy and putting more resources toward serving the foundation’s mission of recruiting, training and retaining new talent for our industry.”

Added Larkin, “It’s critically important to give back and invest in our industry’s next generation of leaders. These impressive students are our leaders of tomorrow, and we must do what we can to encourage them to enter and thrive in the independent supermarket industry.”

The mission of the NGA Foundation is to help the independent grocer attract and retail top talent, develop future leaders and become an employer of choice for college graduates. NGA says the foundation’s scholarship program would not be possible without the support and generous contributions from various partners within the independent supermarket industry.

• The Charlie and Becky Bray Scholarship was awarded to Jacob Crowell, a current student at Western Michigan University. He is pursuing a degree in food and consumer packaged goods marketing.

• The Roger Collins Scholarship was awarded to Michael Navarro, who currently is working on his degree in business/food management from Arizona State University.

• The First Data Technology Scholarship recipients are Jennifer Bell and David Rosen. Bell currently is attending the University of North Texas, where she is pursuing a degree in learning technologies, and Rosen is working on his MBA at the University of La Verne.

• The Kimberly-Clark Corp. Scholarship was awarded to Antonio Scelfo, who currently is pursuing his degree in finance from Notre Dame University.

• The Peter and Jody Larkin Scholarship was awarded to Dusty Longoria, who is working on a degree in business management from the University of North Texas.

• The Mondelez International Scholarship was awarded to Michael Standeven, a current student at the University of Texas at Dallas, where he is working on a degree in computer science.

• The Bob Richardson Scholarship was awarded to Sadie Brumfield, who is attending East Tennessee State University, pursing a degree in business.

• Victoria Conlon is pursuing her degree in marketing analytics at Vanderbilt University.

• Jason Forrester currently is attending Colorado Technical University, where he is working on his MBA.

• Kevin Halcomb is studying business administration at The King’s University.

• Crystal Siemers-Peterman is attending the University of Minnesota-Twin Cities for her degree in agriculture and food business management.

• Michelle Turner is attending the University of Missouri-Kansas City, where she is working on her MBA.

Dusty Longoria currently is pursuing a degree in business management at the University of North Texas.

The Thomas K. Zaucha Scholarship is given each year to an outstanding applicant who is pursuing a career in the grocery industry, particularly focused on the independent retailer and wholesaler sector.

• Dusty Longoria currently is pursuing a degree in business management at the University of North Texas.

• Adam Peterson is attending Western Michigan University, where he is pursuing his degree in food and consumer packaged goods marketing. 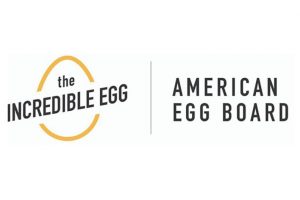 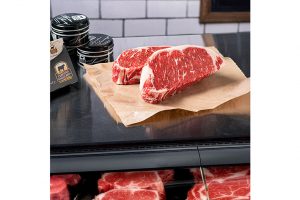