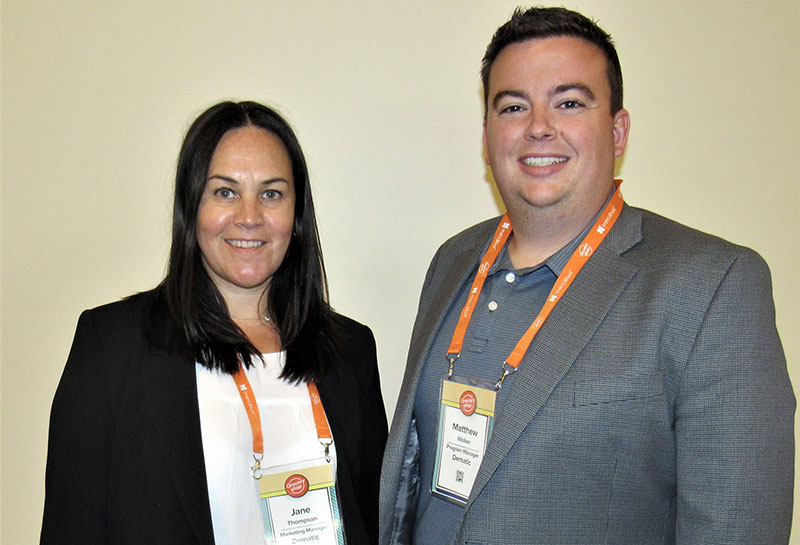 Several companies at Groceryshop talked to The Shelby Report’s Midwest VP Geoff Welch about their products and services, including Dematic, a micro-fulfillment provider.

Dematic is a warehousing and supply chain automation organization with roots in Germany. It has been around for 200 years and got its start as a small industrial machine shop producing some of the first steam-based cranes.

“Since then, we’ve kind of gone through every industrial evolution and matured into one of the most reliable and leading innovators in the intra-logistics space, and so now we’re taking that knowledge and experience into the micro-fulfillment market,” said Matt Walker, Dematic program manager.

Specifically, Dematic helps retailers solve what many say is the great challenge of the day: rapidly—and profitably—fulfilling orders for consumers. Walker called it the “tyranny of now.”

“They have a higher demand for products, a higher speed of fulfillment of those products and retailers have been struggling with understanding how can they do that,” he said.

Retailers can choose between doing it all in-house with their employees picking orders for pickup or delivery. They can partner with a third-party provider like Shipt or Instacart. Either way, retailers are experiencing a $10 to $20 net loss in their order fulfillment, according to Walker.

Third-party providers can provide great service and they tend to get the credit for it, or they can perform poorly and reflect badly on the retailer. Walker said there is “a lot of noise in the marketplace” around that quandary.

What Dematic offers the retailer is the ability to drive down costs by putting automation in the back room of a store or into an existing footprint or new addition. Dematic can automate a percentage of online orders to reduce the retailer’s cost of offering the service. That is the first of the three main parts of the micro-fulfillment solution.

Automation includes shuttles that bring the products to the picker. The Dematic automation system has SKUs in a storage retrieval system that brings the goods to the picker, instead of the picker running around the store picking items.

The second part is a fast-pick area, where promotion, high-volume or bulky items that don’t fit well with automation are located for picking. The final step is the in-store pick.

“We’re looking to automate about 80 to 85 percent of a customer’s standard 35 to 40 items in an order with the retailers only having to go out to the store to pick the remaining elements,” Walker said.

That last part still is costly, but Dematic also has a solution for that. The company has developed an application that lays out the best in-store path for picking that final portion of the order.

“We take our proprietary software and we take in the elements of the in-store order, the fast-pick order and the automation order and we consolidate those together and then allow those to be picked up by the customer or allow them to be delivered to the home using another third-party provider or a gig service,” he said.

Dematic views its solution as the next generation of hub-and-spoke supply chain network planning to get products closer to the customer. Walker believes Dematic is well-positioned to because of the years it has spent further upstream in the supply chain. It has been working with distribution centers and warehouses for decades. Some of its clients have been customers for 75 years.

“They know us. They trust us, and now we’re simply saying, ‘let us take our proven technology that is on 6,000 installation sites around the globe and put it to use in these micro-fulfillment centers,” Walker said. “Anybody who has a supply chain network, that has a distribution center, Dematic has likely at some point been involved and touched that space.”

The company plans to be around for a long time to come. In the not-too-distant future, it may even provide the picker.

“We do robotics. We have the ability to do robotic piece-picking,” Walker said. “We actually are in the process of deploying a site with one of our customers globally, and we envision that as the next step in this process is to move from human-based picking to robotics-based picking.”