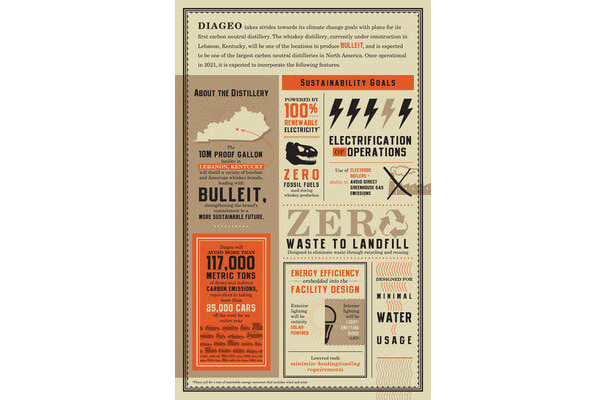 Global beverage leader Diageo announced June 29 that its new Kentucky whiskey distillery, which will distill Bulleit, is expected to be carbon neutral in efforts to combat climate change – a first for the company and one of the largest facilities of its kind in North America.

The site will be powered by 100 percent renewable electricity, with a capacity to produce up to 10 million proof gallons per year, according to the company.

The new distillery, which is under construction in Lebanon, Kentucky, reflects Diageo’s commitment tackling climate change, achieving net-zero carbon emissions and moving the company closer to its goal of sourcing 100 percent of its electricity from renewable sources by 2030.

Employing electrode boilers, the site will use a mix of renewable electricity sources to power a 72,000 square-foot distillery, dry house and warehousing facilities.

The distillery will have the capability to distill a variety of bourbon and American whiskey brands, with Bulleit the first and lead brand. The facility will supplement existing production at the Bulleit Distilling Co. in Shelbyville, Kentucky.

“As a company we know that our long-term sustainable growth depends on reducing our reliance on fossil fuels that contribute to climate change,” said Perry Jones, president of North America supply for Diageo. “This groundbreaking undertaking to electrify our operations and then power them with renewable electricity will result in one of the largest carbon neutral distilleries in North America.”

Sophie Kelly, SVP Whiskies for Diageo NA, said the company’s passion for sustainability began when it built the Bulleit Distilling Co. in Shelbyville.

“We focus on reducing carbon emissions, water conservation and waste management during production,” Kellly said. “Then, when we opened our visitor experience there, we chose to implement practices like eliminating single-use plastics from our bar and sourcing locally-grown organic cocktail garnishes from our onsite garden.

“Our commitment to the environment evolves with the Lebanon distillery, where no fossil fuels will be consumed for the production of Bulleit. This allows us to really begin to double down on our ambition to reinvent category standards.”

To achieve carbon neutrality at the site, Diageo plans to incorporate a variety of features that will avoid annual carbon emissions by more than 117,000 metric tons. It said this is the equivalent of taking more than 25,000 cars off the road for an entire year.

Once operational, the site is designed to lessen climate change with minimal use of materials and waste through reuse and recycling. In addition, any residual waste will not be sent to landfill.

“I welcome Diageo’s commitment to carbon neutrality and using renewable electric at its Bulleit distillery in Lebanon. This is a notable example of a historic Kentucky industry embracing a new future,” said Kentucky Gov. Andy Beshear.

“To continue the commonwealth’s economic recovery, attract business investment and create jobs for Kentuckians across all counties, it’s important we and our economic development partners provide a cost-competitive energy mix. Energy diversity is something more industries are considering when they choose where to locate, and offering the right mix will help us provide a brighter future for generations to come.”