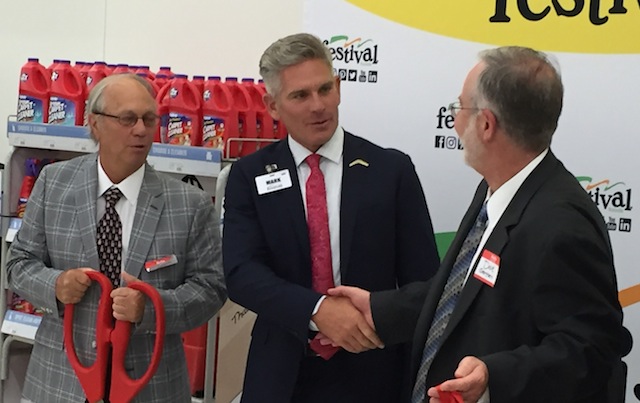 The 25th Skogen’s Festival Foods location in Wisconsin officially opened July 22 in Somers. Located at 6000 31st Street, it is the second in Kenosha County. It employs more than 250 people and is open 24 hours a day. (See a gallery of photos here.)

The store “rounds out the market” for Festival Foods, said president and CEO Mark Skogen. The family-owned company operates stores in Kenosha and Mount Pleasant, and Somers is about the midway point between the two.

“We wanted to get a little bit more of a general merchandise presence in the store and we also moved the bakery to the back of the store, which was a first time for us, and so far it looks good and hopefully our shoppers will enjoy it there,” Skogen told The Shelby Report’s Geoff Welch.

In many Festival Foods stores, the bakery is near the front entrance, but in the new store it is near the deli and meats and has become a service department.

“We thought if we had all that together, there were some synergies for it,” Skogen said.

The store also features a dining deck above the deli and a community conference room.

Shoppers at the Somers store will notice new Bemis Retail Solutions plastic grocery carts as well. Bemis is a local company based in Sheboygan Falls, and the carts are “quite a find for us, actually,” Skogen said. As it needs them, Festival Foods is replacing older carts companywide with the Bemis models.

“We had them in our refrigerator cases for quite a while, and they do give a nice, consistent light level. It’s easier to navigate through the store and it makes our products pop,” he said.

In addition, merchandising displays are as roomy as possible.

“When things look plentiful, we believe that they sell better,” Skogen said.

“It cycles through and hopefully we cement some shoppers, some mothers and fathers,” Skogen said. “Also, those kids have a good time while they’re at the grocery store as well, and maybe they’ll become our next associates.”

The store officially cut the ribbon July 22, but the store had been open for a couple of weeks prior. Skogen is happy with the attention it has drawn, but cautioned that “everyone’s going to come out and take a peek.

“It’s whether or not you have them coming back on a consistent basis, so we don’t get too excited or too concerned if sales aren’t exactly like they should be in the first couple of weeks,” he said. “I would say that it’s been the typical mode of traffic for opening, so we’re off and running.”

Festival Foods opened a store in Madison in April and recently took over ownership and operations of the Lakeside Sentry in Paddock Lake. It also opened a store in Menasha in June. The company’s 26th location will open in December in Green Bay.