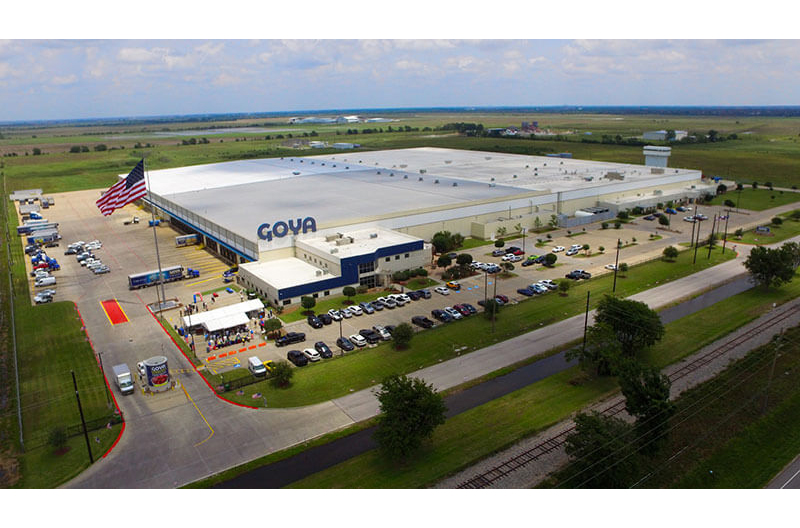 Goya Foods, America’s largest Hispanic-owned food company, commemorated Memorial Day by honoring the country’s veterans and fallen heroes. In dedication to all those who gave their lives to fight and defend our freedom, Goya flew a new 30-foot by 60-foot American flag on a 125-foot flagpole and constructed a monument at Goya’s Texas location in Brookshire.

“We owe our lives, our liberty, our prosperity and our democracy to those who made the ultimate sacrifice in order to preserve one nation under God,” said Bob Unanue, president and CEO.

Unanue and Cassandra Garcia, deputy state director for U.S. Senator Ted Cruz, honored the family of fallen soldier Marty Gonzalez and six other heroic veterans at a special event held at Goya’s Texas facility on Memorial Day. Gonzalez’s widow, Tawnee, and daughter were presented with a United States flag that flew over the U.S. Capitol. Garcia offered the flag along with a certificate recognizing USMC Sgt. Gonzalez’s service “from a grateful nation.”

• Fallen soldier USMC Sgt. Marty Gonzalez: Gonzalez was a decorated warrior who served several tours of duty and received two bronze stars and three purple hearts. He played a key role in forming the Veterans Court in Texas to help other veterans recover from PTSD. He was laid to rest with full military honors. His widow Tawnee Gonzalez and her daughter attended to accept the award. This was the first Memorial Day without him;

• USMC veteran Mark “Oz” Geist | Shadow Warrior: A U.S. Marine Corps veteran who also was a team member of the Annex Security Team that fought courageously during the attack on Benghazi, Libya. He is credited with saving 25 people;

• 93-year-old U.S. Army Sgt. Maj. Victor Lopez: Lopez was deployed several times during the Korean War and during peacetimes to Vietnam. He was a member of the 65th Infantry Regiment known as the Borinqueneers. He has earned various awards and citations for his service to our nation;

• U.S. Army Cpl. Sue Downes: Downes was deployed to Afghanistan and injured when an antitank mine hit her Humvee. She lost both her legs and her best friend in the blast. She is a single mom with two children;

• Honorable Commissioner and USMC veteran Daniel P. Cortez: Cortez served in the Vietnam War. He is one of five generations of veterans in his family to dedicate his life to serving his country; and

• USMC veteran Bill Balleza: Balleza is a former local Houston NBC affiliate anchor with 50 years on the job. Prior to his broadcasting career he served three years in the Marine Corps including 13 months in Vietnam, where he was positioned as a scout/sniper.