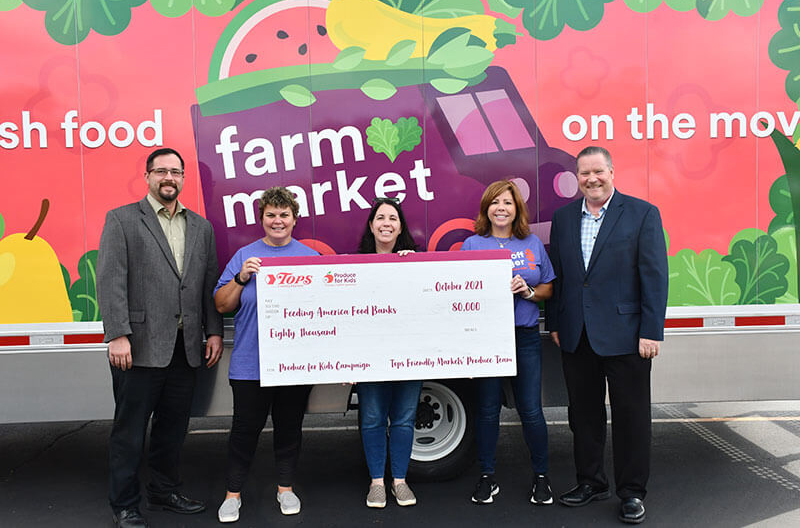 Representatives from Tops Markets, including Brandon Bentley, Kristen Hanson and Jeff Cady, along with Healthy Family Project’s Trish James, presented the FeedMore WNY food bank with a donation of 80,000 meals from the spring 2021 Tops Produce for Kids in-store cause marketing campaign.

The check was presented Oct. 1 as part of a Walk Off Hunger event in Buffalo, New York, a community awareness and fundraising event for the region supported by the food bank. The donation will be split among several food banks in the Tops geographical footprint.

“Supporting our local community through our Neighbors Helping Neighbors program is at the core of our business at Tops,” said Jeff Cady, director of produce and floral. “Through the Produce for Kids campaign we were able to educate our shoppers on the value of eating more fruits and vegetables while providing 80,000 meals to our local food banks.”

During the campaign, signage positioned near partner brands featured QR codes that led shoppers to topsmarkets.com where they found a free downloadable e-cookbook full of inspiration, tips and other great information and resources from the produce brands supporting the campaign.

In addition, the Tops produce teams wore Fruits & Veggies & Giving Back T-shirts showcasing produce partner logos on the back.
“We are proud to partner with Tops to make an impact in the communities of their shoppers,” said Trish James, Healthy Family Project VP. “This campaign impacted countless families and the 80,000 meal donation will go a long way in the fight against hunger.”
In addition to in-store signage, produce partners were highlighted in targeted social media content including photography and video.

Every $1 donated to Feeding America helps secure at least 10 meals on behalf of member food banks.

As a cause marketing organization, Healthy Family Project creates programs, like Produce for Kids, that provide easy, fun and inspiring recipes and healthy ideas. Since its creation in 2002 by Shuman Farms, Healthy Family Project has raised more than $7 million to benefit children and families and provided 12 million meals through Feeding America.

Tops Markets LLC is headquartered in Williamsville, New York, and operates 157 full-service supermarkets with five additional franchise stores. It is the largest private, for-profit employer in Western New York. The company operates in New York, northern Pennsylvania and western Vermont, and has 14,500 associates.